Dublin was my next destination after 2 nights in Glasgow. Located off the shore of cointentinal UK, the only way is by air to get to Dublin. Time for some Guinness I guess! I was at the airport super early, more than 3 hours in advance for my very first Ryan Air flight and the last one as well. I will share more on the disastrous experience on Ryan Air in the next post. To sum it up, that almost took up most of my time and together with the long security lines at Glasgow Airport I barely had 20 mins in the lounge, it is going to be a rather short review. This just makes me appreciate how amazing train travels are in Europe and how easy it is. Back to the lounge! The only Priority Pass or contract lounge offering in Glasgow Airport is the Upper Deck Lounge, and it is a crowded one. Certainly it couldn’t cope with the amount of passenger in the Airport.

Upper Deck Lounge is located airside, just off the duty free shops and restaurants area on the second floor. There are clear signage. It is rather easy to get the direction then you can take the lift of the stairs to head up to the second floor. I would just like to say that this is one of the most crowded terminals I have seen in a while. Certainly reminds me of the times I was in Istanbul Ataturk and Heathrow a couple of years ago. Restaurants were packed to the brim too.

The host desk is found after existing the lift. It looks rather ordinary, well as per the norm for most the contract lounge as well. The lounge to accept other forms of entrance besides Priority Pass as well. We had some trouble accessing at first because they are doing crowd control. I have to point out that they have really weird policy since they are still accepting PP holders but only allowing people to guest 1 people. Usually they will just stop accepting people in total. At least the host is pretty polite and apologize for it. The whole place is in one retangular place and it is not a huge lounge. The whole place is packed almost like a sardine can or like a busy restaurant at peak hours. I do not really enjoy it. I have to say that I love the natural light and apron views. It would be nice if you could grab one of the tables besides the window. The whole place looks more like a restaurant rather than a lounge, most of the seatings are restaurant style dining tables. Then there are some high top seating by the side with power plugs. While it is nice that there are boarding calls in the lounge it just adds to the noise.

I would say that the refreshments is alright for a contract lounge. It is mostly just some snacks and sandwiches on offer. The tomato soup is pretty good though! Then you can find juice and sodas as well. I guess my standards are pretty low, after all I am getting in for free, it would be a different story if I am paying 28 USD for it instead. 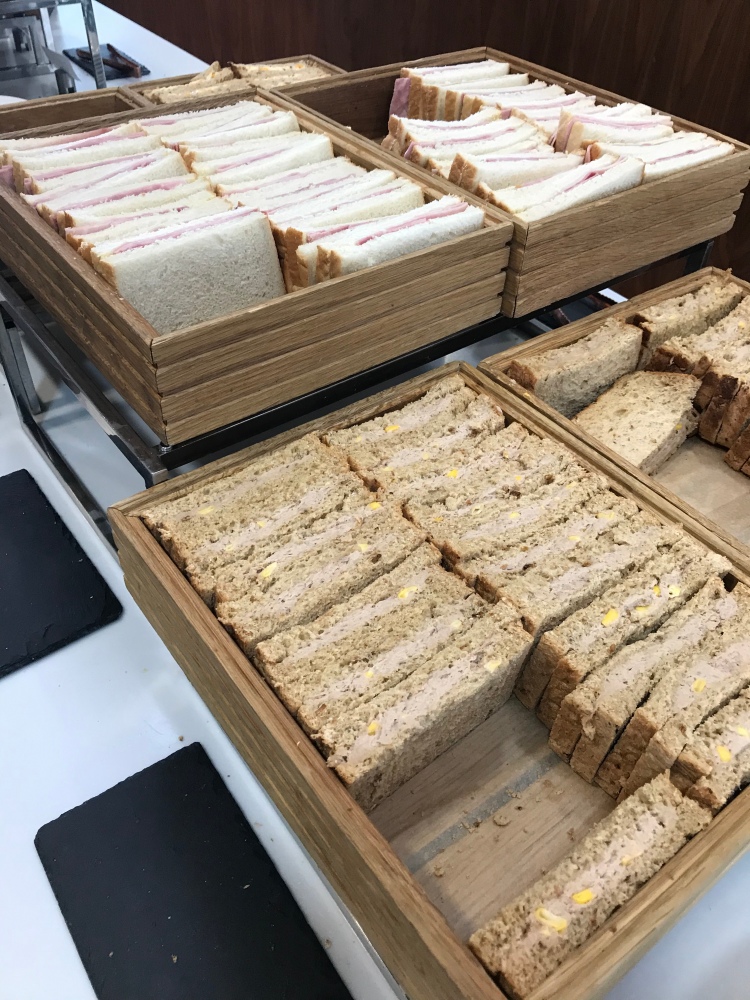 Alcoholic drinks are only available at the bar and this is probably the most impressive part of the lounge. There is a nice collection of options includings a couple of bottled beers. Although I guess they are trying to limit the exposure by placing it only at the bar and not self service.

Overall it is not too bad considering there is free drinks and the alcohol drinks are not too bad. This is also probably the only reason to come here. The lounge is as crowded and noisy as the terminal. It might be worth if you are a heavy drinker. I was having just a little thought, seeing how crowded it is and the lounge getting 28 bucks for everyone. Just how much dough they are making of it. HAHA.