I had a little trouble during the final part of my trip in the states. I guess sometimes, your plans doesn’t always goes accordingly. I have to say that I am already very glad that so far, everything have been rather peaceful up to this moment. If anyone still remember the crazy California wildfire that just went crazy and rip throughout the whole state. Yup, I was caught right in the middle of it! One of them was even super close to UCLA, and burn down houses in Bel Air. In fact after San Francisco, I was suppose to do a 2d1n drive down to Napa Valley, then make my way to Los Angeles, although after seeing footage of the Wildfire, I decided that taking a place might be much better. Thankfully I managed to cancel my car rental and hotels at no extra cost, since they understand my plight! I book a last min flight and flew Virgin America down to LAX. I will not review the flight again since it is rather similar to my previous one. Los Angeles is a huge city, with many district, in fact, no one really have a good suggestion on where to stay in LA. I decided on downtown since I could get to all the district in LA like Hollywood, Santa Monica easily. I found quite a good deal on Millenium Biltmore Los Angeles and decide to stay there.

LA is a city where the public transport is rather limited and the connections is pretty shit. While I had at first decide to take the metro down to the city, the shuttle to the station from the terminal was so crowded, in the end we just took a lyft to the hotel which cost me about 40 USD, thankfully the ride was nice enough! Millennium Biltmore Los Angeles is located right in Downtown LA, just cross the street from the metro station. The accessibility to the metro is one of the reason why I actually choose the place. I mentioned that I found quite a good deal on the rooms. The rate is about 170 USD per night, furthermore after utilising the Citi Prestige 4th night benefit. That brought it down to about 150 USD. I also had status with Millennium and before hand confirm an upgrade using one of the voucher that I had, which gave me a club room and access to the club lounge also.

The lobby was nice and grand, the hotel was located in a nice boutique charming building. The building itself has it roots from 1920s, so it had a little charm itself. I love it when these heritage buildings are being restored into something else. Recently, I even recognise the hotel from one of my favourite tv series, seems like it is one of the filming location as well. Perks of being in Hollywood, Los Angeles. It is also nice to see all the festive decorations up in the hotel. 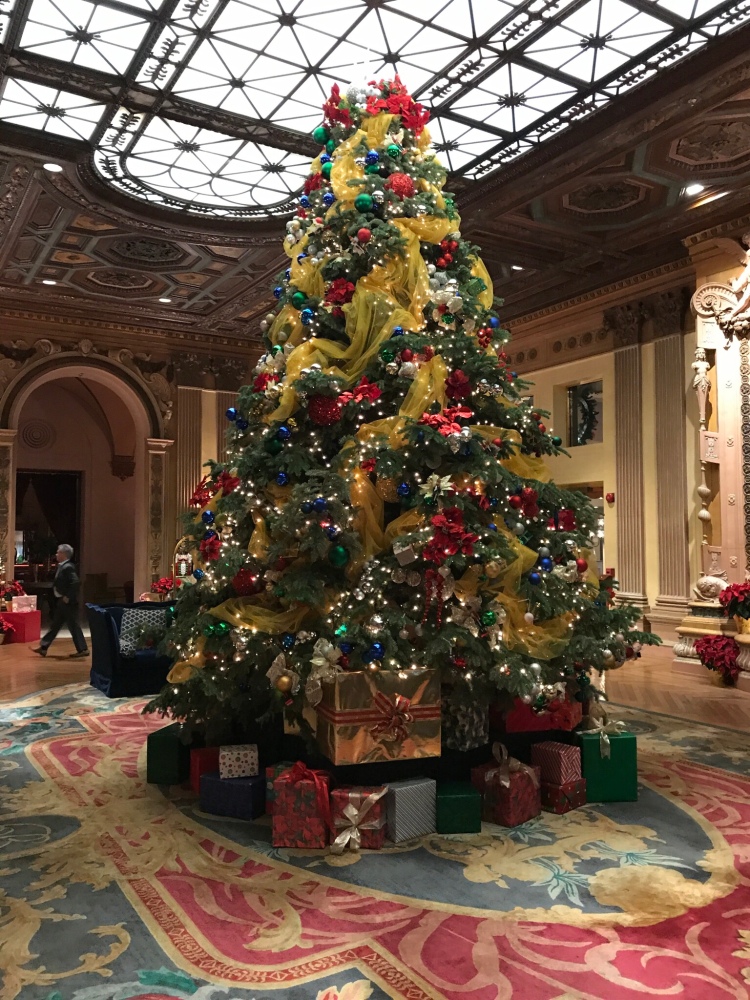 Check in was smooth although the people working the desk are kinda rude, and they made an error with the key card which results in another trip down to the reception, which is kind of annoying. 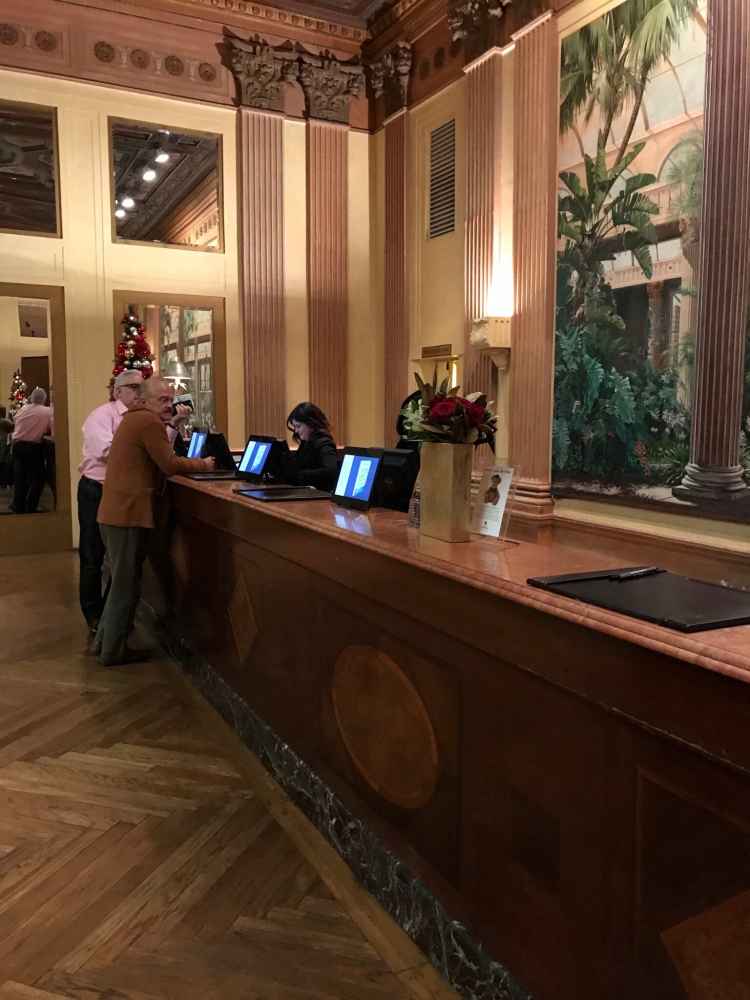 My room is located on the club floor, which is the level where the club lounge is also located at. I will share more of the club lounge in a short while. I love that the corridor felt fresh, as the norm in this hotel, it does not seem new, but definitely well kept. The corridor are mainly in white, which goes well with the style of the hotel.

Mine was a double club room and it was of a fair size. Immediately after entering, the toilet is to the left and the wardrobe is to the right. Then you have the tv console, as well as a little coffee machine. Do note that there is no fridge in the room! Is this a common thing in the country? Let me know! You can request one to be brought up if you need it!

Then you have the two plush double bed that was really comfy. I really like the beds in American hotels, they always felt so plush and comfy. Then at the far end, you can find a working desk. 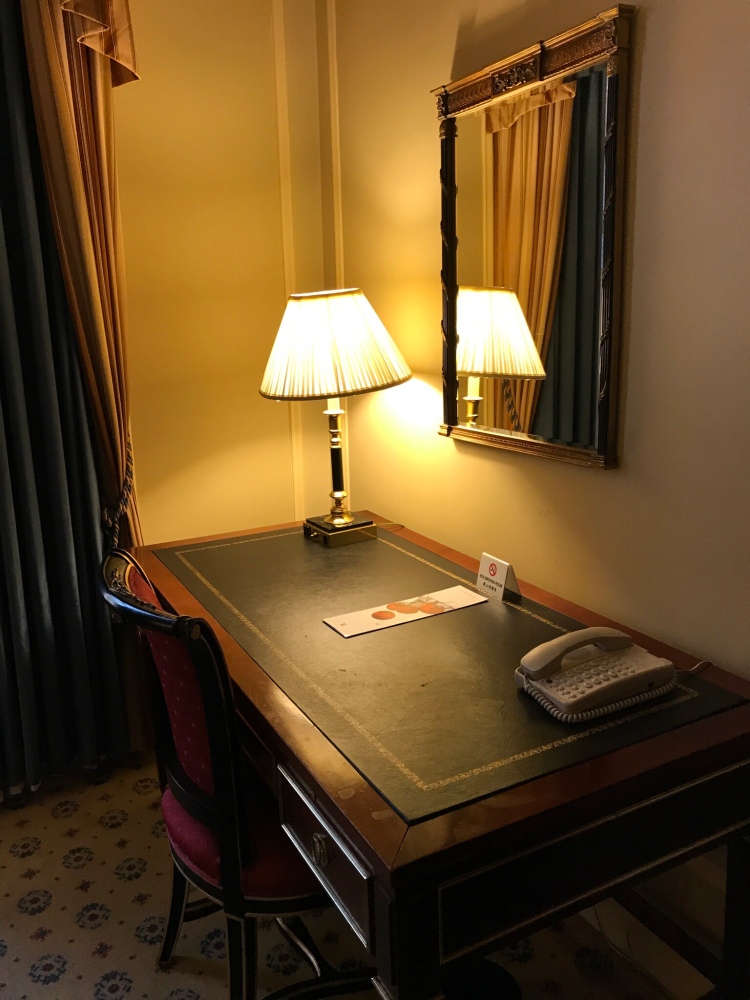 The wifi in the room was also steady and fast, which is something that I appreciate. Although they still make the same oversight of not having outlets by the bed. I can’t comprehend why hotels always get this wrong! The room size was decent, although not huge by any margin. I have enjoyed room of larger size. In fact, nothing can be compared by the size of the room I had in Vegas.

The toilet was on the smaller side and clearly in need of renovation. It is old! They should also improve their offering in the hotel, normal hotel brands toiletries in a club room is simply not going to cut it out. From the looks of it. Besides the club access and the fact that it is on the club floor, I don’t see any difference from a normal room and a club room at all? Another annoying fact is the fixed shower head as well. Although I do have to say the water pressure was decent!

Next I would like to share the club lounge, which I had access to. The club lounge is just steps away from my room. I visited the lounge daily for evening drinks as well as breakfast! This is clearly the best benefit for having a club room, since other that that, I don’t see any clear difference! The club lounge was quaint and nice, it is a small boutique space, but pretty classy and nice to work in. I was here first in the evening for the cocktails. It never gets too crowded, and there is never more than 10 person in the lounge at all  in the evening. There are different kind of seatings there, including tables, sofas.

During the evening receptions there are fruits, some cheese and veg with dip. A couple of hot entries. It is definitely not a substitute for dinner since the offering were little. Although I was glad that they change the entries day to day. Sometimes it was some samosa, spring rolls, they have some dim sum on other days as well. Drink wise, there are a couple of wine, 2 types of beers, soft drinks, juice and that is all. Very very limited, no wonder there isn’t a crowd. 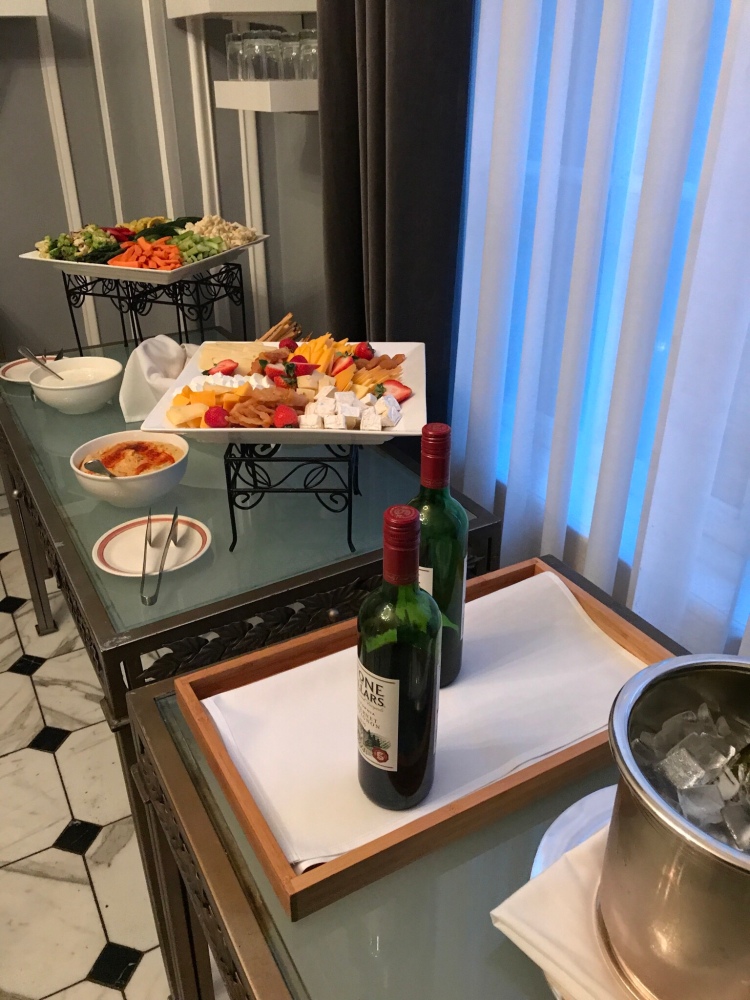 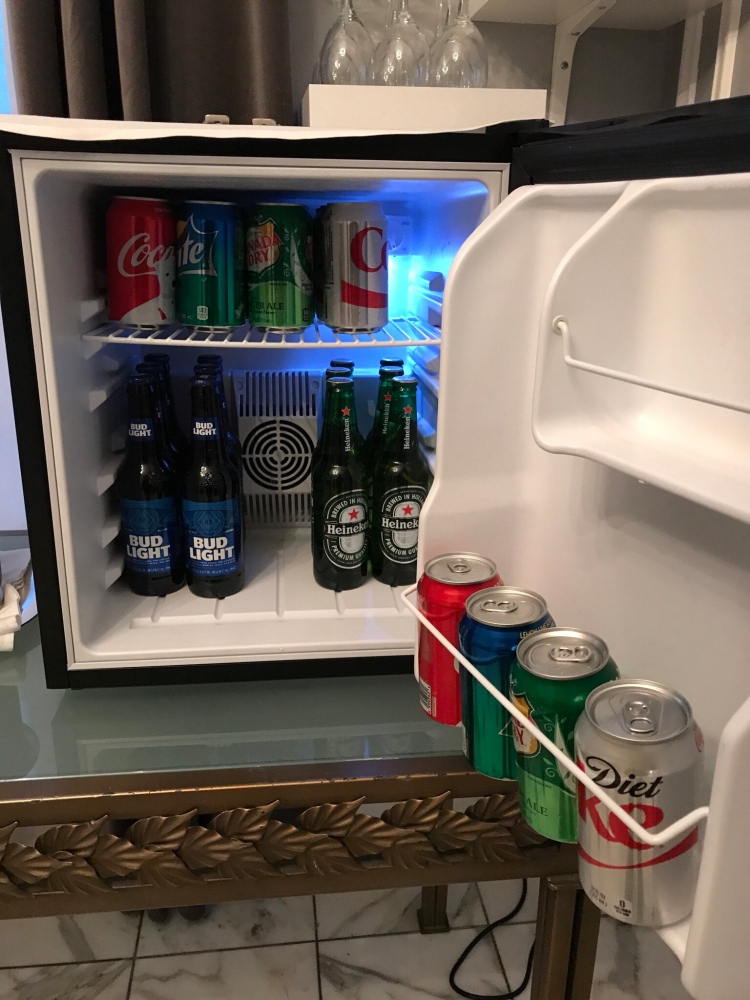 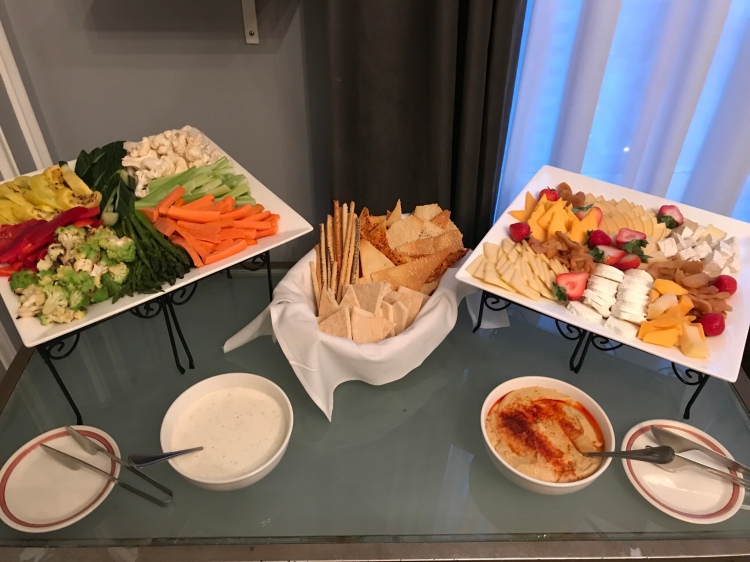 On the next morning, I was there for breakfast. As per usual, it is more of a continental breakfast. While not the best, it is still nice to be able to have a cup of coffee and a small bite before you head off for your travels. Seemingly, in comparison to the evening reception, there is far more crowded and people seems to be really enjoying the space more. There is a salad bar, some fresh cut fruits. Cereals, cheese, ham. The options are not much, but everything felt so fresh and high quality. The best thing from the breakfast were their pastries, they were so fresh and tasty. It seems that they were just out from the bakery. They had this almond danish that is so lovely. 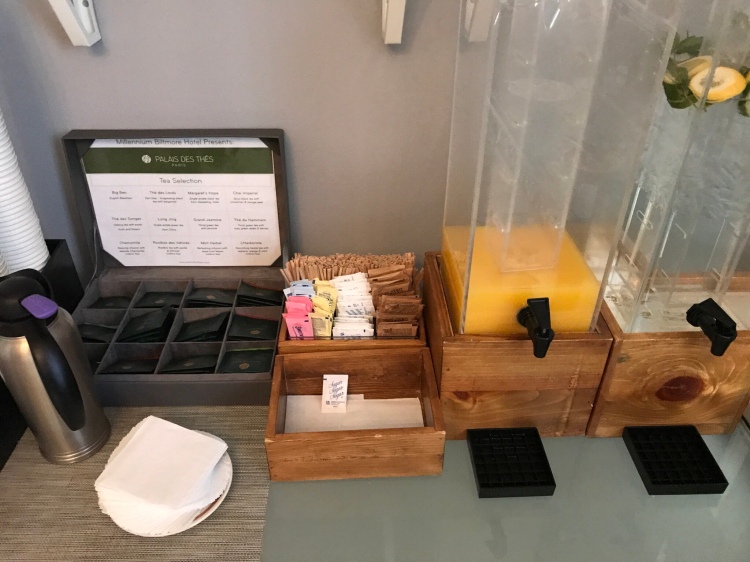 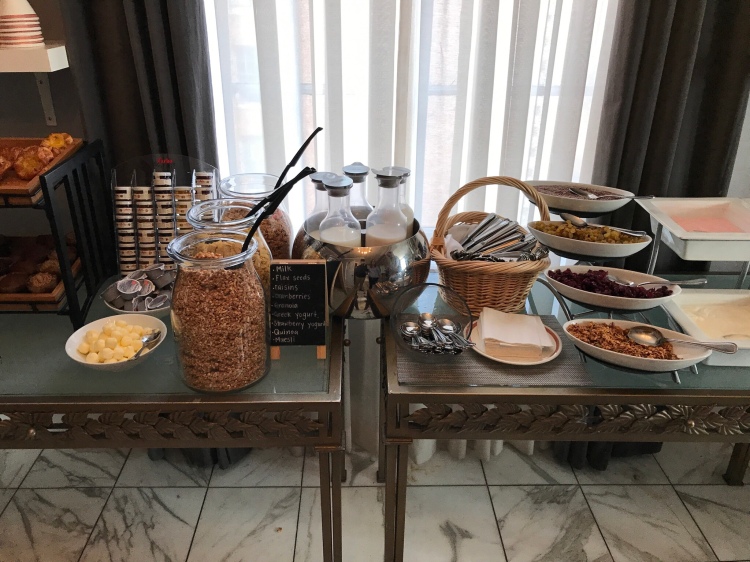 All in all, I think that the Millennium Biltmore is a nice hotel to stay in. But the key question for all the travellers is, where in LA do you want to stay in! However for the price that I am paying, it seems that I am not getting much in return! The hotels still lack in certain areas and offerings. The advantage is the location of the place. Club lounge wise, the best I had was at the Grand Hyatt in Bangkok, nothing can be compared to it. In the states this trip, Hilton Seattle is so much better. Given another trip in the future, I might choose to try out some other hotels if I am ever in LA again! Stay tuned next for a very interesting sharing!