Fly Emirates! The most hip about airline in the last decade. It is also the aitline where you would have no issue seeing a crew with more than 15 to 20 nationality. To say it being internationalise or cosmopolitan, you definitely won’t go wrong here. Not withstanding the bling and glamour, Emirates is also the largest operator of A380 and the 777. My previous flight on Emirates was to Madrid back in 2013, it’s been some time, which make me keen to see how their service and products are currently. As mentioned in the previous post, the gate was only a short walk away from the Plaza Premium Lounge. But before it start, the flight is already being delay slightly. I am however keen to see how Emirates goes up against Emirates and the service differential between the both airline.

As per the norm, it was a huge plane with many passengers, given that this is an A380. Boarding is crowded but orderly and in priority of your boarding group. The flight was almost full as I can see. Economy Class are on the lower level of the plane, right behind the gorgeous stairwell that leads to the upper level. Seating is in a 3 – 4 – 3 configuration, which seems to be the standard across the airlines. Although not as good as 9 per row, the seats on board this plane seemingly seems to be fresh and new, perhaps I had not been on an Emirates plane for some time, the screens are even better than the past and really huge and good definition. The screen are huge, definitely better than my last Emirates and also SQ flight. Superb. Through the back of the plane, there is a spiral staircase that leads up to the business class at the back. 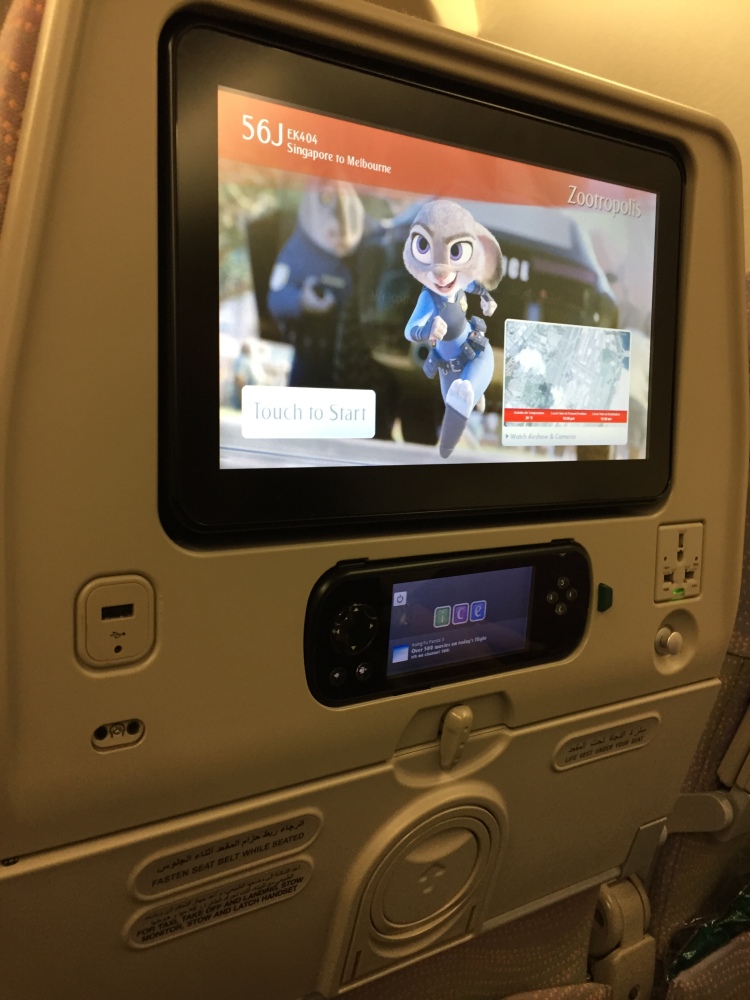 After boarding has completed, the iconic Emirates cabin crew begin making their rounds, doing safety check and also giving out the menus and a “Refreshing Towel”. The Towel aren’t those freshly warmed or prepared ones but rather a packaged wet wipes as we know. This is rather a disappointment, given that they previously do prepared hot towels for customers and others airlines too do the same. The crew that work my aisle were a Korean and a lady from Poland. I would share a little more on the service and soft product later.

Above is a picture of the menu for the service, dinner was being served roughly around an hour after take off. With the special meals being served first before the cart was rolled down the aisle. While awaiting for the service, being onboard Emirates, you definitely won’t be bored. Although I was a tat puzzled that this flight doesn’t have any inflight magazines on the seats. However the really awesome ICE Entertainment system makes up for everything. In terms of comparasion, Emirates has the most comprehensive inflight entertainment ever! The system usually has the most up to date movies and the top hits, from hollywood to arabic to chinese and korean shows. Pratically the system has more than enough shows to fly non stop around the globe. Dinner for tonight was a choice between Mongolian Chicken and Baked Perch Fillet. The chicken came with fried rice and stir fried vegs while the Perch which I choose came with steamed potatoes, carrots and peas, drizzled with a delicious hollandaise sauce.

I really enjoyed the potatoes and the sauce, despite the sauce being a little too much and fully drenched, was a great pairing with the potatoes. The fish were well cooked and not dry but pretty disappointing since the fish was way too fishy for my liking. I accompanied the dish with a white wine and also a orange juice. One great thing about Emirates economy class service is the portion. It is really filling, not withstanding the starter and the dessert which was a tasty Dutch Apple Cake, the tray also include a snack pack, consists of biscuit along with some Bell peppers dips. I would just like to point out their tray size, given the offering, the tray is small given the amount of stuff on it. Given that the table size are much larger, sometimes I do wonder why can’t they design a larger or even a longer tray, a longer will make more sense as the tray will need to be able to fit on the serving cart that they already have.

I got this feeling that Emirates, in the recent years have been trying to do marketing and promoting their airline through their employees, specifically their cabin crew. Trying to convey the fact how cosmopolitan and the advantages of having an international crew. However I do not really think that it is a success, they are trying a little too hard, such as modifying their welcome purser message with numbers of nationality and languages they speak. Yes it is an advantage that most likely one or more of the crew speaks a language that you understand. However I feel that, yes, the crew are well trained and polished, but it is lacking a little human touch and bonds. It feel a little robotic and cold. Although this may be a single sole flight. The Korean crew that was working my aisle is simply cold and a little rude when I wanted to borrow a pen. The only airline that I know of, being successful of “Crew Marketing” is only SQ! 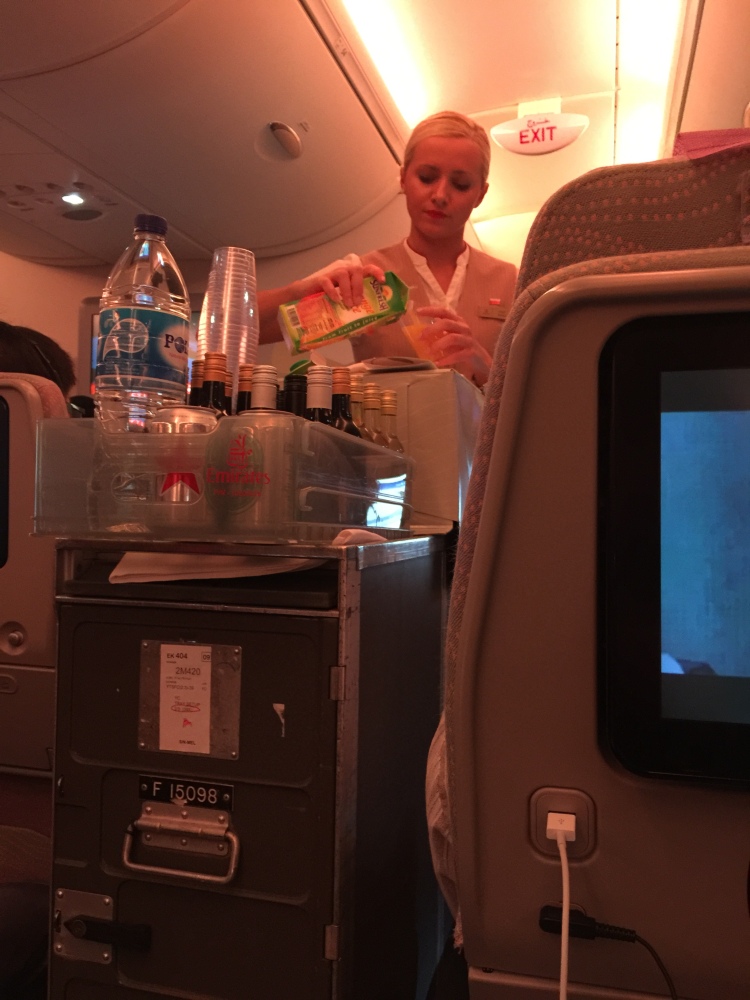 Since my birthday was a couple days after this flight and me being wanting to compare the service between Emirates and SQ, I had earlier emailed in for a request of a cake onboard, which I know that SQ provides. Another of my travelling party gave my seat and reference number and Emirates emailed back to note the request, even said a champagne bottle could be ordered. However since that, I have not heard anything about it and nothing happened on the flight. Something weird to leave people hanging. One a good side, Wifi are available on board all A380 flights and the plan are affordable, the first 10mb are free with the next 500mb coming at $1. Although the speed is extremely slow, what’s app still work though.

Continental breakfast, consisting of fruits and croissant and a muffin are served prior to landing. It tasted stale though. I am keeping a surprise regarding the product and would let you know the difference once the review of my return flight from Melbourne is released. Have you guys been on Emirates? What do you think of the self proclaimed new leader in aviation.