Nope, there isn’t a airline called Renfe, neither is it a brand new airline that you hadn’t heard before! This post may be one of the unique ones where I am reviewing a train ride. Yes, travelling via train! With the technological advancement, train ride have definitely become desolate, especially in places such as South East Asia and the States, even in Australia people do not travel by Train. For most Singaporeans, train are a thing for the past, which reminds them of the old, noisy and stinky train from Singapore to Malaysia! Even though I love flying, within Europe I will most probably take and consider trains connection first! With many countries having open borders and well established train routes, travelling via train is such an effective way of getting around places! Actually, it is the preferred method of getting around Europe, even better than a plane ride! This is why sometimes plane tickets may be even cheaper than a train ticket. In Europe, train station are usually located in the hub of the city, usually right smack in the centre! With connections to the public transport it is easy! Rather than airports which are usually far from the city and requires costly connections! In Munich, a cab ride from the airport to the city cost upwards of 50 Euros! Thus it is important to factor the travelling cost when considering options! Another reason why people love trains is due to the efficiency of it! Basically you could just drag your luggage to the train, with liquids, alcohol and stuff, not like a plane and you just gotta be on time at the train station. Europe trains are rarely late, departing right on the dot, within mins. 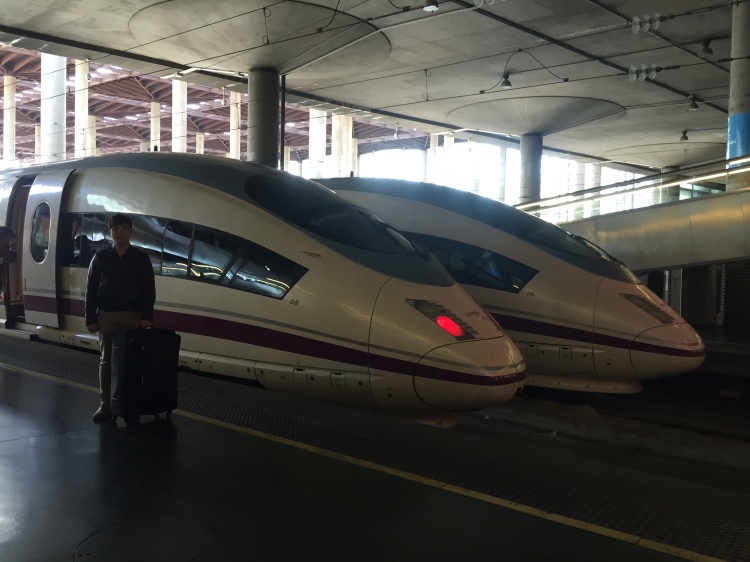 There are many types of train in Europe, from the cheapest regional and intercity trains to well known high speed train such as the German DB ICE train and in this case, Spain Renfe AVE train. High speed train are expensive, although cheaper tickets are available when booked in advance, you just have to print the tickets online and then just be at the train station to check the track the train will be on! These high speed train travels up to 400km per hour and for this ride of mine, it took only about 2 hours.

Trains are classify as First Class or Second Class. First Class usually provides more leg space and service from the crew, usually with a meal option included in your ticket! It might also include an area or lounge before boarding the train! Second Class, also known as traveller class are the normal train tickets, with ample leg space and also place for your luggage. Personally, I feel that the seat width and leg space are more than sufficient, even better than economy plane rides which I would say! In Europe trains, the seat arrangement might be different throughout, some are the normal front facing seats, and some might be one row forward facing one backwards facing! This will result in 4 seats around a table. The configuration in First Class are usually 2-1 while in Second Class are 2-2.

From Sol to Madrid Atocha Station is a direct metro ride which I am able to reach in about 10 mins! The only difficulty is that the metro station might have some stairs, which is something to take note of. Atocha is a beautiful station. You are able to check the screens for the gate to be at, and the gate usually open after the train has arrived, usually about 10 mins prior to the departure time. Never ever be late cause the train would just leave without you! Luggage racks are usually at the front of each cabins and small bags can also be put on the racks located at the top of the seats! Usually I will go for Train ride only if it is a direct train and the journey is 6 hours or less, more than that is just way to long! Another benefit of taking the train would be the scenery instead of just the clouds that you get from taking a plane! There is also a snack cabin in the train, although I didn’t visit it!

Check out some of the views here, from Madrid to the Catalan and soon I am already in Barcelona Sants Station. A brand new city for me to check out! Do you guys prefer taking a plane or a train? Let me know!