Definitely a jade that deserved the effort to be found among the numerous cafes in Hong Kong or more known as Cha Can Ting, a mixture of the east and west, just like the city of Istanbul. Influenced by the British whom used governs the city for a century, in the past only the rich and affluent or the westerners gets to dine at a restaurant while the locals and labours rarely have the chance to do so. This is how this style of dining came up. Using local products but influences from the westerners, Cha Can Ting, provides speedy and no fills meals, where you can find local food stuff as well as western meals such as baked rice and steak. 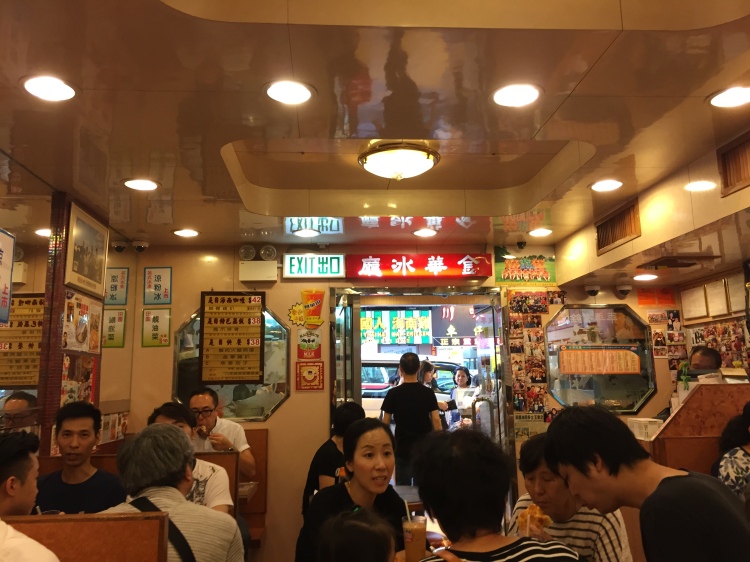 Some of the popular dishes are a fusion too, like the favourite red bean drink with ice cream, Macaroni pasta in soup with eggs and meat. Stir fried food and roast meats are also served. For most of the Hongkongers, this is the place that they go to for their everyday meals. Affordable and delicious. Having a meal in Hong Kong or Cha Can Ting is an experience, you would also have to be used to the culture here. A bustling and noisy place, with most people eating in a rush. Along with most eateries in Hong Kong, due to expensive land prices, most places are seemly cramped, small tables and benched that are so close to it that your knees will easily bump into it. Most have an min order amount and you are also expected to share tables with strangers during rush hour. Being a first timers, I would not guarantee that you will enjoy the meal, but it is actually a delight to hear all those Cantonese conversation, having piping hot no fills meal served at a rush. The food is delicious and full of flavour, people rushing for lunch or coming in to have a break during their tea time, more commonly known as “san dian yi ke”, a quarter pass 3, where the working crowd come for a snack to go along with their tea or coffee, having a rest at the same time. To go in line with the fast pace dining, there are numerous menus on the walls. 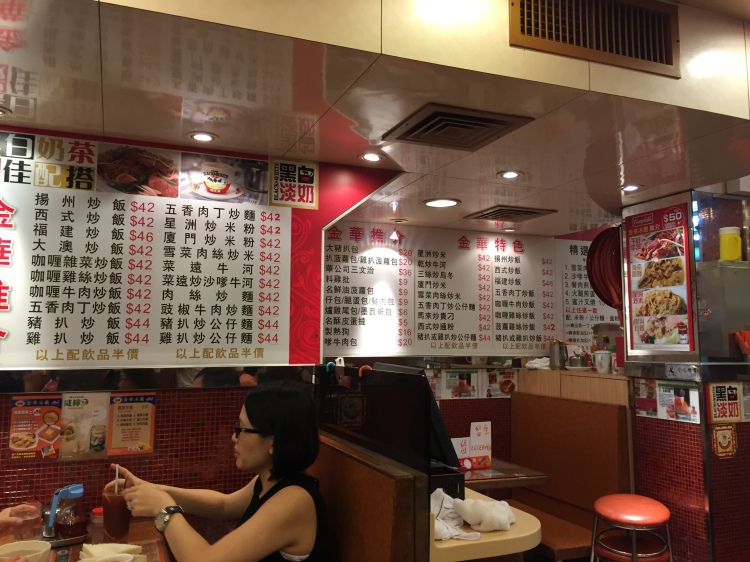 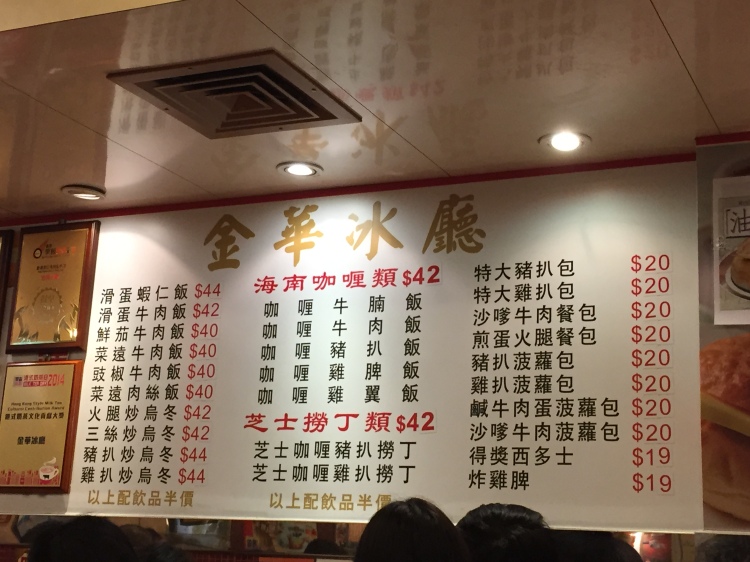 Having some basic Chinese knowledge or speaking Cantonese would be especially useful in ordering items but it won’t be too hard to point and order too, with the numerous options on the menu and customers on the seats all day long, it won’t be too hard to see something that is tempting to you and try to order one for yourself too. Items are cheap by western countries standards and a little pricier than Singapore hawkers, with a dish usually cost around 6-7 SGD. Most of the time, there will be a sort of set for the dishes you ordered, with the sets making it more worth it. Usually a drink will be in it for a dollar or 2 or changing it to a cold one. Sometimes a soup will be included too, with a Western or Chinese choice, Borsch being Western and some boiled soup being the Chinese choice. Another main food item in Cha Can Ting would be their silken smooth milk tea and also French toast. The French toast is perfect for afternoon tea, fried and sweet with a drizzle of honey and a slice of butter, just a little heavy on the heart. Now back to Kam Wah Cafe, it is located in Mongkok, on Bute Street, why so special that I have to recommend this place out of the numerous ones? It is because of its egg tarts and pineapple bun, pineapple buns may requires more clarification from my side. Nope, it is not a pineapple flavour bread, but a bread that has an amazing crust that looks like exterior of a pineapple. Crispy and buttery is the bread here, the crust is made with sugar and butter, simple as it is but definitely hard to get one that is this tasteful at Kam Wah. Be carefully of dirtying your clothes, with the crumbs all over you after biting eat. 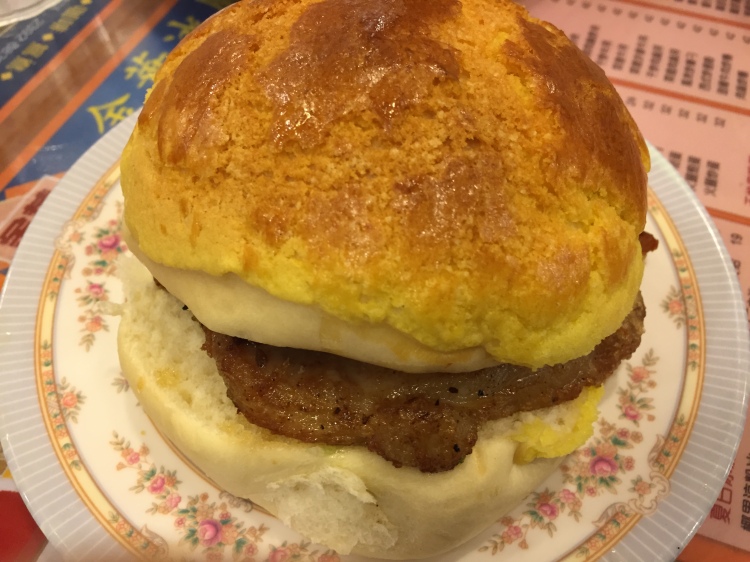 The must get food here will definitely be the egg tarts, flaky and buttery, followed by a soft piping hot sweet egg custard in the middle. The crust is just so crispy and buttery that you can taste each and every layer of the folio pastry. Just that skills for that old chefs, time to eat it soon before it becomes an lost art. This is so good that I bought 2 dozens back to Singapore on my day of departure. If you are a fan of Hong Kong movies or drama, you will frequently hear the locals having an egg tart to go with their tea or a bo luo yao, which is the pineapple bun with a huge thick slice of butter in the middle. the food probably isn’t too healthy, given that it is made with lard, but hey, sometimes it’s okay. If you ever came here, you got to order these 2 items for a try. Once bitten, always attracted, love can’t be explained! But thank god, this relationship isn’t expensive to maintain. Only costing 5HKD each, which is slightly under 1SGD. Cheap and delicious. 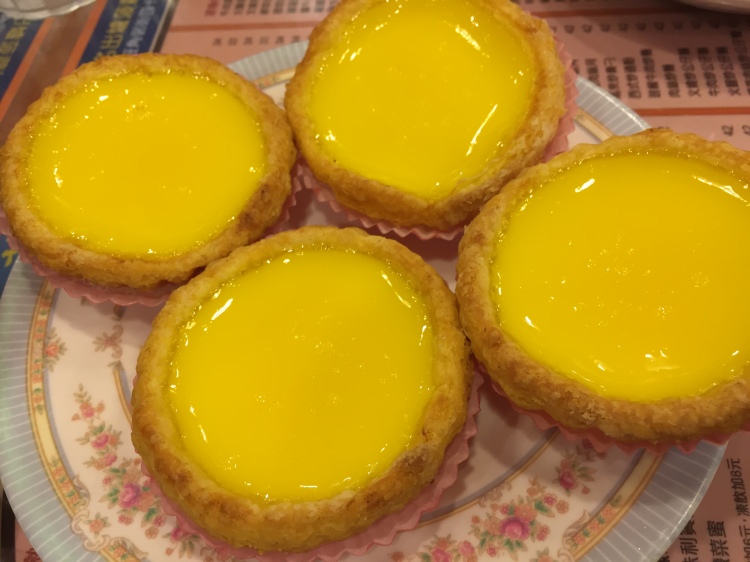 The cafe is open early in the morning till late, serving awesome meals from a western breakfast to claypot dishes. Besides the 2 pastry dishes that I highly recommend here are also some of the food that I have ordered. The portion are huge and could easily feed you up. I will recommend the pork chops and chicken chops too, which are well marinated and also tender, I especially love the fried udon. Eating in a Cha Can Ting is also cheap, for the 4 of us, we always came in hungry and out full to the brink. The damage? At most 30SGD for all, with drinks too.
If you are here one day, the egg tarts are a sure get, just remember to buy me some on the way back too. The taste of the flaky buttery pastry is still so embedded in my mind even till today!