Perhaps it may be my third time flying it but the excitement definitely doesn’t die down, I am just such a loyal fan to Singapore Airlines, sorry guys, I am just that fan boy. I will dare say that i do know Singapore Airlines very well in the offering and products including their company information. To say,  I actually know quite a few people, directly or indirectly that are working for Singapore Airlines, from flying crews to their office staff. Congrats SIA, you have definitely won me over! I am also super glad to say that I am living in an air hub of such a great airline, you are and will be my number one choice forever, A Great Way To Fly! I actually knew from Josie that actually all the “n” in Singapore Airlines official logo or name are in small caps, heard that it was some fung shui reason.

Aright, back to this particular flight, although the hard product is the same as my previous experience the rest is actually all different. First of all the crew which was amazing! Any Singapore Cabin crews will make your day or flight a even better one. Then this time it was a day flight, which means that the meal service will be Brunch, so keen to see how different it will be. Although it was only a short flight of 4hrs, I had the best of my life on board! hey, any flight on SQ, it is a short flight to me, can I fly to the moon in the Suites with the always amazing cabin crew?

As mentioned previously, my flight was delayed and pushed back for around an hour, apparently due to a late arriving aircraft. Unlike the recently disaster Scoot delay handling, SQ handling of it, perhaps to me was actually great I would say and customized. Any customer service or I would say bad news informing with a high feeling of human touch is a great one. SIA staff are really well polished. Actually, an hour of delay won’t be a huge inconvenience at all to me after all the SilverKris Lounge was marvellous!

I actually boarded late, only on the final call, so missed out on the priority boarding for premium customers. For the benefit of the others, SQ board in order of Suites/First Class & PPS Club Members, Business Class & KrisFlyer/Star Alliance Gold Members, Economy Class by rows respectively. It is actually perfect when you can board first without queueing but even if I am only flying Economy I will always board the last, really pointless to stand and queue.

Following on, I am actually slightly disappointed by the service standard of the cabin crew, only this part, the rest of the flight was absolutely perfect. Upon boarding at the door, I was addressed by name and welcomed on board by at least 4 cabin crews, to my surprised, I was actually not offered an escort to my seat. Frankly speaking, I won’t have mind it after all I am quite familiar with the cabin. This is one of the difference when flying in the A380 rather than the 777-200 and also in a 3 class cabin vs a 2 class cabin. In a 2 class cabin you get the most attentive service and also the highest priority, but this may not be the case where there is First Class. Why was I disappointed? This is because when I found my seat there was actually this guy seated in it, I doubled check and then I had to go get a stewardess to do the necessary informing. Probably only a slight issue, but definitely not expecting it on SQ, however I would say that it was the weird guy fault. I am actually sorry to hear the kind stewardess apologizing to me. That guy is really weird, after being inform by her, he went to another seat, but that isn’t his allocated seat! Just weird. A glass of champagne was definitely the right way to start the flight!

The A380 is just so different, with the cabin looking so spacious even though Business Class is located in the Upper deck. It’s helped by the lack of overhead bin in the middle with makes a higher ceiling, even without that there are more than enough space for your carry on. For SQ A380 Upper deck, it consists of the Business Class at the front and the Economy Class filling the rest. Here are also some of the other pictures of the cabin.

Champagne, Hot Towel, Magazines, Eyeshades nd Slippers that was just the beginning, the real treat has yet to come. Soon, the stewardess came around to take meal orders and also a after take off drink. My book the cook Lobster Thermidor meal was confirmed and I gladly went with a glass of Germany Riesling. Seriously, there is nothing better than the Lobster Thermidor in SQ. Meanwhile, here are the pictures of the Business Class Menu for the flight. 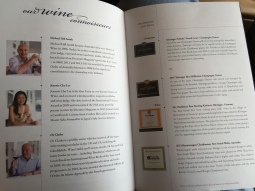 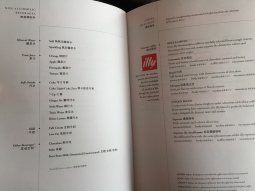 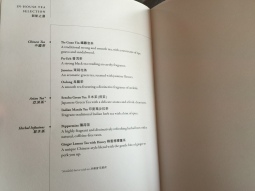 The polished crew place down a crisp white table cloth before setting up the cutlery, the meal started with a fruit platter which was simple yet amazingly good which I had a glass of champagne to go with. Perhaps you guys have known that I really love having a champagne brunch. It is worth noting that the Taittinger Prelude Grand Crus Champagne was served on board.

Then there was my saliva inducing Lobster Thermidor, doesn’t it look great? I went back to the Riesling for this course as It seems that the crisp light white wine was a better complement. I also had an croissant to go with the meal.

The meal ended with a chocolate cake and I ordered a glass of baileys with coffee to go with it. Perfect ending to any meal. 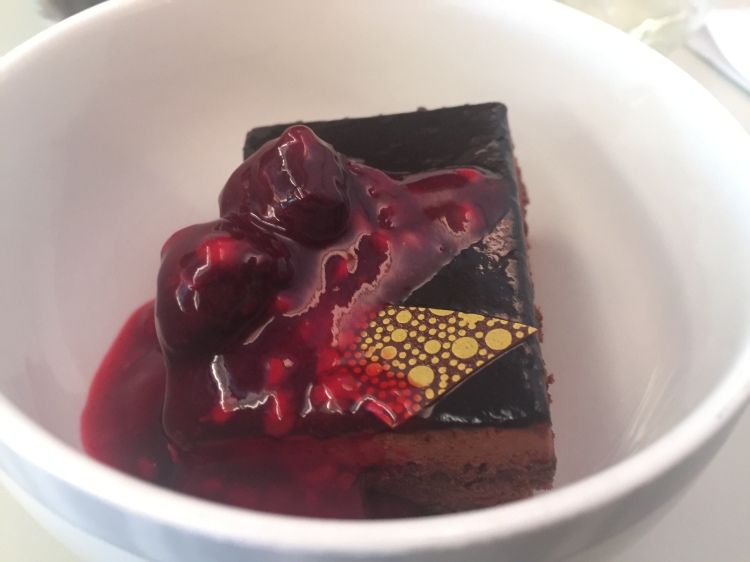 Soon, landing was announce and I doze off till we touch down, what a smooth ending it must be.