To speak frankly, the flights to and fro Istanbul was the major highlight of this trip, after all, what else beats the ability to fly onboard Business Class on Singapore airlines for 12 hours nonstop. Before I start on the actual experience on ground and onboard the aircraft I would share a bit on the booking of the flight. To maximise the chances of getting all 3 person on Saver class redemption, I had split up the booking into 6, for our whole family and also all one way redemption booking. This actual means that as long as there is a empty seat on one sector, the waitlist will be release to you. Due to the fact that I had a pretty low frequent flyer status my waitlist didn’t really clear out. Although I already had 2 confirmed both ways as I make the booking pretty early, about one month in advance. Thankfully, due to my waitlist flight, I had no ticketing deadline for my redemption, this could be done by calling KrisFlyer Contact centre. Practically, I hold my hopes to the last min, calling almost every day and also a few times on my departure day to sent chaser. With common sense, you could know that there is obviously empty seats which I actually could see online, thru my confirmed booking seats selection. There are also holding out to the last min to see if anyone will be paying for them L. Around the evening, hopes seems slim and I decide to issue my economy class tickets, as it’s getting awfully dangerous to go to the airport without a confirm ticket. However, ……lady luck seems to be shinning on me……

With my complimentary airport transfer, regards from CitiPrestige Card, I arrived slightly past 9pm at Changi Airport Terminal 3. Thinking that it actually won’t hurt to be nice, put on a nice smile, be courteous, I decided to try my luck at the ticketing counter. I explained my situation to one of the Singapore Airlines ground staff, although I won’t say that she is especially nice and helpful, but after some waiting and clicking, she told me that “the business class cabin isn’t really full, we should be able to clear your waitlist, just proceed on to the check in counter”. Her words were like adrenaline to me, and my hopes were up, with that I proceed on to the Business Class Check in Counter. I did some of my self-learned mind reading and choose this counter, hopefully that I accurately predicted to be the nicest staff among the rest. After some explanation, he agreed to do it for me. Oh Thank God. If not the flight would be a torture rather than an enjoyment. Although some time were wasted, close to 30mins, but it really doesn’t matters, because I got the seat. The staff actually use the commercial availability to give the seats to me and I had to call KF myself to top up the require miles for the upgrade and soon I was on my way to the SilverKris Lounge. Singapore Airlines have both SilverKris and the KrisFlyer Gold Lounge. SilverKris are for Biz, First Class passenger and also PPS Club members, SQ highest tier frequent flyer program while the Krisflyer Gold Lounge are for KF Gold member travelling on economy class. 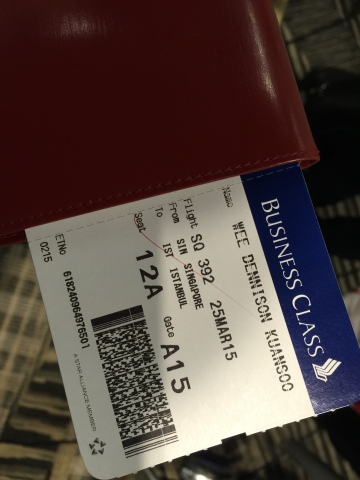 I had planned to visit the lounge, while my mum wanted to get something from the duty free, thus we arrived well in advance of the 1am departure time. Once clearing customs we proceed to the shops to get what was needed after that it’s the lounge. It is worth noting that security checks are done at each gate, which I will share on with you later. This is when I saw the power of holding on to the blue boarding pass, while holding on to my passport and the boarding pass, at the overly staffed entrance of the SilverKris Lounge, we were just waved in after the greetings. They do not even border to check it or scan the passes. An escort was not provided which makes it easy for us to sneak to the first class area of the lounge, although I do not dare to. Despite being quite crowded, due to the number of late night departures to European destination the lounge was huge, we found an area and managed to put our things down before I checked out this amazing place. Dinner was served with both international and local cuisine. There was beers, wines, champagne, sprites. Coffee, tea, juices and soft drinks was also provided. Since I had not ate, I proceed to grab some Salmon, drumlets and braised meat and some cakes, seems a lot ? But it washed down pretty fine with the glasses of Champagne that I had, after that I even made my own mimosa. If you are interested, they serve Charles Heidsieck, which was perfectly drinkable. Besides having a ticketing area to help customers with any booking issues, there was also a business centre lined up with huge Macs for usage, staff also patrols the lounge, offering IPads for passengers to use and surf the net. The Ticketing staff were also efficient and effective as I went over to actually link up my baggage all the way from Singapore to Munich. 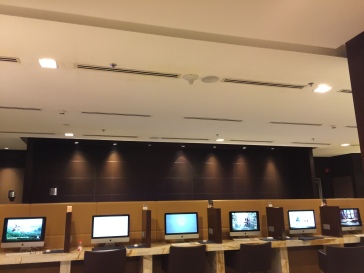 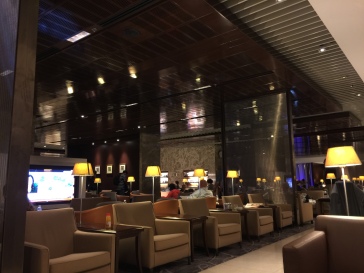 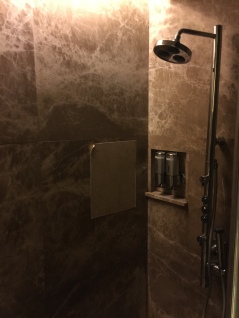 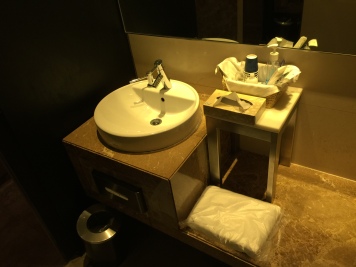 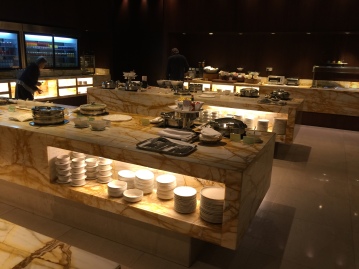 With some time to burn, I went to explore the toilet and other parts of the lounge, although something scary happen, news begin to filter thru that a GermanWings flight has crash into the alps, yet another plane crash, yet another A320. This actually affect me a lot, after all I am about to fly soon and also transiting to Lufthansa from Istanbul to Munich. For you guys who didn’t know, Lufthansa is the parent company of GermanWings. And yes, my flight is a A320, this is even more worrying for me, as at that point of time, everyone was speculating, and every time technical issue is the most common reason. I am so afraid that all A320 planes would be grounded, which would create chaos in Europe again and my flight would sure be cancelled. Actually, all of my internal flights in Europe was A320. Says about that. I keep monitoring my flight details from Singapore all the way till in Istanbul.
Seeing that my gate is actually quite a walk, I depart at about midnight and slowly make our way to the gate, after a short sky train transfer, we were there, but there was a long long queue due to the security check. But Thankfully, the power of the blue came again. I should probably paint my boarding pass blue when I fly economy next time. In no time, boarding was called and as usual everyone disregards the instruction of boarding priority and all passenger crowd at the entrance area. Yes! You got it, the power of the blue again. After making our ways thru the people waiting to board, we walk straight pass into the aerobridge, disregarding the eyes people had on us. Frankly speaking, I really find it pointless, when I am flying economy, which is most of the time, I will just sit down and be one of the last to board. No crowd and no queuing. Nevertheless, we soon found ourselves in paradise?

Something to ponder before my upcoming flight review, would you prefer to fly on a 2 class or 3 class cabin? On a jumbo jet like the A380 or a normal size one like the 777-200? Stay tuned for my thoughts on the service differential on the above questions.