As this post goes on, be prepared to be wow, be enlighten because you will never expect this to come from a company called American Airlines. You will be impressed! This lounge and product is definitely a game changer in the country and in fact elevate it it standing among the Big 3. In fact in the recent times, both AA and United have repackage their premium products as Flagship and Polaris respectively. Leaving Delta way behind! The Flagship represents a new milestone for the company, from Flagship First Class to Flagship Check In as well as their Flagship Lounge. In this post I would like to cover my visit to the Flagship Lounge JFK which will blow your mind off. It is such a leap above the old Admirals Club and in fact, you will see so soon since I will be sharing the Admirals Club!

Against the calls of my wallet, I have decide against taking the Subway and instead got a transfer which cost me about 50USD. Traffic was pretty smooth and definitely better than expected. I actually arrive at about 5.45pm way earlier than the opening timing for checking in which is at 6.20pm. Cathay only opens up 3.5 hours ahead. There was already a line forming up although First Class remains empty. Although, only one counter was operating. I was promptly attended to and upon a little small talk with the lady, she actually came down to start earlier and was totally regretting that decision since there were such a long line! Security was pretty smooth and it took me about 10 mins. Something still ponders me till today that when in the states, when you are leaving the country, you actually do not need to pass by immigrations, since the do it by getting the manifest from airlines. Sounds like a pretty great move. I wonder if more countries could do the same! The Flagship Lounge location is awesome, after all this is mostly a AA terminal. It is steps away from security and you can find the signs to the lift. The Flagship Lounge is located right above the main terminal. I am really excited and hype up for this, although US airlines are not well known for anything, or perhaps just famous for being “bad”! I really heard good views on the the Flagship Lounge series. 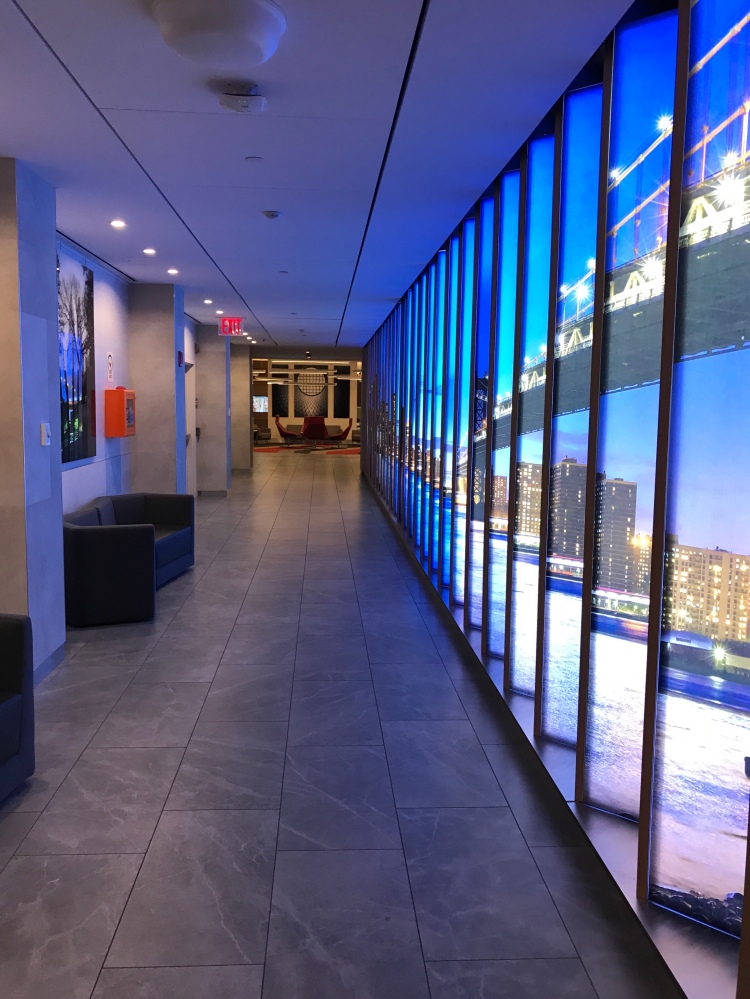 I am glad that check in open up much earlier and I had additional time to spend in the lounge. Before you enter the lounge, there is a couple of attendant in some counters to verify your access. The main Flagship lounge is located to the left and there is a gorgeous walkway and corridor with an amazing presentations of NYC. It is nice to see that they showcase the city that they are in. While the other extension of the lounge is to the right and it is known as the Flagship Bridge, I will share on that later on. The Flagship Lounge is a mix First and Business Class Lounge. Oneworld elites and AA customer get access, although for AA it does get a little complicated. I shall not steer into that. Clear difference is that the First Class passenger get access to Flagship First Dining, which I will share in a separate post. I was in the lounge at around 6.30pm, it doesn’t seem to be very busy, but it sure got a little more crowded later on in the evening. Immediately after entering, there are some amazing furnitures on offer, right at the entrance. Although I do not think that anyone would want to seat here since there are definitely more private options on offer. There are a lot of different seating area and I shall let the pictures do the talking. 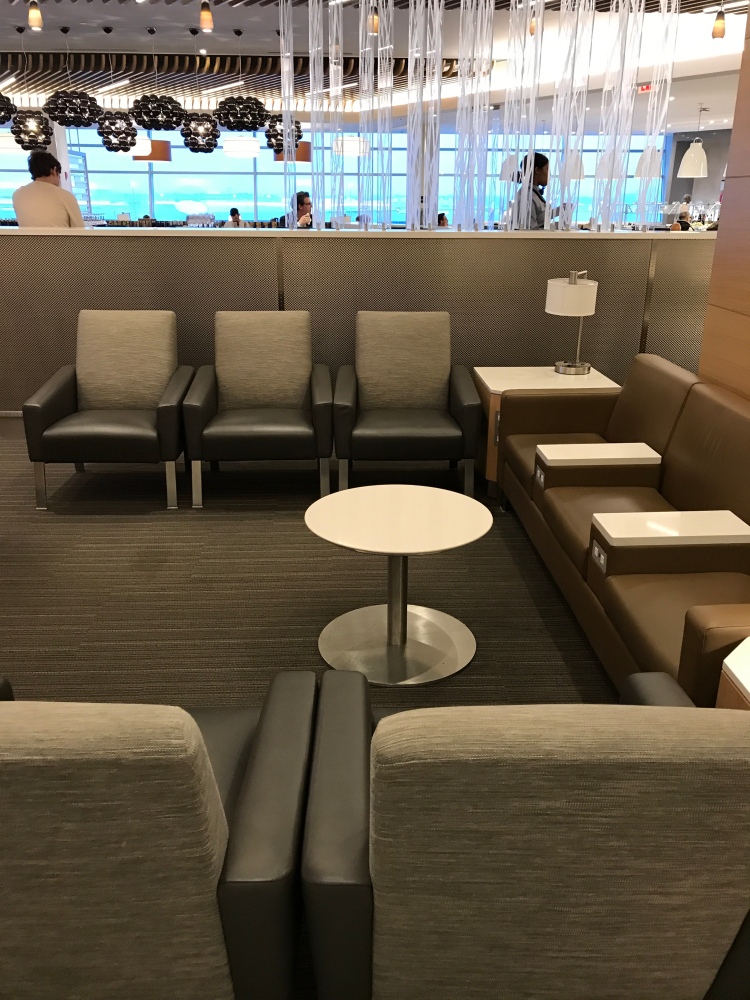 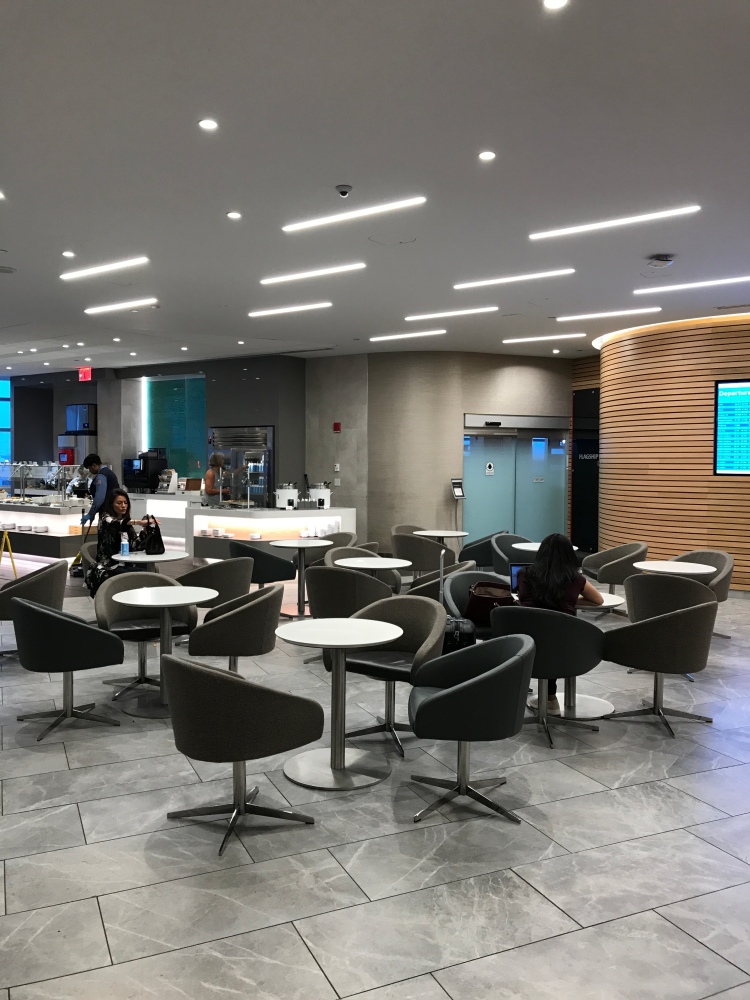 I love that the lounge has a lot of natural lights and the view of the tarmac which is sure lovely. Sadly, it was raining when I was here which did not show the true beauty of the lounge. The main refreshment area or buffet line is near the window area. I love that they had another drinks area as well as the gorgeous self-served bar which alleviate the crowd near the buffet line. There are a lot of food on offer, from salads, cold cuts, soup to hot mains. All of them look fresh and delicious.

While there is no manned bar in the lounge, right in the centre of the space there is a wine bar which is definitely the highlight. It was a gorgeous display of champagne and wine on offer. AA is currently serving up Besserat de Bellefon which goes for around 70 a bottle. Earlier I heard that when it first open they were even serving up Bollinger. It is really nice. 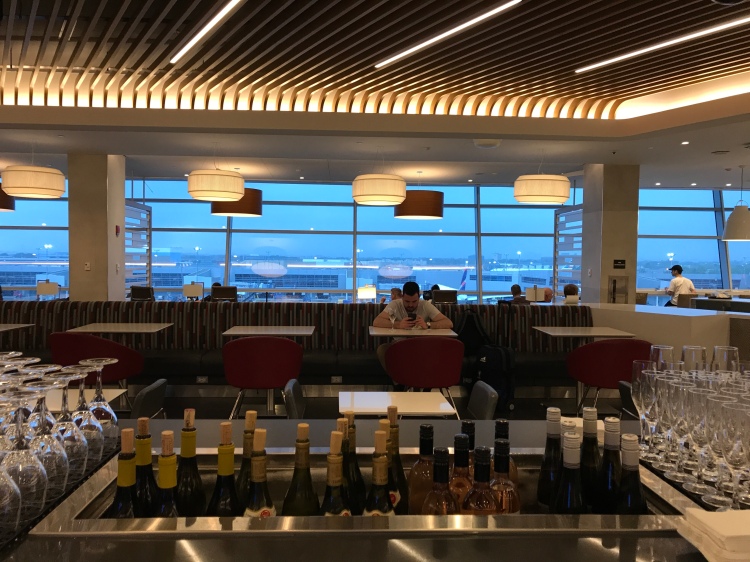 The lounge also had multiple attendant going around and clearing up. Overall it look really neat and nice. I am pretty impressed. Staff were generally nice and polite although I could not speak much since I spend the most of my time in Flagship First Dining. Wifi was fast and require a password, which can be found throughout the place. I am glad that I got here when it is a little more quiet to get so many pictures 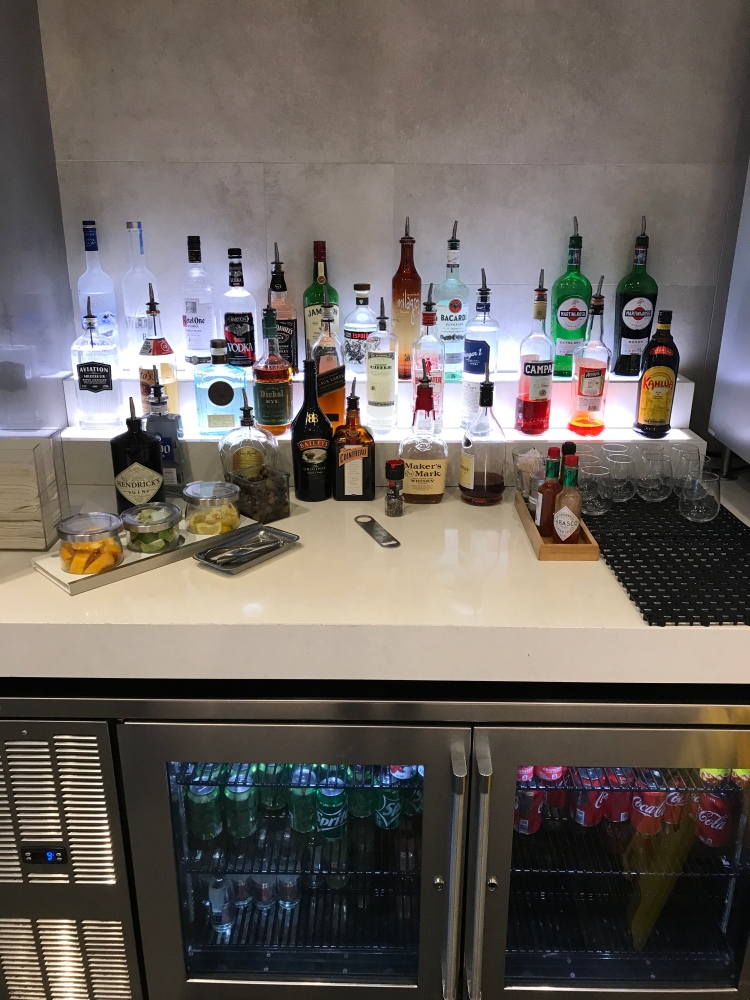 There is also a quiet room and luggage storage area which is located near the entrance. Which is a sweet thought for passengers.

The washroom are fairy fresh and clean. I also had a chance to use the showers since I wanna get one before flying for almost 20 hours. The showers are located in a separate area in individual cubicles. They are not too bad. Decent enough and really spacious. C.O. Bigelow toiletries were also provided. However that comes to an end to the good point on the showers. The water pressure was pure disgusting and I had such a bad experience it felt like there is water rationing going on. Or they didn’t pay their bills. The water pressure is so lousy that I felt like I am showering from a broken, leaking pipe. AA you really got to do something about this. 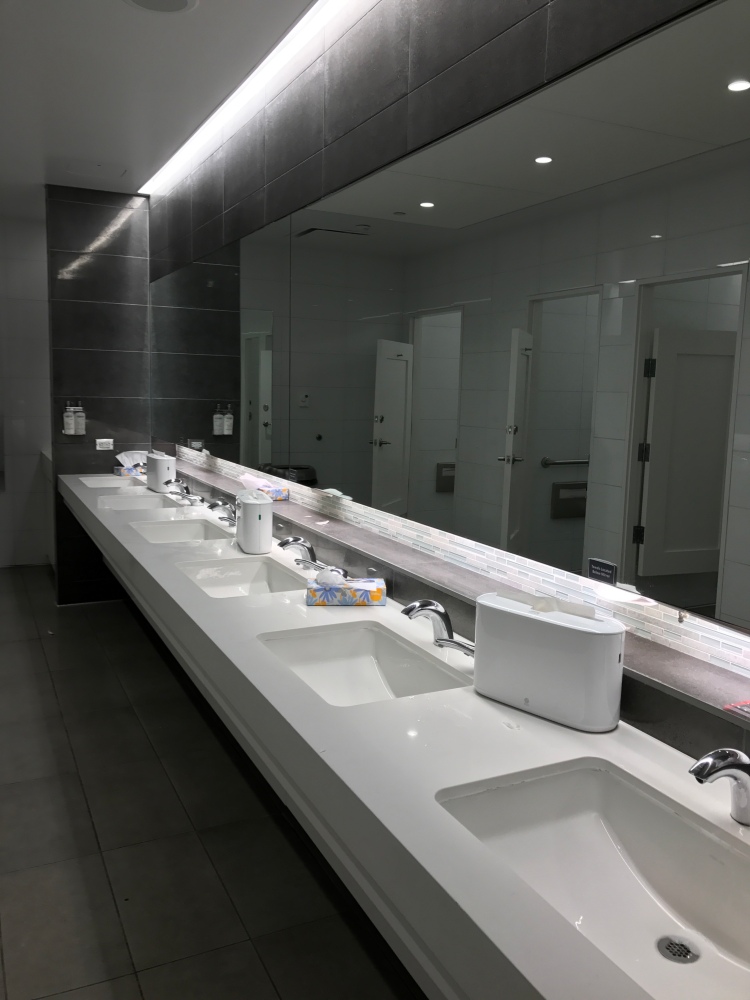 Flagship Bridge, this is refurbished from a Admirals Club in the past, but absorbed to expand the Flagship Lounge due to crowding issue since they are frequently packed. I would actually recommend this place than the main area. Although it is not as lovely as the main lounge since it opens up to the terminal. It is much quieter and is a good alternative. There is even a made to order menu that sound really awesome for Business Class passenger.

Here is the menu on offer! There is also a buffet area here, although it is rather watered down. But definitely the made to order menu made up for all of it. Although I did not try any of it. The kitchen is the same as Flagship First Dining, as such it must be pretty awesome as well. 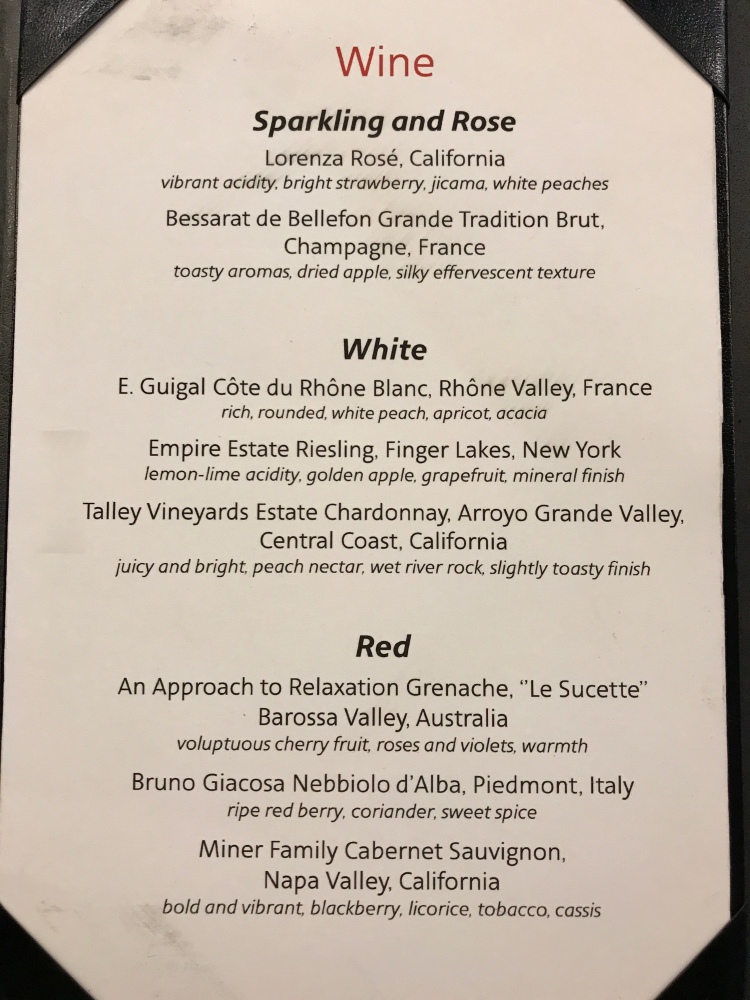 This area also had different areas, business centre and even a Kids room. 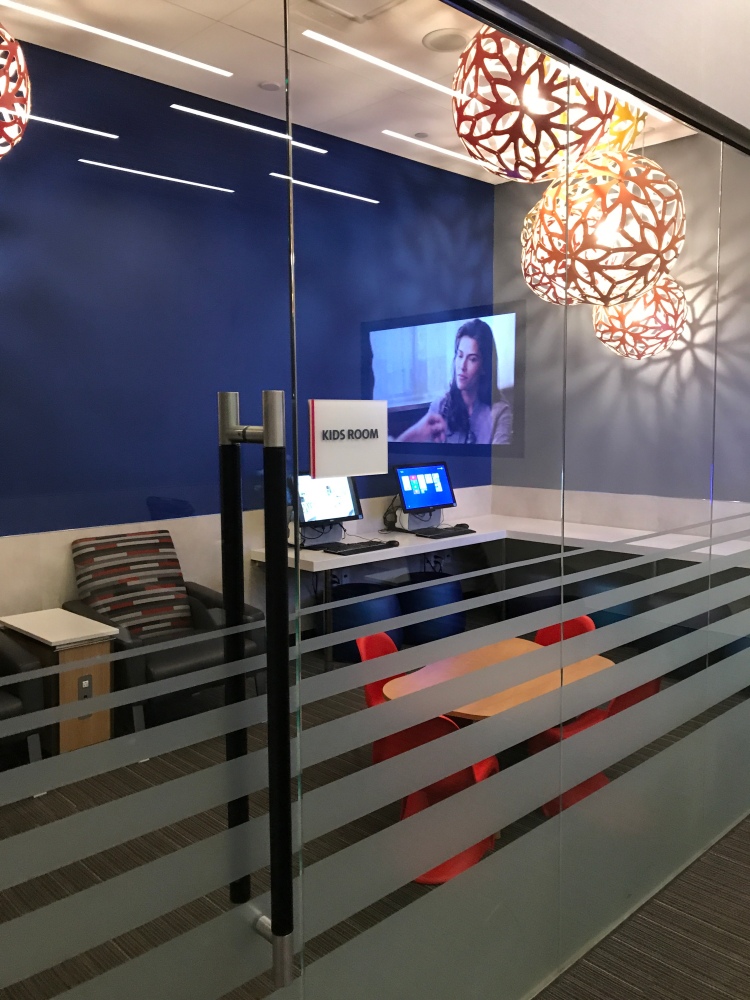 This is definitely one of the best lounge that I have been to. AA sure didn’t lose face on their Flagship products. it is such a step up from the usual admirals club. If you have access and are flying out from JFK, you really got to come early and enjoy the lounge. I think it might be even better than my usual SQ SilverKris Lounge and this speaks a lot. Next up, I will be sharing on Flagship First Dining. I have decide to do up a separate post since it is a dedicated facility and it is divine!