Finally getting the time down to “pen” down this entry after such a long time. It is probably the right time to do so since I have been forgetting stuff so easily these days and my memories of the lounge is getting more and more vague. Sometimes I do ask myself whether I should quickly finish jotting down my trip experience or just continue as it is now. Some of my friends have also laughed at me for taking so long and actually writing a trip that was last year! Back to this post, the last part in this non stop eating and sleeping Sawadikap trip series. On the lounge offering in Suvarnabhumi Airport, the international airport of Bangkok, for the Priority Pass, you do get access to the Oman Air First & Business Class Lounge. In terms of offering and free entry simply by being a Priority Pass member which is easily attainable by most credit cards, the lounge is a good one. Especially when you are offered to the same product that is used by Oman Air premium passengers. While I will touch on the experiences later, the lounge is located in Concourse E , Level 3 on the West Side. A side note to keep in mind, the Suvarnabhumi Airport is a huge one and if your flight is not departing on the same side do cater necessary walking time. 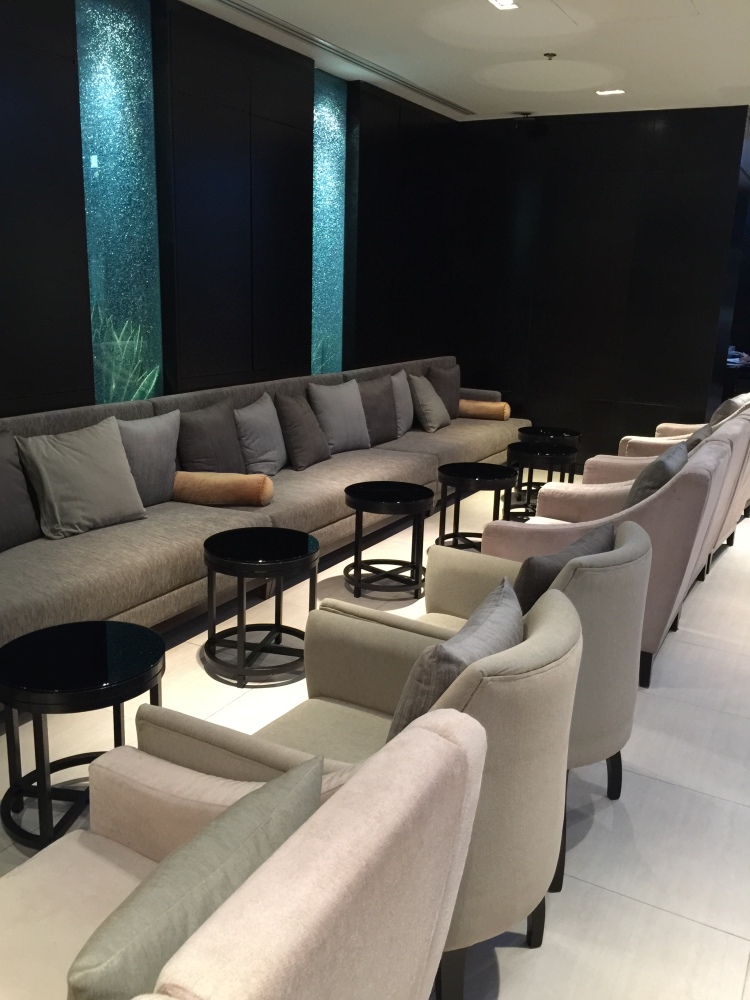 Despite having pre researched where the lounge is, it is still one tough nut to be found, especially since the lounge isn’t indicated in any of the signs at the airport when the other lounge can be found. THIS IS SOMETHING THE AIRPORT COULD IMPROVE ON. Furthermore after my super regretful, ass hurting taxi ride from the city that took me close to one and a half hour and the security checks, all I wanted was a nice little rest in the lounge with a drink. Keep in mind guys, never take the taxi to the airport in Bangkok. Even with the stairs at the train station, take it. We entered the lounge after presenting our priority pass card, there was a couple of people in front of us. The lounge was slightly packed since there is a Oman Air that is due to depart soon. Do take note that the Lounge close early at 8.30pm slightly after the last Oman Air flight have departed. Nothing to blame on the early closing time since it is impressive enough that they open a lounge simply for their couple of flights. The first impression was a tat disappointing since the receptionist had a long black face, it was even worse after the fact that we told her that we were entering using the Priority Pass program. This was damn deterring, after all the one main reason that they were taking in Priority Pass passengers is to help with the cause since they do get paid for every passenger that enter the lounge. Perhaps the fact that she had a long day and it was close to their closing helped with the long face.

The lounge was nice and cosy, it can’t be said to be huge, but definitely sufficient enough. It was separated into two main halls, one containing the main buffet line, business centre and also the toilets. While the other feels like an extension that provide more siting space. What really impresses me in the lounge is the availability of small drinks set up like coffee machines and tea to allow passengers to top up their drinks instead of walking all the way back to the main buffet point. The lounge were in the airline signature blue colour and actually it look pretty good. Passengers were mainly arabs and some westerners. The lounge really cleared up after the last Oman Air flight were due to depart, which makes it perfect to grab some great pictures. 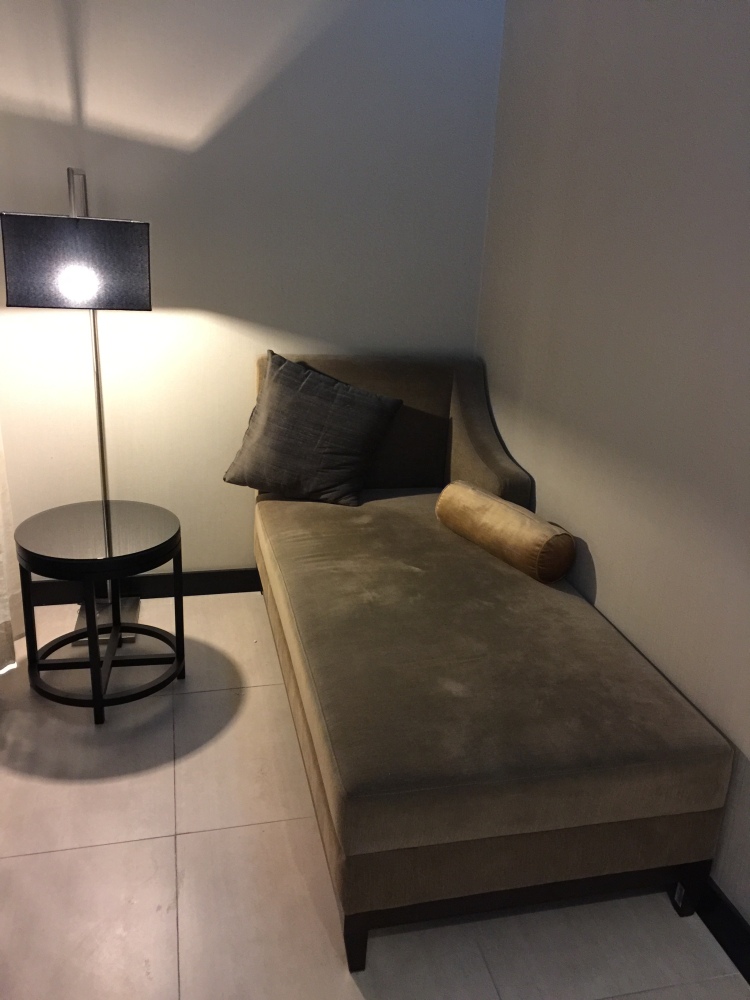 The lounge had the typical lounge chairs in groups as well as long sofa seats along the wall. It really increases the amount of seating while not making it appears to be cramp. Let me first share on the extension hall. Here there is a  long sofa seats along the exterior of the lounge while the rest of it consists of the typical chairs. Then at the far end of the lounge, there is a tiny space that is being curtained off, inside it consists of two long sofa chairs that is being used as a day bed. While i find it pretty cool and definitely a plus point for a Priority Pass lounge, on second thoughts it feels a little weird to be taking a nap here and also the thoughts of thinking actually how many people have slept and drool on it was actually a little detering. The two daybeds also faces each other directly. Making it pretty awkward. 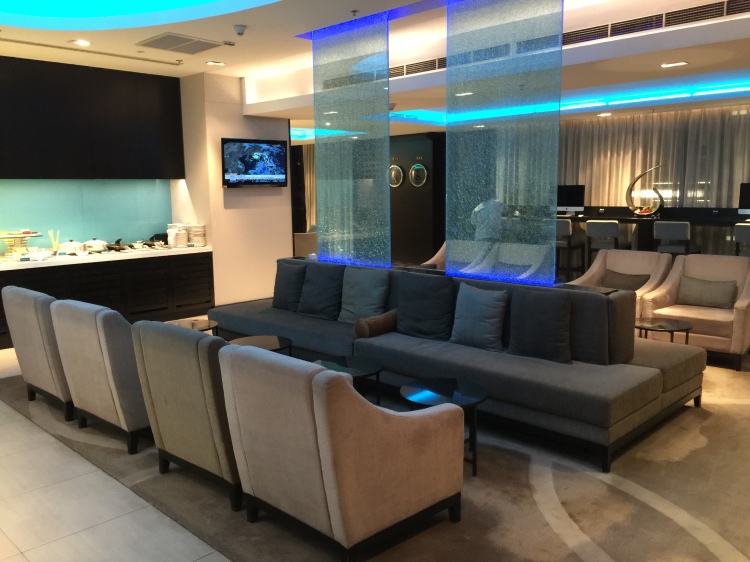 Then to the main hall of the lounge, here it is also the place where the main drinks and buffet line it. I will first touch on the seats. Seating availability here is a little less, there was the usual long sofa along the wall and then a sort of blue glass display in the middle of the room and then some seats surrounding it. The display is actually pretty cool. Then at the far end was the business centre, it was located on the table top with two huge mac computers on it. While the offering was really of high quality with mac computers, I feel the need for more privacy especifically if you are doing some business stuff on the computers. This was, what you are working on will definitely be seen by others in the lounge. Around the corner from the computers are the toilet. While there are only two of them, they were individual toilets which was well maintained by an attendant who is always position outside the toilet and ready to tidy up for the next guest. This is really appreciated and furthermore, the toilet attendant had far more hospitality than the receptionist at the front. If anything, she deserve more complements.

The refreshments were pretty good, with a couple of hot dishes and even desserts and cheese. Although the food are mainly arabic influenced and may not be everyone taste. The drinks selection then is the one that I found really impressive for the lounge. Beside arabic coffee, they have nespresso coffee with a huge selection of capsules then the fridge has cans of soft drinks, beers and water. The self serve bar also have a great selection and then for a Priority Pass Lounge it is really good, with spirits like Double Black, Bombay Sapphire, VSOP, Chivas. They even have Chandon sparkling wine to be served. I have seen way many other lounge that offers lower quality selection then them.

Overall I felt that this was the best lounge in terms of Priority Lounge offering in Bangkok. The place is great for a rest while waiting for your flight and a couple drinks while waiting will certainly not hurt. The service that I encountered might just be an one off thing or just that particular staff. With this, I shall wrap up this Sawadikap trip series. I hope you guys has some great recommendation for your upcoming trip. The next trip might take a while to come, but it will definitely be worth it since I will be heading to many dreamy European cities as well as the states. DO STAY TUNED!