Probably many of you Singaporeans would have already know this place since it is like a meeting spot for the Singaporeans over there in Bangkok, Thailand. Located near Platinum Fashion Mall and the Pratunam Market, it is a popular spot for lunch and a late breakfast. Perhaps they are the reason that is why this place is so popular among us, after all nothing is better than some hearty Wanton Noodles and Braised Pork Trotter to accompany the resting of legs after shopping through the large unfinishable among of stalls and sellers. It is located directly down the alley across the Platinum Fashion Mall. You will probably see the sign showing you and then saying that there is only one branch in Bangkok and especially none in Singapore!!! It is open from 9am till 3pm in the afternoon but you should probably not head there just before closing since the Braised Pork Trotter do get sold out pretty fast. 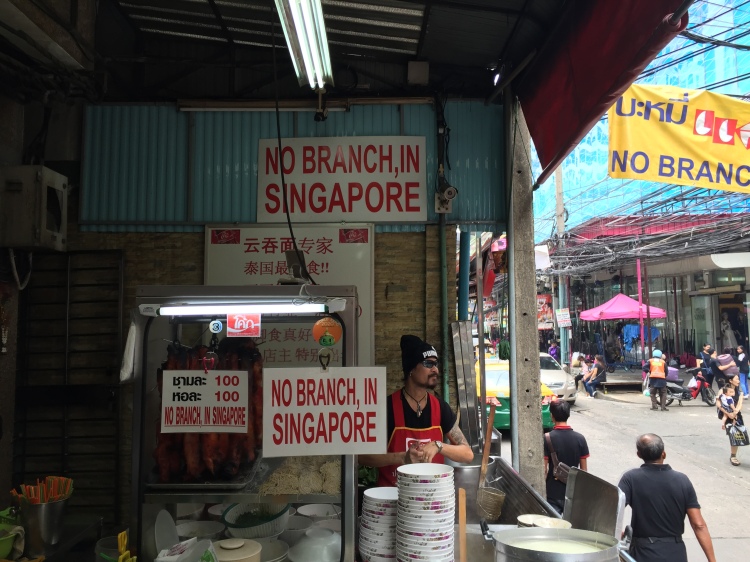 The place is no fills. Not much decoration but better than the roadside stalls since they do get better environment and water for the food preparation. It is located up a couple stairs and the entrance to the eatery itself is the cooking place for Sabx2. On the right hand ride you get great view of the local thai cook tossing noodles right in the air and a table full full of condiments and ingredients alongside the stove of boiling water. On the opposite side, there is a cook chopping up the braised pork trotter and someone else doing up the beverages. The interior was pack, thankfully it was air conditioned given the hot and humid Bangkok weather all year around. Bustling conversation going on, waiter serving up bowls and bowls of noodles and plates of rice. There was no rest. The place was full when I was there at 1pm. We promptly order 3 bowls of the noodles and also a plate of the Pork Trotter Rice along with one of their popular chrysanthemum drink. The staff here mostly could understand much except number of bowls and plates of rice.

I keep myself entertained while waiting for the food to arrive with the constant hearing of recognizable phrases and sentences from my fellow countryman. As per mentioned this place somehow is popular more with Singaporeans rather than the locals. There are a couple other tourists too. In fact what was even humourous was the constant sighting of numerous signs in the eatery that keep saying that they have no stores in Singapore! The food came after a short wait and the first impression was that they really had huge bowls. They were those large and heavy ceramic kind. Which I really think that they were really taking up a lot of spaces since the places are that small they aren’t really practically. Furthermore, the portion of the noodles in the bowl is really little!!! It is literally finishable in like three mouthful! Even a petite girl could polished off three bowls with no effort. But, but, the noodles were divine, absolutely delicious, fragrant, oily with a bite to the noodles. They were the dry kind of Wanton Noodles. Seasoned with lard, which is the main reason why the noodles were so nice. Each bowl came with a couple of wanton,some crabmeat and a decent amount of charsiew. They also came with some vegetables and lastly topped with the crackling lard. While the char siew was average and the crabmeat seems more like an attempt to elevate the dish. They were really delightful, just that the portion was too little.

Then we also had the Pork Trotter Rice, this time around it came in a flower plate with the pork trotter plated on top of the steamed white rice. On the side was also some sour salted vegetables. While the gravy were an absolute gem and a great pair with the rice, the pork trotter that came were all the skin and fats. It seems like they have run out of the meat and just sold us still. This was really a disappointment since there was like really not a piece of meat at all. Simply unbelievable. The chrysanthemum drink were strong and flavourful but as the thai always do it, overly sweet! They were also super yellow, almost look like it was with colouring but thankfully it taste homemade and fresh. Certainly not for the faint hearted.

While the noodles were great the rice was a disappointment. Every dish cost 100BHT which was 4 bucks in Sing, for that portion it was certainly over priced. I also feel that the place was super materialistic, things were over priced and they charge for everything. The portion was not worth for 100BHT and the rice was a scam, even the extra crackling that we ask for was charged at 50BHT. The only decent charges were the 30BHT Chrysanthemum drink. While paying for good food is fine by my standards, getting scam for the rice were certainly not acceptable.

Were you guys ever here? Let me know how you guys think? I hope that you peeps like the Wanton Noodles though! They were really great! Right after this I will be writing about another popular spot in Bangkok, After You Dessert & Cafe!