On the previous episode, I mentioned that I was in Fitzroy for Lunch. Cutler & Co is one of the recommended restaurant to be in Melbourne. Located in Fitzroy, this award wining restaurant is as hype up as it’s surroundings. Chef Andrew McConnell helm this upscale Australian fine dining restaurant. The venue is in a gorgeous restored metal works factory. Placed in the nation’s top ten restaurants at the Gourmet Traveller 2014 Awards the interior is well finished with wood, steel top and high ceilings. It feels sleek, cool and stunning. It is also worth pointing out that the location is highly accessible.

After a little research, I knew that I gotta be here to try them out and I definitely wasn’t wrong! Upscale, fine dining but in a relax and comfortable ambience. It certainly isn’t a full formal all on establishment! Just smart casual would do. The streets and neighbourhood were quiet and quaint, seemingly without any traffic on a Sunday afternoon. However when we enter the restaurant it was a entire different story, certainly bustling was the word to use. People are having lunch and chef are working the pans off. It is great to see a mixture of crowd with Asians too. Seemingly the most ordered the dry aged 1.1kg angus rib-eye which seems like their specialities. I was immediately attended to by a host and shown to my seat, jacket was taken and still water was provided. The interior was amazing as mentioned, although packed, the restaurant was pretty huge. It practise an open kitchen concept with a little bar counter tables on the chef working station. The
rest consists of normal round and rectangle tables around the room. I was seated at one of the rectangle tables along the wall. It also had a great bar. 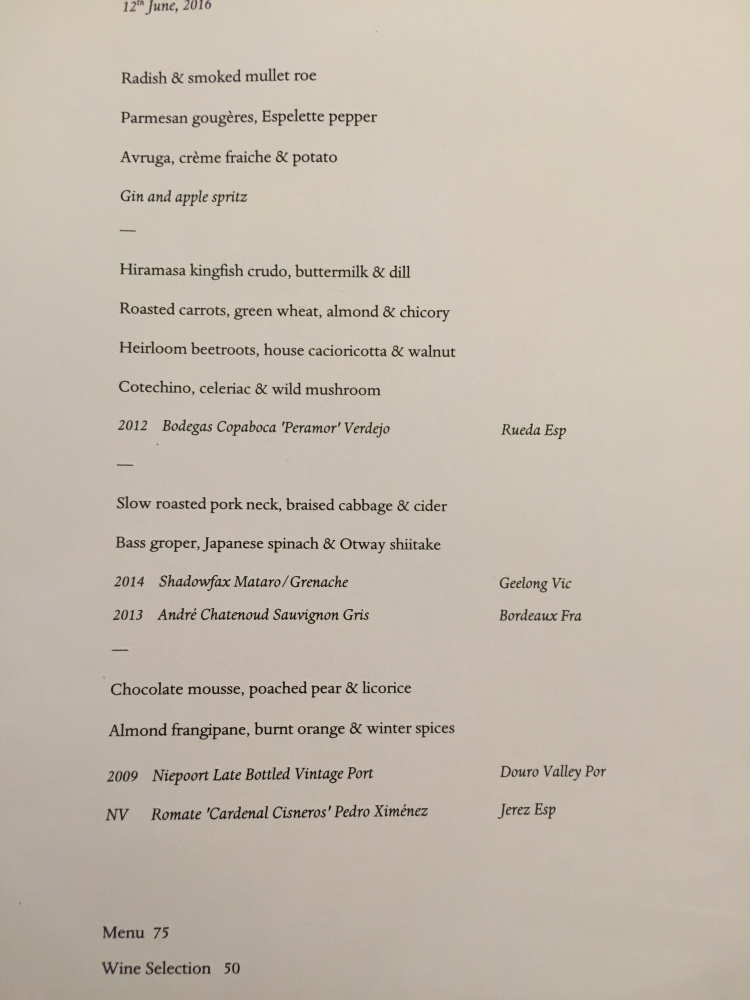 Cutler & Co has many options available, alongside the alacarte menu it also has it’s market lunch on weekdays and on Sunday, it has a comprehensive set menu for lunch. This is my recommendation! Especially if you are here for the first time, it allows you to try out many dishes and have a feel of their cooking. It felt just like a mini degustation meal with 10 courses! The menu also changes every week! Above is a picture of mine! You share 3 starters and 4 appetisers with the table, then you choose your main course and your dessert, lastly the meal end with some petit four. The lunch cost 75AUD and includes cover charges too, alcohol pairing was 50AUD. The service was good, but sometime sluggish and slow. Slow is actually fine by me since fine dining is usually an experience and intended for you to slow the pace down, enjoying to the fullest! The toilet is also clean and stocked with Aesop products. My whole late lunch too about 2 and a half hours and I would share about the courses with you people. 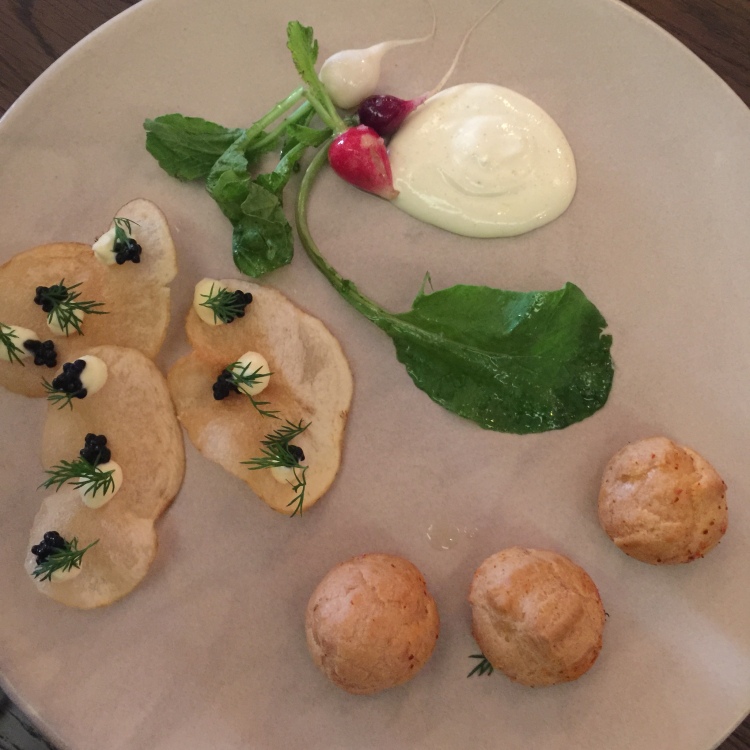 Upon settling on the menu focaccia and a sesame bread with brought along with homemade butter. First came the starters which were Radish and Smoked Mullet Roe which seems more like a cute little baby with mullet roe sauce. It was certainly fresh and new to me, except for the crunch, I find it okay only. Next is the Avruga caviar with creme fraiche on potato chips. I really like how the caviar briny taste complements with the extremeness and the crisp of the chips. Pretty good. The third starter was also mine favourite one as it is really flavourful and such a delight. It is Parmesan Gougeres and dusted with pepper powder. The choux is really airy, light and every bite came packed with parmesan. I could just pop so many of those on snacking! 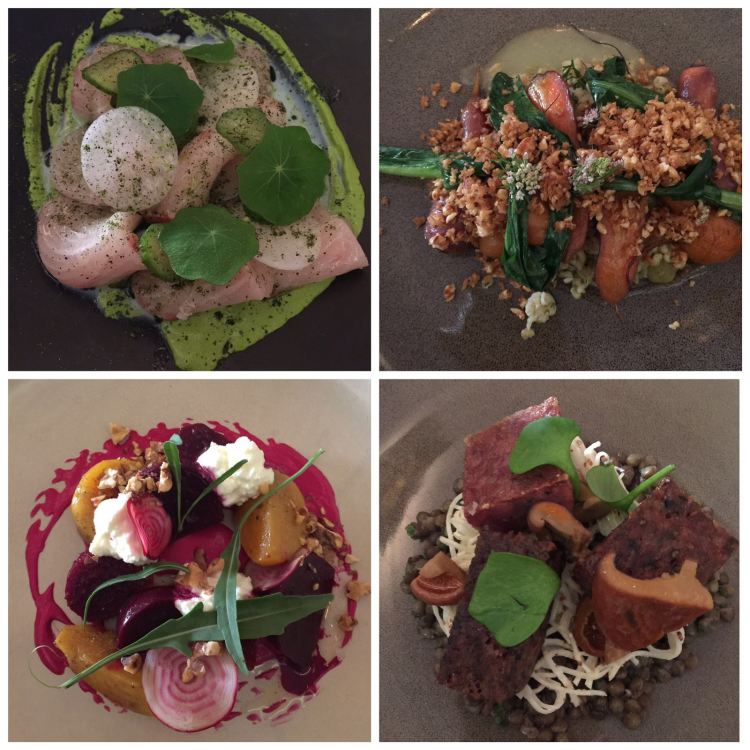 Subsequently it was the appetisers. It consist of 4 sharing plates, intended to be served as a whole. The portion is really sufficient and to be frank, I was pretty full after the appetisers! The first dish, which is also my favourite one was the Hiramasa Kingfish Crudo with Buttermilk and Dill marinate. This is devish! It was my first time having kingfish sashimi and given that I don’t really take fresh fish, the buttermilk and dill sauce really provide the perfect complement to the thick slices of fresh fish. It is just really fresh and refreshing. Dayum taste of the ocean! The next course was another favourite of mine! Roasted Carrot, Green Wheat, Almonds & Chicory. A little of asia meet the west, the cute baby carrots are simply grilled and the match with some kailan. However, the star of this dish and the soul was the crispy combi of wheat, almonds and chicory together with garlic the bits was so flavourful that it brought the dish to another level. Something funny happen during this course as a strand of hair was found on my mum plate after the change of plates, we simply pointed it out and they change a fresh one for us without any comment. I don’t like the last two appetisers that was on the menus. The beetroot just didn’t suit me, too raw for my liking. However if you are a well taker of raw crunchy vegs, you will probably love it. The last dish of Cotechino sausages flavour is just too strong for me that it smells weird to me. 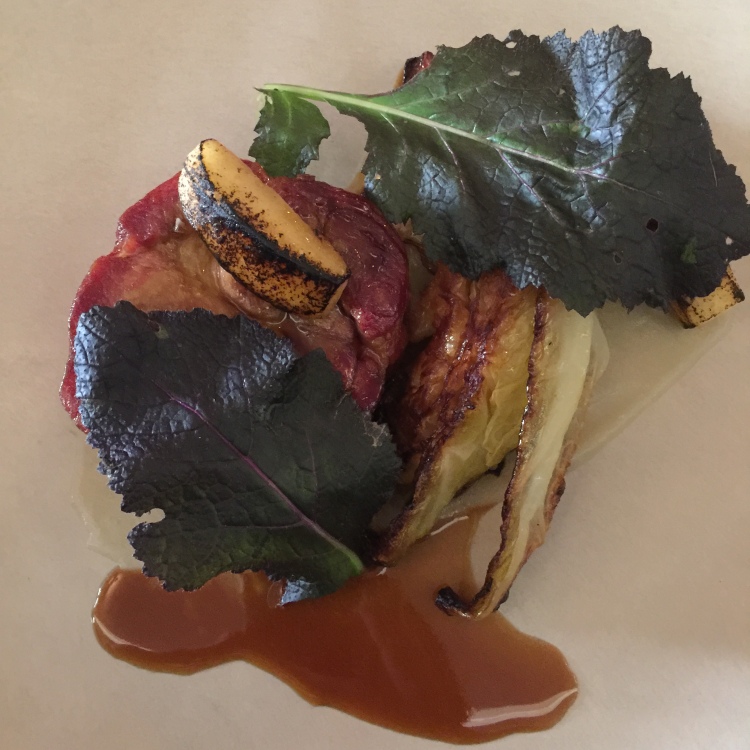 I had chosen the Slow Roasted Pork Neck with braised cabbage and cider and it is nothing but fabulous. The pork was well seasoned and flavoured. The use of cider was so great and goes well with the pork. I like it that the pork had a chew to it and the slightly burnt crunchy cabbage added some crunch and texture.

I also had a bite of the Bass Grouper with Japanese Spinach and Otaway Shitake. The fish is tender and flaky. The chef also handle the fish well, with nice crispy skin on it. However, the portion might be a little small but everything was fine given the amount of courses before this!

Lastly was dessert, we opt for different choices to try them all out. Both the Chocolate Mousse with poached pear and the Almond Frangipane with Burn Orange taste well. However I had a slightly preference for the chocolate mousse as the poachesd pear was really well. Sweet, tender and sup[er delicious with the chocolate mouse which is on the bitter side. Suddenly, at this point in time, the staff brought out another dessert, with complements from the chef. It was a chocolate frozen cream cake crusted with nuts before being topped with a scoop of ice cream. This turn out to be the best dessert of the meal. Given the situation, I would have suspect that this is due to the hair that we have found on the plate earlier.

Cheese was an additional option but we were definitely too full for it. Petit fours was brought out to complete the meal. Overall the experience was very well! Super affordable Sunday lunch! And the service was up to par for a restaurant of their calibre, the staff were polished and takes the effort to explain each dish to us. The hair was an isolate situation and the staff managed to somehow salvage it. Really a great place to bring my friend or to come again. The ambience and changing menus are the advantages of this place.