Speaking about the cuisine in Prague, I hate actually find it better than countries such as Germany or Turkey, perhaps it might be my own preference or a Singapore taste. I find that the food in Prague have more mixture and have a greater variety, although there are no specific line of cooking. It really isn’t really distinctive or famous like the Italian or French which are known worldwide. I would actually be able to survive well in Prague without being too sick of the food. You are able to find many different types of cuisine in Prague that will definitely cater to anyone, there are the local food, Italian, Spanish, French, Chinese, you name it and you should not have a big issue in finding it. Here is one of my favourite in Prague! 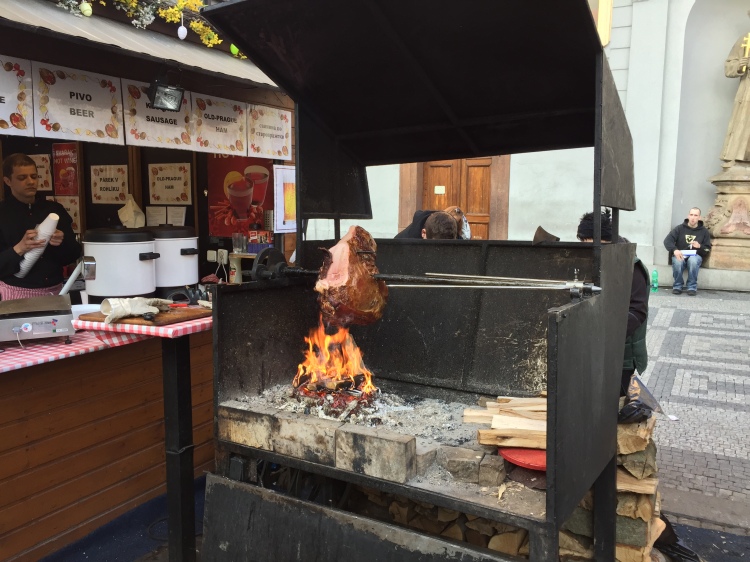 On a slight note about average expenditure in Prague, it is actually pretty affordable to us, Singaporeans maybe, prices are definitely lower than the main European destination and especially so much cheaper than Paris, London and obviously Swiss. The currency to be use is actually called Czech Koruna, despite being part of the European Union, Czech Republic doesn’t adopt in using the Euros, this may deters travellers since the Euros is such a useful pull when travelling around in Europe. Perks of travelling in a custom union, hey see, seems that my IB education is still in my brain. On the good sides, this means that the prices are lower over there and we have more spending power, perhaps to the majority of us. The disadvantage was obviously inconvenience, since the Czech currency is hard to get overseas even though in Europe, you may not get it widely. For Singaporeans, I believe that the only way is to change in Europe or maybe even in Prague itself, this means bringing more of the Euros, Pounds or US Dollar to change over there. It is important to note that most currency exchange charge a commission. Euros are also excepted at most established stores. 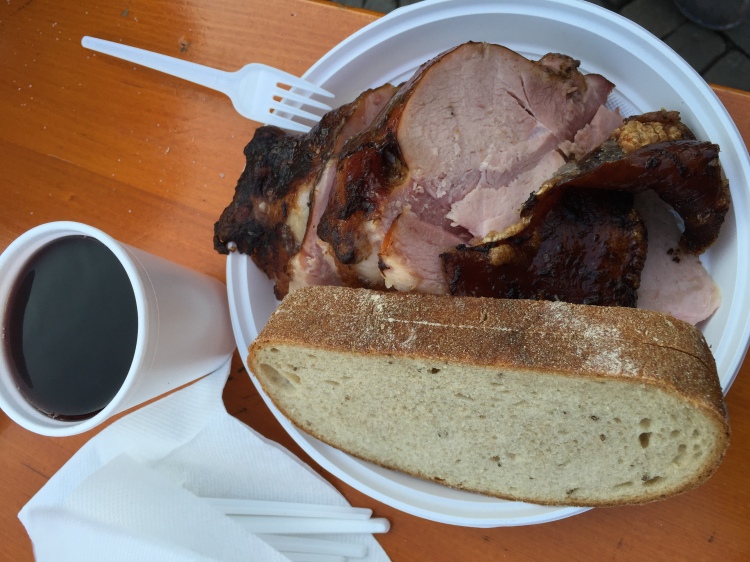 The most expensive meal that I ever paid was actually for a flame roasted ham at one of the Easter Market, it was around 800 CZK, which was around 30 SGD averagely, it was a huge chunk of meat slab along with pieces of bread, along with some hot mulled wine, it was a perfect first meal in Prague. There is no greater enjoyment than standing in a Easter market, putting tender roasted ham in your mouth and flushing them down with the hot wine. With the cold breeze flowing but definitely feeling warm inside the body. Hey, to note, I only wore a leather jacket in 8 degrees. This is an experience not to be missed. Another frequent item seen at the Markets was the cinnamon toasted bread thingy, sorry for not knowing the actual name, hey readers I would really appreciate it if you could let me know. This was really nice and special and it smells so great, they actually roll the dough around a metal rod and then cook it over a flame or by electrical hot rods, the ones that are cooked with charcoal are the best actually. Authentic as it is. Then as and when, throughout the cooking process, the chef will coat it with sugar and cinnamon repeatedly. It is really great, costing about 20 CZK, you could pay a little extra for some nutella spread also. Although I prefer it as it is, served hot, you could get the cinnamon fragrance and also the crisp of the browned sugar, the charcoal definitely elevates its status and lastly the soft sweetness bread inside. This is definitely my favourite street food in Prague, perfect as dessert or as a snack, eating on the go. Some other food you may find at the markets includes friend pizza, Potato Chips, Sausages and Potato pancakes. Europeans can really cook their potato well, the pancakes were delicious, tender and full of flavour, perfect with the sauerkraut or the sour cream on the side. 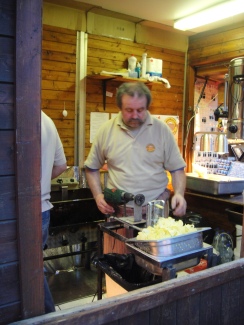 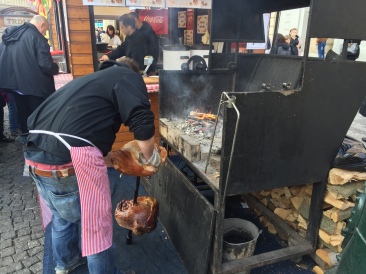 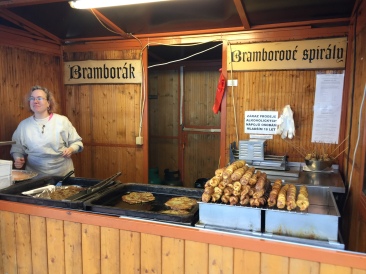 The most common found beer in Prague is the Pilsner Urguell and the price is awfully cheap, I could get a bottle for around 1SGD at a supermarket. The beer taste strong and powerful, with a hint of bitterness, the hops is really overpowering. I don’t really like it, but definitely a good experience to taste it.

As said, my mum was actually quite sick of the potatoes, pork, bread and European food stuff, I actually really like it. Therefore, Prague was the place where we had the most internationalise cuisine ever, the first night there we were in Prague, we went to this great Thai Bistro, the food was nice and to my delight, quite authentic actually and the Tom Yum soup taste great, theirs was the milky version and not the clear one but it just taste so good to have something hot and spicy after all those heavy starchy potato meaty dishes. The restaurant name is called Zebra Express, so much for Thai right, shouldn’t it be called Elephant Express? Things were cheap though, with the whole meal costing less than 30 SGD for a couple beers, fried noodles, Thai basil minced meat rice and the Tom Yum Soup.
Another Asian restaurant that I visit frequently was MyWok, located near the Kings Court Hotel, this was superb, definitely out of this world. Much cheaper though. It was my cheapest meal in Europe, with noodles or rice costing only around 5 SGD, hey Raffles Place prices. It was nice, full of ingredients and the sauce was great. It’s menu was simple and allows for plenty of flexibility too. First, you choose your base, ranging from egg noodles to rice and udon, there are healthy option also like whole grain rice and wheat noodles. Simple as it is and you can mix and match. I would recommend getting the Chicken, Pork or Prawns to complement, salmon was great too. Then you will get to choose a sauce that to be used during cooking, I will recommend the spicy ones. MyWok is good for takeout also, fast and cheap, pack in a nicely cute square paper box that you will feast to once you reach your hotel room. Everyday there are also a few set menus that are slightly cheaper, with a pre-set combination for around 80 CZK. 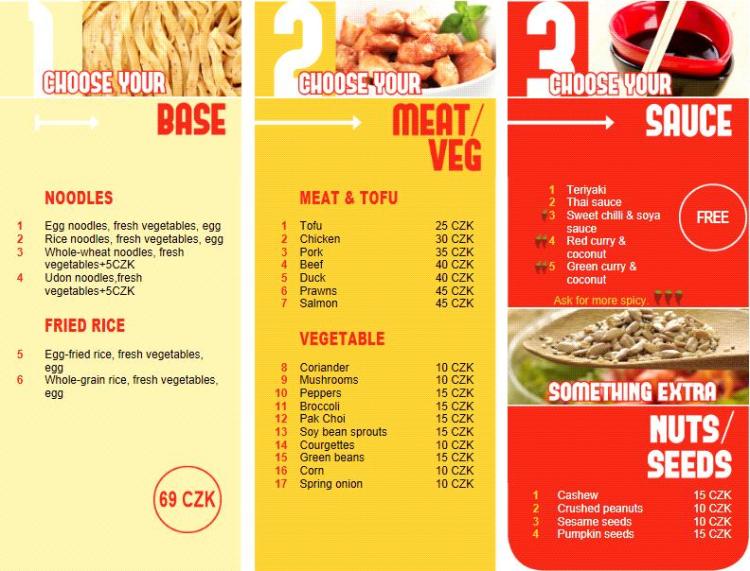 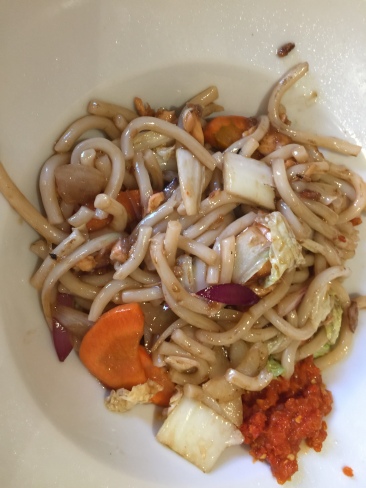 Another gem that I had found by change was Bageterie Boulevard, I shall name it as the  Blue cheese sandwich shop! There was a slight rain passing by and in I went to the shop, with free wifi and a shelter with table and chairs, things can’t get any better. A little side note, Bageterie Boulevard is a Czech fast food chain, selling mainly baguette style sandwiches and some sides. It is consider to be a fusion between America and Czech I guess? Prices are a little expensive actually, around 9 SGD for a meal which is slightly above subway prices. However the ingredients and menu is so much better than Subway, hey for a start they have Blue Cheese, oh I am craving for that gluey combination of the Cheese and the sauce. Their menu change slightly time to time and they have bacons, chicken, beef and from Brie to Blue Cheese! How great is that! Do check out their menu at the website, http://en.bb.cz/. I had the Brussels, which consists of roasted chicken, blue cheese, mayo and roasted onion. I swear, with the “stinky” cheese plus the creamy mayo top it off with the sweetness of the onion, C’est La Vie, when you bite into that crunchy crispy baguette. I am looking forward to trying the Paris and Catalan Subs soon. To go along in the meal I had opt for the broccoli soup, although a little salty side, but it was super hot and tasty, perfect for the cold weather. Every day, the soup changes too or if you would like to have the Patata Bravas for your side dish. Nothing else is better than biting into that crispy bread and using your phone, perks of having free wifi. 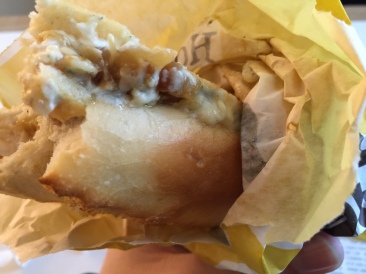 On the day that I was walking towards the Charles Bridge, we decided to get some food and also rest our leg at the same time, human nature also calls. For those who are unaware, clean and free toilets are a gem in Europe, you really need some tricks unless you can choose to pay 1 Euros for your peeing visit. Walking pass this restaurant was just right, at the right place at the right time. We choose to sit outside at one of the covered “tents” this is super good for human watching, the weather was cold but inside the temperatures are regulated by some fire lamps. The restaurant was located in Hotel U Zlateho Stromu, actually it is located almost directly opposite the Charles Bridge in one of the alley. We ordered 2 fish dishes, no pork man. Prices were definitely on the affordable side, around 10 SGD per dish., it is really relaxing sitting down here, perfect for reading a book while sipping coffee, couldn’t hurt to stare at those beautiful buildings too. Although, how can I miss having an ice cream while exploring the Charles Bridge! 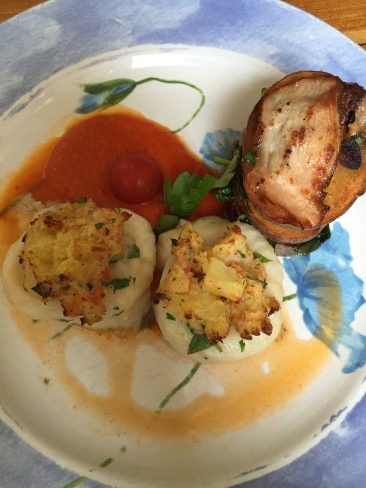 Before I forget, I am actually super interested in Mcdonalds when I am overseas, it is so interesting to see the prices and also the menus, in different countries the menu change slightly, with the adoption of local cultures and favourites. For example, in Germany you can get beer, WHAT ABOUT AN UPSIZE? In Hong Kong you can get a pork patty, pretty interesting for Singapore fans right. Then there is the price, there it is the Mac famous Big Mac Economic Theory where the price of the Big Mac is use to tell the PPP and GDP of the country. Quite true actually I think, since the Big Mac is a common commodity, if I am not wrong, it is the only burger that is sold in all stores. I have once visited the Mcdonalds in Paris and it is really expensive, costing up to 7-8 Euros easily for a meal, thinking of eating McDonalds to stick to your budget, not a chance! 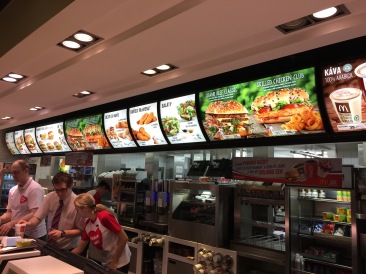 The Easter market is comprehensive too, you could probably spend an hour or so shopping around it, from food to Souvenirs, there is no better place to spend the evening. Looking at those gorgeous handmade Easter eggs just make your eyes go bigger and bigger. Although those eggs aren’t simple, pretty as it gets, it kind of hurt the wallet too, costing around 6 Euros for a simple one easily. I had also gotten a Honey Wine at the Market back, it taste great, warm or cold. Perfect for warming yourself in the winter or having it with dessert. Speaking of the markets in Europe, I can say that they are a piece of art, totally out of this world, which triumph our Singapore Pasar Malam by a couple billions times. Clean and beautiful are just some of the differences. On a last note, I would like to share these gorgeous Easter markets pictures with you guys. Hope you all enjoy and try to experience the atmosphere thru them. 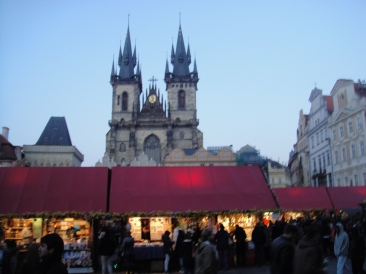 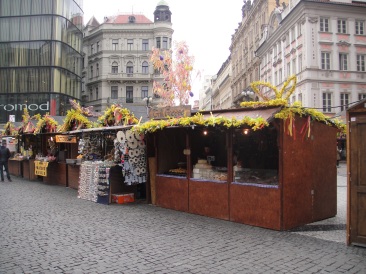