Little did I know how special this flight would come to be! if I had know that it is most likely my last premium flight or flight in 2020, I would have cherish it more, savour it more! It was an impromptu decision, made while I was driving, hopping on an opportunity where Krisflyer was having a one time special sale of 51% off certain awards. It was hilarious as lots of us, including those in the miles and points games thought that it is an error fare or the ticketing system have gone bonkers. Why on earth are award tickets so affordable! I still remember that South Africa destinations were only coming in a around 20 ish thousands. Shrugging off my foolishness of not keeping a sizable stash of miles in my KF account, dragging along my good friend, I could only issue a Bali, Denpasar ticket at 9310 Miles and 49.80 SGD in tax. I was still excited, the thought of being able to try out the new 2018 RJ Business Class seat on SQ which I had miss out previously to Manila for an equivalent of 193 SGD given how I value KF miles, this is exciting. Later on, it turn out to be a special sale since it is Krisflyer 21st anniversary! Oh well! I am currently writing this post while being stuck at home due to the COVID pandemic which has greatly brought travelling to ground zero, this makes this review even more memorable and definitely makes me remise about the fun of flying!

Certain regional flights of Singapore Airlines depart from Terminal 2 and Bali was one of them. However I went to Terminal 3 for breakfast in the lounge since the Silverkris lounge there is much better than the gloomy one in T2. I will not share about that since I have already been there numerous time! Check out my previous post! You can check in at either terminal for all SQ flights and since the sterile transit area is connected, you can access all Terminal 1, 2 and 3! Given that this is my very first time on SQ 787 featuring their latest regional business class I was rather excited and kindly asked the ground agents if I could board a couple minutes earlier since I wanted to get some good clean shots of the cabin! While there are a lot of comments on how narrow or small these seats are in comparison to the usual standards of SQ, do keep in mind that Turkish Air are using these seats for long haul flights. Given that SQ only flies these aircraft on short to medium haul, probably less than 7 hours, it is impressive!

These new seats are a huge upgrade over the previous regional business class. Seats are newer, more classy and most importantly, the improvement in terms of privacy as well as direct aisle access for all seats! Crossing over people legs shouldn’t be the thing in Business Class. Check out my previous post for a comparison with the old regional business class!

The new seats are based on the Stelia ‘Solstys III design and customized for SQ, there are in a staggered form and alternate between true couple seats which are away from the aisle and separated for the middle seats. On the windows sides, they also alternate between closer to the aisle as well as being closer to the window. They are still in a 1-2-1 configuration which means that there will be no awkward crossing over your seatmate legs regardless of which seats you choose. 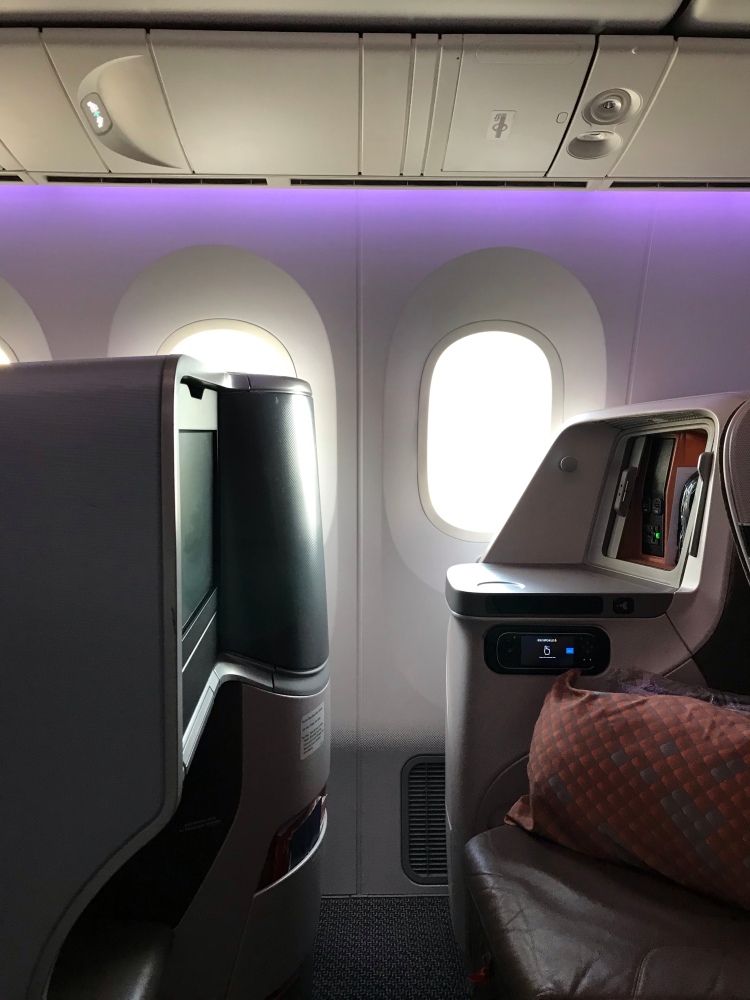 Given that I was with my good friend, we choose the true couple middle seats in the last row. This will allow me to have a good view of the whole business class cabin. The boarding process was smooth and the crew was delightful as per usual on board Singapore Airlines. Drinks and magazines were offered and jackets were hung. I could tell that they were spectacular! Furthermore, I was flying with one of my friend that I made from my previous manila flight! It is a very first time for me to be flying with the same crew ever! It is so nice to see you again Elise.

Being my very first 787 experience, I love how the new planes look and the cabin does look very sleek and chic with the groves of the seat. It is definitely a step up from the old regional seats. This new seats and cabin also provides much more privacy, given that when I am seated, I could not really see anyone else. Even with overhead compartments, it still doesn’t feel tight. Furthermore, this new seats provide much more storage compartments than the previous one where I was struggling to find place to store my stuff.

However the seats are definitely much more narrower than expected and given my size I did have to be careful while entering. Leg space is definitely tighter than what I’m used to on Singapore Airlines. But I do love how deep the ottoman goes which is great for putting your leg up. The new seats also comes with a three point seat belt which is definitely more uncomfortable than the usual normal aircraft seatbelts. Each seats comes with a blanket and a plush quality pillow!

The lighting controls are located to the side of the seats, near your head rest position which makes it easy to reach, especially when in fully flat mode in the middle of the night. Do note that these planes are sometimes used on red eye flights to destinations such as Seoul. 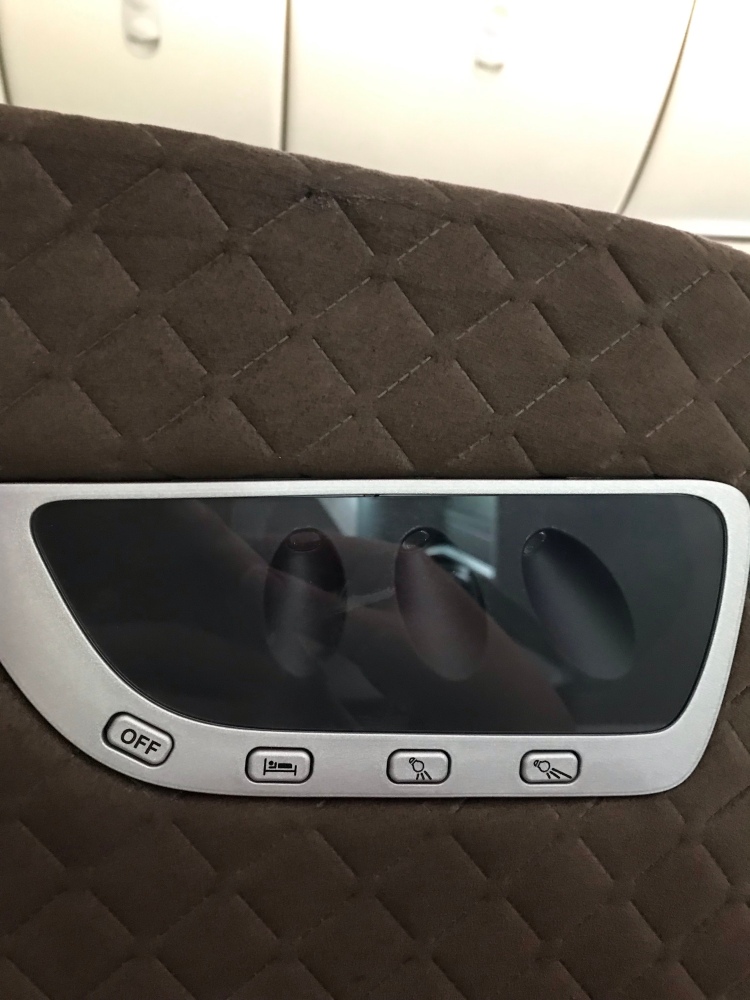 The seats are comfy and these go fully flat as well! Who does angle flat anyway these days. Although on a short daytime flight, I don’t think that beddings are loaded. A benefit of these seats are that they can be put fully flat while seated on with the controls. Unlike the previous one where you have to get up and flip them over.

The TV is large and high definition as well. Controls are also good and the screen is touchscreen as well. Paired with the awesome Krisworld system, you will never be bored. The controls are located to the side of the seats on a touchscreen monitor, near the flat top where you placed your personal stuff. The seats controls are nicely designed and intuitive enough. It is also not easily engaged when you move your arm for any accidental pressing. 787 also comes with wifi and business class passengers are allowed 100mb free, definitely enough for usage on this short flight. The wifi is usable although much slower than my previous one on the A380.

The table slides out from the area under the screen. I do have to say the table is rather rigid and you could not adjust the height. Furthermore, when the table is out, it is rather hard to get out of the seats.

Welcome drink is offered onboard during the boarding process with a choice between different juices. I opt for a glass of champagne! Recently Singapore Airlines swap their business class offering and is now serving Laurent Perrier. I am alright with that although it is a huge downgrade from the previous Charles Heidsieck. SQ really need to brush things up in business class since even airlines such as EVA is serving stuff like Veuve Clicquot La Grande Dame champagne and Fiji water. For a period I heard that even Krug is on offer.

We departed on time and take off was smooth. Today load in business class is rather light which is awesome and the crew were even more attentive. I appreciate that the IFM was hands on for the flight and even came over to say hello after boarding. The menu was a reduced flimsy one. Breakfast is served on the morning flight and there are 3 choices for the main. As usual, I ordered Nasi Lemak from Book The Cook. I do have to say that it is rather weird that the crew didn’t came by to confirm my order and ask for my welcome drink choice. Perhaps it is due to the short flight duration. 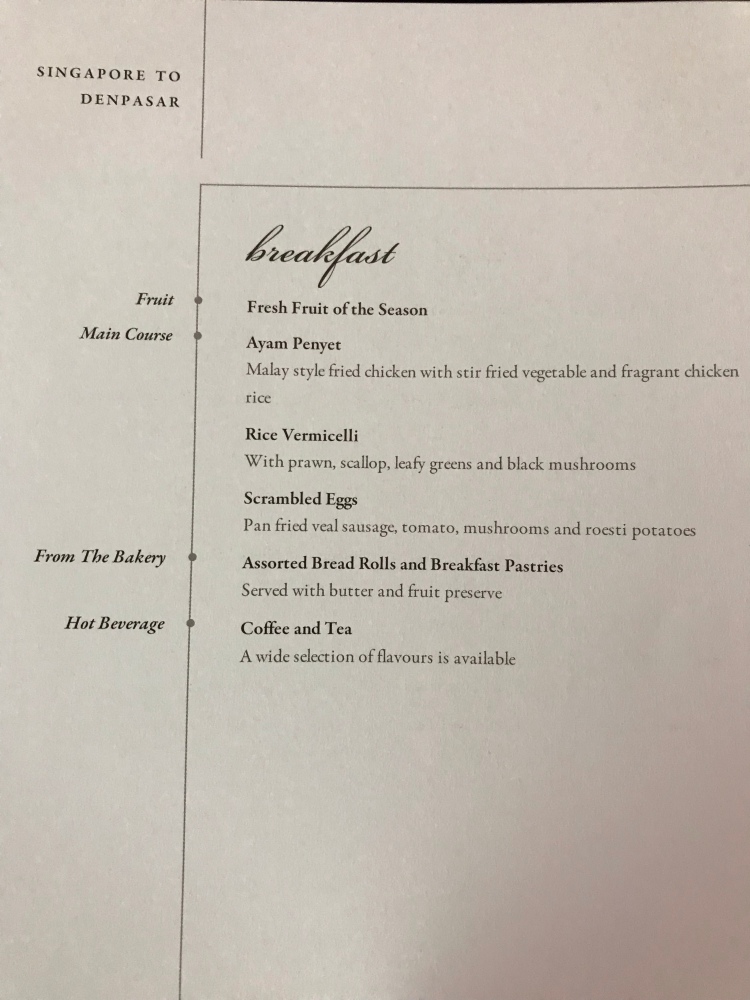 Service started almost immediately after levelling off and all the courses were served on a tray. After that a bread basket came along as well! I choose a croissant. I got a brazilian double espresso to go along as well as a SilverKris sling. Brazilian is always my go to coffee onboard. The meal came with some fresh fruit to start and then my Nasi Lemak, it was pretty good and the portion was alright. This is one of the best meal I had onboard. Service seems to be a little lacking and drinks refill are slow as well. 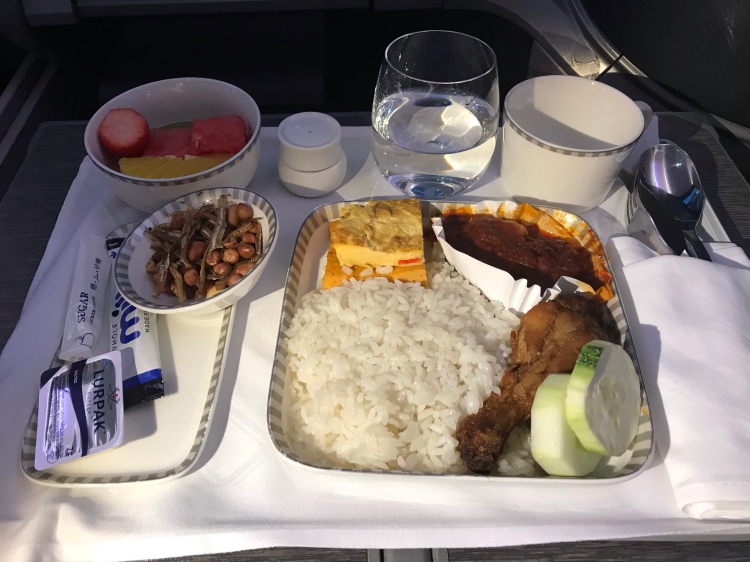 I had a nice chat with the crew after service on the impact of the covid virus and how some of them are wearing a mask and all. I basically spend the rest of the flight watching a show and sipping coffee. Perhaps this is how future flights are going to be?

Overall, the flight was good and the seats as well. I even tried going fully flat just to experience it and it is certainly good, even for medium or long haul. I will be looking to try it again on a longer flight given that this experience is a little short. I will definitely be happy with this even when flying to Australia or Korea. We had a smooth landing and even arrived ahead of time which is so annoying especially when you are in premium cabins. Life is great for a mere 9000 miles! What a deal what a steal!