I stayed onboard after the previous flight as I was continuing on to HKG, there is a stop for about an hour where the plane is refreshed. There is also a change of crew. It was actually pretty interesting to see the behind the scene action. It sure is busy and furious. In fact I think it was the first time. Seems like I actually wasted my money in getting the Canada Visa.It actually feels to be a little weird to be onboard when the cleaning crews are around. Perhaps they could keep a bottle of Krug to keep me accompanied. There was full occupancy in First on this sector to HK. Besides the 3 of us continuing on. 3 more Asian man board to join us. The crew for this leg is also a mixture of a Vancouver and HK set as well. For this 12 hours flight to HK, I was in 2F, the first row on the right.

Well, service was a mix bag, it is definitely much much bad than the other experience I had. I was given the menu to check out the offering while the boarding process was going on. It was pretty lousy that no drinks are served and we only got offered after the newly boarded passenger were attended to. It felt like second class citizens. In fact it is crap. For example the champagne glass was provided, with nuts and a towel. Although it is sitting empty on my seat for close to 5 mins before the crew came out with the bottle. And this particular lady was expressionless. It seems like she had a bad night of sleep. Every service interaction, she just had that “smelly” face. Here is the menu for the flight!

I shall not go much further into the amenities, seats and all since I have already cover them so extensively in my previous few post. Although it does seems that the D and F seats are less attractive than the A counterparts since they are less private. D and F share the same aisle. Although I personally do not find much difference since the seat is designed in a way that I am not able to see any other people at all. The meal order were taken right before taking off. Service is considered prompt and it begin almost immediately after levelling off, I was still pretty full but definitely still went for the full experience. The crew were subpar. No welcome at all from any of them. Although one of the Vancouver based purser seems to be the better one. I had a slight chat with her mid flight and it was pretty funny to hear that they only have a one night stay in Cathay City and not a hotel.

To note, there is no Amuse Bouche and After Take Off Drinks. I started the meal service with Caviar and Champagne, this is definitely the one and only way you should do it. Similarly there isn’t a personalised handwritten welcome note as well. Really different from my experience flying out of HK. It does seem that it is not a long haul short haul issue, but a crew and station issue. The Caviar came with all the necessary garnishes and sides. It is such a gorgeous presentation as well. A bread basket was served as well. However the blinis is soggy and not crispy at all, something so lacklustre! Krug remained on tap for me!

Service got slightly interrupted when we hit some chop enroute. Next up I went straight to the Double Boil Conch and Morel Mushroom soup. It came with the Beef Shank Cold Plate which I didn’t ordered. I finished the soup as it was really clear and yummy and left almost the beef shank untouch. I just wish that the soup were more well heated. Perhaps the crew are lazy. As a matter of fact, the congee that I had on the way to JFK on the outbound flight was at an excellent temperature!

I might have just went all Asian out on this, perhaps I am really missing home at this point. For the main course, I got the Stir Fried Lobster, it came with a side of vegetables as well. Rice was served as well. I had an interesting chat with the other “better” crew and it turns out that CX cook their rice on board. No wonder it tasted so good. This must have been my first bowl of white rice in weeks. While I was really stuffed, I still had almost half of the rice since the lobster sauce is so amazing and goes so well with rice. Presentation didn’t get full marks here, but the sauce definitely did. Lobster was fresh but just a tat overcooked. Krug and Lobster, heaven!

I had some Fresh Berries to end of the meal. This is one of Cathay “classic” dessert offering. You can definitely find it on your flight. Popular or lazy? Let’s see. They definitely need to refresh their menu soon. There is no ending of the meal with some chocolate truffle as per the usual. Really inconsistent service that I have encountered.

I caught a movie and rest up for a bit before having the bed made. I was feeling tired really after being up for almost 20 hours at this point and went to sleep with about 9 hours to go and had a solid 5 hours of sleep. You can’t deny the fact that CX bedding is solid and one of the best in the world. The bed is super spacious as well. I woke up just as we are heading towards Japan. 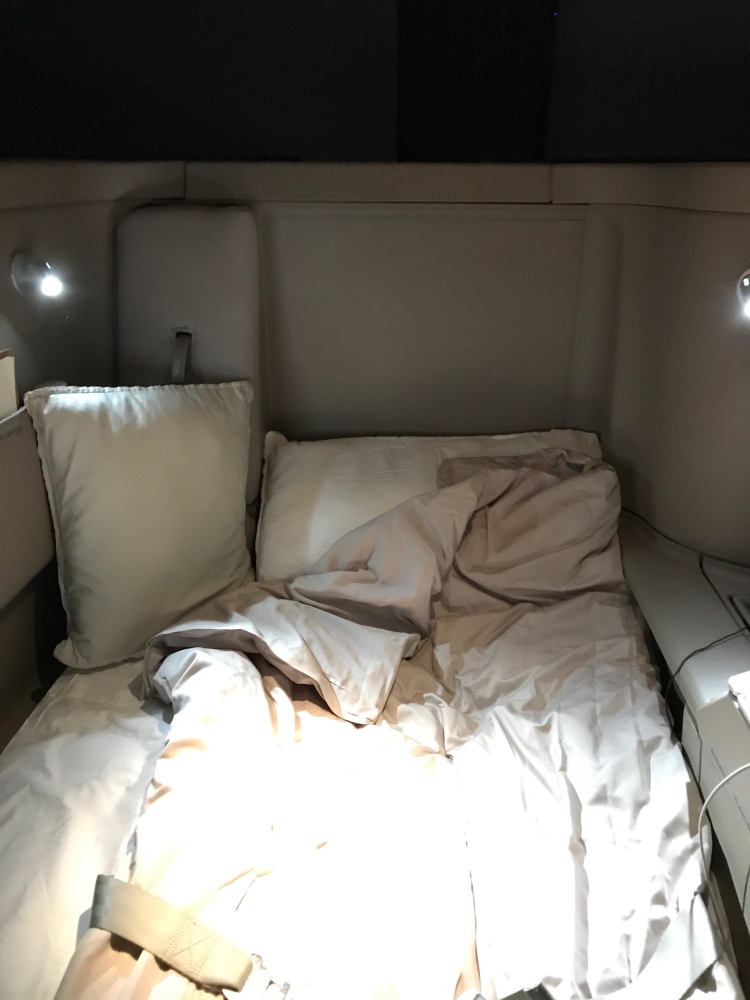 Feeling a little peckish, I had some mid-flight snacks as well. I actually wanted the crab cakes but was told they have run out of it. Really? It doesn’t seem like any of the other pax got anything since they are well asleep. Making me wonder where the crab cakes went. Without any other choice I went for the Char Siew noodles though and it was awesome. Tasted just like Hong Kong. Just that the soup is not hot enough again, same issue. Had lots of jasmine tea to hydrate up. I wanted something else, something asian and ask the crew, which was the lousy one. I gave her a chance and thought she would do some service recovery and offer something, perhaps from J. But she simply say no.

I caught another movie, which was nice and funny. Breakfast service started about 2 hours prior to landing. Weirdly, no hot towel to start the service, drinks not served first! The fruit plate came first instead. It is time for them to get their shit sorted out right! Breakfast also came with some croissants and fruit yogurt. Kind of a cookie cutter when they do not serve the yogurt in a bowl but just leave it in the packaging itself.

I got some scrambled eggs with bacon, canadian ham, potato cakes and roasted tomato and mushroom for my main. I have heard much good things about CX all day breakfast and it is time to give them a try. I love that cathay does freshly cracked black pepper right at your seat. The eggs were good and they were prepared right on board. The ham was tasty but really tiny, bacon was alright and a little hard. While the potato hash was stale. Oh to note, I wonder where my roasted tomato and mushroom went? Overall it is quite a good dish and not huge a portion too, which might be good. I went with a glass of the Green Apple, Mango and Guava smoothie which was delicious.

It was pretty funny that at the end of the flight I had a little talk with the nicer purser in the galley and I notice a bottle of Piper Heidsieck on the table. Interesting enough we actually wipe out the Krug supply. HAHAHA. She does seem surprised how little Krug was loaded. Approaching HK, the IFM came by to thank me for flying while there is no personalised goodbye from both purser and offers to return my jacket as well. We deplane via Door 1 and I am in a hurry to get a shower after flying for almost 20 hours. 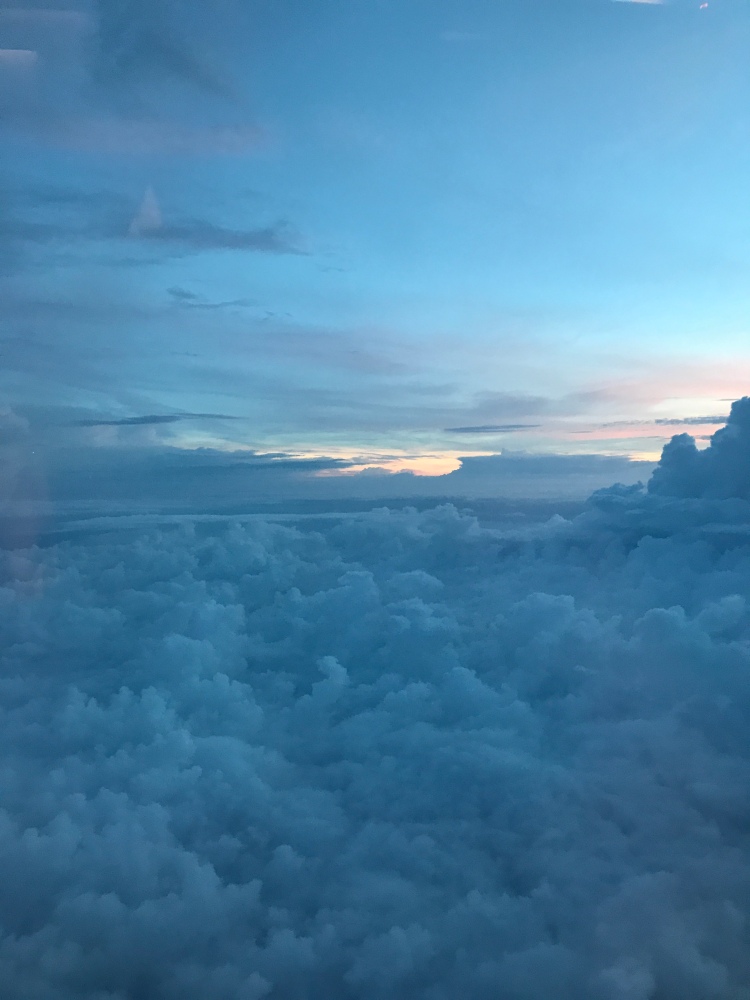 All In all, I think I had a subpar set of crew, one purser was amazing, while the other was total disappointment. In comparison to Kay earlier and Eun Young & Icarus two weeks ago. Sigh! While a good set of crew can really makes things spectacular, this is just normal. Now, flying direct for 16 hours or with a stop in Vancouver? Which is the best way to get to New York City. I am unsure! But perhaps I will do the 16 hours straight, it is much simpler and you get more rest. While I will grade my first CX flight better than SQ one, this is definitely much much worse than any of my other SQ flights standard. The CX soft product is just extremely inconsistent. There are simply so many faults that I have found. The difference in service offering and interaction. It makes a difference between a good and an awesome flight!