One of the main place and attractions that you have to go to in Amsterdam would be the Heineken Experience. It is one of the most hype, vibrant and ongoing places in town. It is actually a fancy name for a museum and brewery of the famous Heineken Beer. It is a really popular one in town. I mean, from anywhere in the world, you would have probably tasted a Heineken Beer before anyway! P.s A fresh one here tasted so good anyway! The Heineken Experience is located roughly about a 10mins walk out from Dam Square. It is located near the Albert Cuyp Market. You can get the tickets onsite but I will definitely recommend you to get in online since it will be cheaper and in the summer months, I am sure there would be crowds. I got the ticket for 16 Euros, once you enter the building you will immediately get a different vibes. 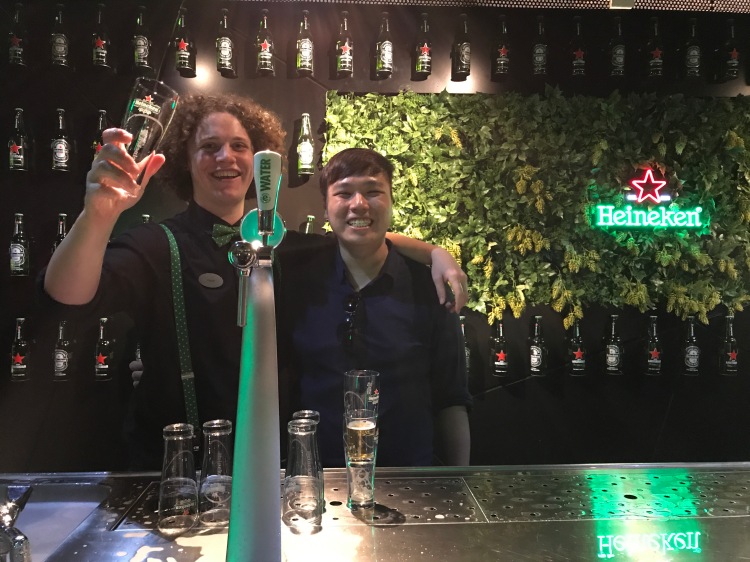 Everyone inside was happy, cheerful and just vibrants, they were dress in some nice uniform! Once it is around the time shown on your ticket, you can join the queue where your ticket would be scan and then they will pass you a wristband with two mini beer caps. This will be the caps that you can exchange for your drinks later at the bar also. 2 drinks are included in the ticket price, which takes off some of the cost of the ticket. You first start by seeing some of the historical stuff of the brewery where you can learn about their history and also some of the equipment that were used to brewed in the past. I pretty like this part actually. Check out some of the bottles and the logos, see how they have evolved from the past.

The next part is one of my favourite, they will show you how the well known Heineken Beer is made. As per the usual, beer is made with Water, Barley, Hops and for the Heineken Beer they have a very special ingredient known as the “Heineken A Yeast” that gives it the aroma and flavour. This is a well kept secret! They also have some samples where you can touch, smell and feel the hops and yeast.

After that you can be in their old brewery room where you can see all this huge bronze vats where in the past the beer is being made, they all look pretty cool. But now all of them have been made into informations screens that gives the visitors information and also showing the brewing process. Here you can also try some barley and water product which was definitely an acquired taste.

Now, this is the part of the trip where you can go into the actual stables of the Heineken Experience. In the past, the beer were being carried on carriage where the horses were carried them but now, they are just simply for exhibition and they were actually away when I was there in October. Apparently on holiday! Seems like they have a good life as well. This is also the place where the beer masters being you through a beer tasting session as well. From the ratio, the aroma, the color. I never knew that a beer will have that much theory behind it when compared to wine. Then you finally dunk the whole half pint down. It never tasted that good before. It is so fresh and crisp. I was pretty thirsty as well after the long walk and talking.

You could hang around the stables and then get your polaroid photo taken complimentary by the staff as well. It was a long q, but so fun when you can do all sorts of weird poses while standing on hay. Then the last part of the tour brings you to a little exhibition of their product now and also more history. You can definitely know more about their trip here.

For the last finale, here is the super active bar of Heineken! So many people are here, drinking pints after pints of beer! This is also the place where you can redeem the drinks included. It is really happening. Like a bar or even club. Music beer, everything is here! Apparently I saw a sign here that says that a beer will only takes 21 mins to burn off! There will many activities here, the most popular one will be the competition to draft your own beer and the one with the best ratio will it. The staff will always ask the crowd for their opinion.

I will really recommend the Heineken Experience to anyone that is in Amsterdam, it is really nice. I also feel that the prices isn’t too bad either. After all you get two drinks included as well! I really enjoyed it quite a lot. You can easily spend up to 2 to 3 hours here as well! Let me know if you guys enjoy it!