This is probably a rare guest on most reviews about food that you probably have googled for great suggestions in Bangkok. Mei Long Restaurant is sort of a hidden gem right in Yaowarat, the Chinatown of Bangkok. Known for the traders, precious dried seafood and numerous Thai influenced Chinese cuisine by the immigrants back then. It has now become the bustling market place early in the morning and afternoon and then a supper haut in the night for tourists and locals whom like slurping down some shark fin soup or pig organ stew, it is also famed for fresh seafood and Tzi Char style dishes. Expect crowd, sweat soaked clothes if you are here in the morning, and the accessibility doesn’t help either, although a simple cab right here may only cost about a hundred-ish baht, the time taken doesn’t depend on your luck though. Coming after the sun have set may prove to be a better choice with the heat behind you and far less traffic, but you do tend to miss out on the bargain on getting cheap dried seafood. In compared to the famous  T & K Seafood that is always packed and busy, Mei Long may seems more quiet, but if you know about this place, you will never stop coming back.

Here, you will find a family runned place, decorated in furniture and finishing that were probably 10 to 20 years pass it’s time, a couple of thai workers whom are actually fluent in chinese languages and many forms of dialect. Then you have the lady boss of the restaurant, whom is a 50 plus old lady sitting on a corner of the place, resting her legs on a ottoman while watching her tv. She does occasionally walk around to greet her loyal customers whom return regularly and walk into the kitchen to whip up some dishes at times. I guess the trick to maintaining a business and resting at the some time would be to keeping some trade secrets even while passing the baton! For us, it was a old family friend and we sure didn’t met for more than 3 to 4 years!!! The couple few specialities you have to order here would be the Shark Fin Soup, Oyster Omelette, Cod Fish and that one simple dish of Kang Kong! 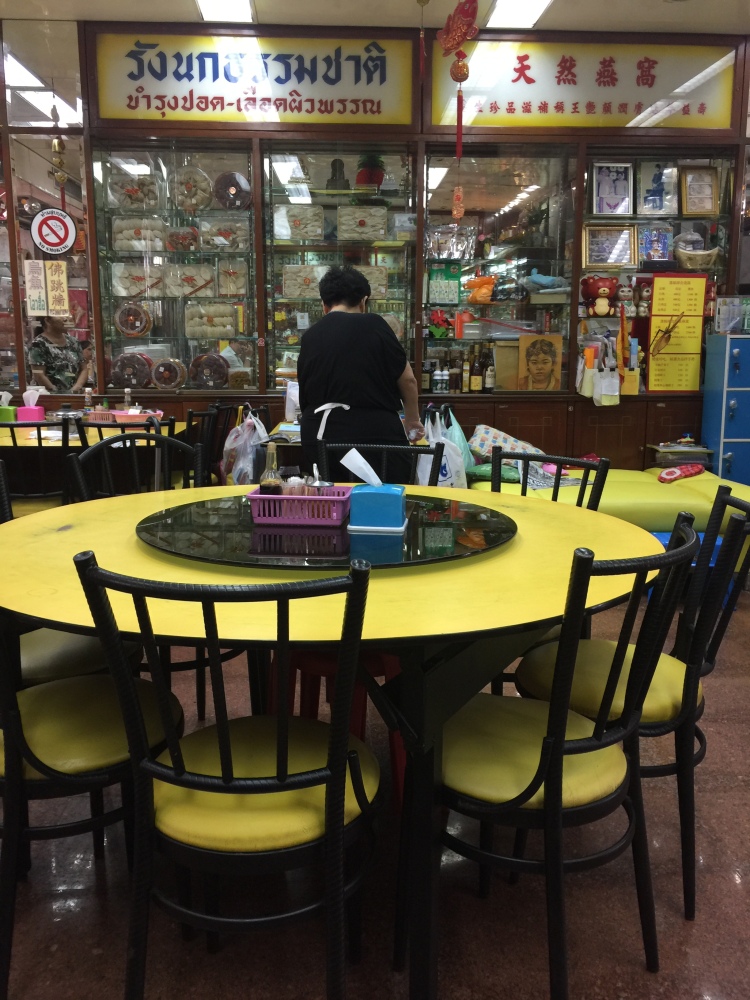 The first dish that we had was the Shark Fin Soup, It was the braised style. Made with their stock that they prepared daily from fresh ingredients. Then the steamed whole shark fin was put in. Together with crabmeat and the thicken gravy, it came bubbling in the claypot and a side of coriander and beansprout. Some people might like them to accompany the heavy gravy but personally I just like it simple with some pepper. If you do find them a tat salty, or heavy, go with the rice. THERE IS SIMPLY NOTHING MORE MARVELLOUS THAN HAVING SHARK FIN SOUP WITH WHITE RICE! The portion was good enough for 3 to 4 person and cost a mean 500 Baht! 20 SGD! The Shark Fin Soup here range from 400 to a couple thousand baht!

The second was the Oyster Omelette, but in fact we had the Shrimp version instead. This was also the dish that the lady boss, “Tau Gey So” went and cook specifically for us! HAHA perhaps the next time you are here, you guys can show this review and request for the Shrimp version as well! Although I really love Oyster Omelette, I actually do not eat any oyster, which is why I asked for the shrimp one. The shrimp were huge and succulent, coated with the flour mixture which makes it especially well. We opt for the crispy version this time around and oh man, the portion was huge! The addition of chives also made the dish lighter. Overall I pretty love the eggs and flour despite the dish being slightly too greasy. It cost about 180Baht or 8SGD.

Next up, we have the Cod Fish. The speciality here is having them fried and then drenched with the restaurant self made cocktail sauce. This gives it a crispy soft texture! While the presentation may not be the best but the taste was simply marvellous. This dish is priced accordingly to the market price, but for this we were charge about 800Baht, that is roughly about 32 SGD. For cod fish, that is simply fair. That fresh white meat, savory, silking down the throat, that is amazing. 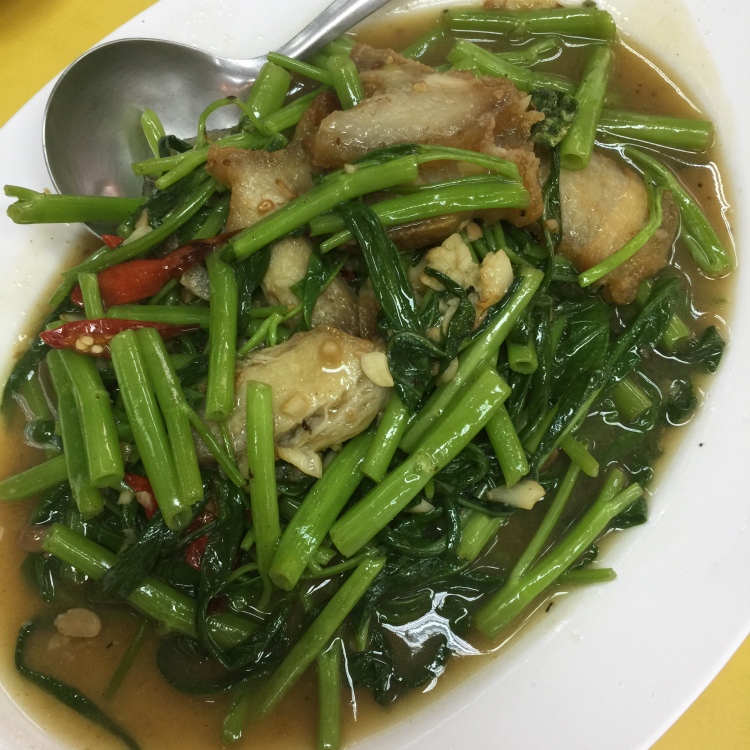 The last dish that we order was a simple stir fried Kang Kong! While simple, the different layer of the dish and the texture including the flavouring was definitely not simple. Some people says that the more simple the dish is, it is actually harder to make it good. This is definitely true, since how much you can elevate a dish of stir fried vegetables are limited. The Tau Gey makes used of salted pork and fermented beans to flavour the simple kang kong dish, with some usage of garlic and bird eye chilli! The dish is really so good with the vegetables soaking up all the flavour from the salted pork! And that sauce,  it is just that good that you can polished off bowls of rice with it! A dish on the high salt content though! Moreover, it only cost 100Baht. 4 bucks.

This is the best restaurant in Yaowarat and the prices are fair. The cooking is authentic and the ingredients are fresh. Do let me know if you are ever here and tell me your thoughts on the cooking here!