This was actually my second time visiting this lounge. Plaza Premium Lounge in Terminal 1 can be said to be the newest one in Changi Airport. It was only opened a year ago. In comparison to my previous visit, this time around I arrived in the wee hours. I was admitted after presenting my Priority Pass membership. A great feat about lounge access would be the Priority Pass membership, which provide you with access to more than 800 lounges around the world. While paying for access is expensive and definitely not worth it, many credit cards now pair up with a Priority Pass membership which entitles you with a couple free visit or even unlimited ones. A great example would be the Citi Prestige Card. Perhaps it is the timing, but the lounge definitely didn’t seems to be crowded or busy on my both visit. There were a few people who arrive after me but it is never too packed or noisy. This is also the reason why Plaza Premier Lounge is such a nice, relaxing place to spend your time.

Another great reason of this lounge would definitely be the refreshment they serve here. In comparison to most of the Priority Pass contract lounge, this Plaza Premium Lounge actually serves up cook to order meals that is really awesome. Usually most of them will just offer a super limited buffet and some stale pre made food that have been left for a long time. This is also the main selling point of the lounge, It can’t beat having fresh, piping hot food at any time of the day. That is really awesome given that you could have a “free” meal while waiting for your budget flight. This makes you save much more too! On my previous visit during dinner time, they showcase a all day menu with 4 choices, from local favourites such as Hainanese Chicken Rice to a All Day Breakfast. Btw, the Chicken Rice is really good, definitely comparable to the stuff we had outside.

I would have believe that they were serving breakfast given the timing that I was there, however, they were still serving up their supper menu which is valid from 11pm till 6am. In fact this would be even better since I would be able to try out more stuff for you guys! Let me first share about the supper menu, which had Singapore Laksa and Hainan Chicken Rice. The chicken rice was legit the best. Even though it might feel a little too much to have rice, it was still the right decision to make. The rice was delightful and then the chilli sauce also taste authentic and spicy.  I also had a spoon of the other choice, Laksa. That just tasted ordinary and normal.

Then after 6am they had the Breakfast Menu which was available. They offer a Breakfast platter with eggs done your way and then accompanied by Sausages, Tomato, Ham and Toast. I was actually pretty full by now but decided to take one for the team and try the platter. I went without toast. The scrambled eggs was cook to perfection, soft buttery yet not too runny and uncook. While the rest was just ordinary. But still, the Chicken Rice is still the best best from this lounge. 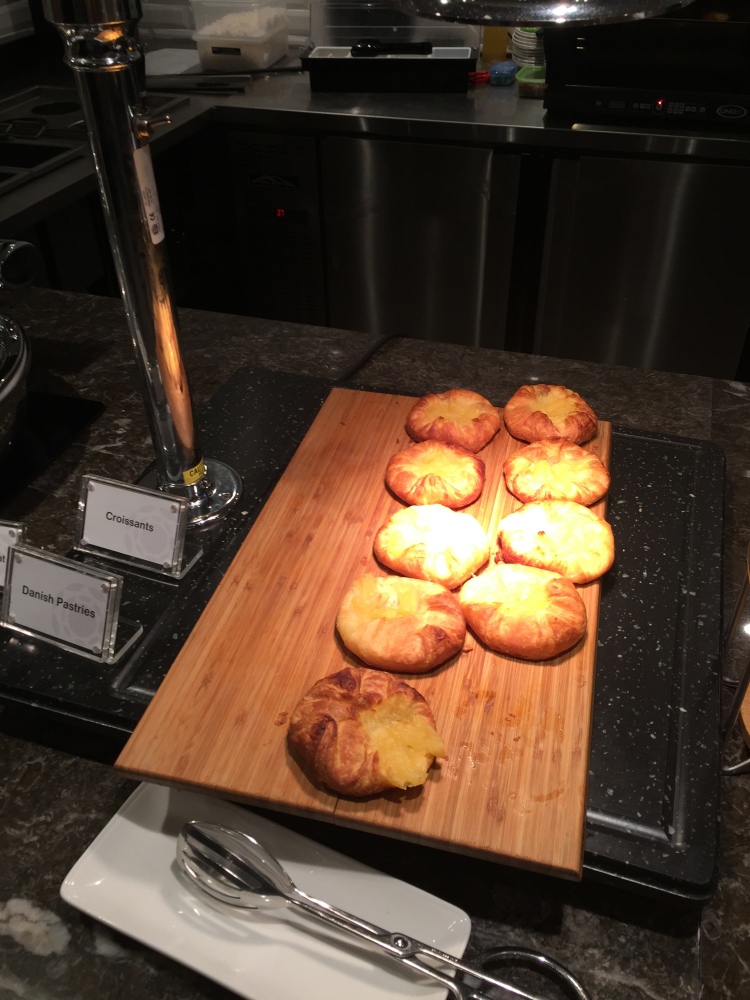 Besides the made to order menu being available, the lounge also has a small buffet areas where the cold station were available in the morning. They had cold cuts, yogurt, salad and cold soba also. In addition to that, there was also two soups available. The espresso machine also make out a decent cup of latte! Then in the fridge you could find juices, bottles of water and soft drinks. Some that got my tummy grouching that day was the freshly baked croissant and danish pastry they had. And they literally flew right into my stomach once they were out of the oven. Having a freshly baked croissant was really the best, flaky and crispy.

The lounge has all sorts of seatings, from the traditional dining tables to high top bar counter kinds and also a couple of separate areas for lounging. From the normal crouches that you sees in lounges with planes view to a couple special group sofas that were really comfy. The lighting in the lounge was really dim too, it might be conducive for resting while in the opposite, it might be too dark for those who are trying to work or grab a bite. They also had some private semi open rooms where those travelling in a group could use. It gives you more privacy and spaces for meetings and discussion. Plaza Premium also provides other services which are payable, from renting a private resting suite to having a manicure. It certainly isn’t cheap but may be a good alternative to booking a airport hotel. It is worth noting that the showers aren’t free here.

The lounge is really one of the better ones in the Priority Pass collection just a little on the bad side would be the chargeable alcohol and also the need to pay for showers which I believe is the key amenities when people look for at a lounge. Hope you guys love this lounge as me too! Next up, I would be sharing about the highlight of my trip, Conrad Bangkok.