Melbourne International Airport is near to the city, connected by both the Skybus or taxis to the CBD area. If you guys still remember the first episode, I mentioned that I chance upon a deal on Emirates where my round trip ticket is only 588 Singapore dollars. Emirates is one of the special foreign airline that flies to Melbourne directly from Singapore. Singapore is a little like their hub for this route where they fly from Dubai to Singapore and then to Melbourne. Together with the bling and gold, Emirates actually represent a better deal then my dear Singapore Airlines this time around. Emirates actually sent you a email offering an upgrade to Business Class for 500SGD when the flight isn’t full. While unnecessary for a middle haul flight, some might give it a try. I took a cab to the airport and arrived slightly short of 4pm for my 6pm flight. The ride here was smooth and the car was comfortable. Given that I was a little sad to say goodbye and Melbourne International Airport did not have any lounge that is associated with Priority Pass, I make sure not to arrive too early since I would not have any lounge to visit. Priority Pass seriously need to up its presence in Australia!

Melbourne Airport looks a little old to me, dark and gloomy can be used to describe best. Sure isn’t ground breaking or innovative while comparing to their Hong Kong or Korea counterpart. It is important to take note though that you are in the correct part of the terminal since both the international and domestic terminal are connected. Check in was a breeze, there isn’t much people in the queue and there was plenty of counters. Furthermore, I had already done the web check in a couple days prior. With the boarding pass soon in my hand, I made a last ditch effort to the Lost and Found to try and see if my charger lost on the way out would be there. One amazing feature that I came realise regarding Emirates is how they dress on their service image! Even in the outstations overseas, their ground staff also wears the iconic cabin crew uniform with the red scarf! Seems that not only the cabin crew owns that uniform. Imagine if SQ does the same stuff, the Kebaya will not be unique to the cabin crew anymore! Security was again a breeze and once in the transit area there is quite a number of shops and a few fast food restaurant. There is also an extensive duty free area where I used the opportunity to grab a IPhone Charger since there isn’t anymore fate on my last one! 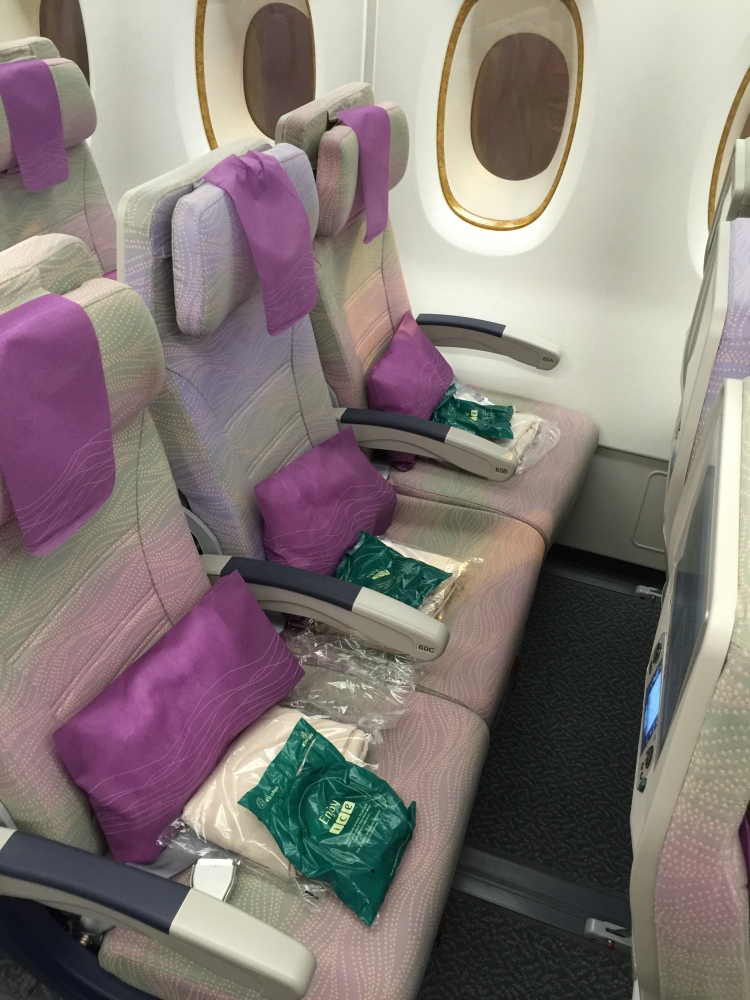 Boarding was organised and well done, the aisles aren’t crowded. I even had a chance to pictures some of the cabin as well. On the A380, Emirates does the boarding through the front door on the lower deck. Emirates configuration are slightly different, Economy takes up the whole of the lower deck while the upper deck would be for first and business class. So while boarding, you get a glimpse of the grand stairwell. It is really magical, like those in theatres and concert halls! Just look at that bling and gold, there just try to make it visible everywhere! Similar to the outbound flight, the crew were a cosmopolitan one! This time around there is a Korean and also a Caucasian one working my aisle. While they are well trained and polished they are also slightly more friendly then the outbound one. I can feel the difference but there is still that cold feeling there, they also doesn’t seems to have an identity.

Service started roughly about an hour after take off. Although it was a little slow getting to me since I was seated in the middle section. They started with special meals before going down the rows. After the meal is served the bar service immediately follow up. I had a great Bordeaux white in addition to a orange juice to accompany the Creamy Chicken with Potatoes and Mediterranean Vegs. The dish was great, hot and delicious, although salty though since they seasoned it heavily for the altitude. The potatoes tasted so delicious in soaking up all of the creamy sauce. Recently I had a very funny story from a friend of mine whom is a cabin crew. She explained that actually when we the passengers tries to be helpful to place all our rubbish and bottles on the tray after eating. It is actually more troublesome for them since, if we make the plate like a tower, it can’t fit into the cart. 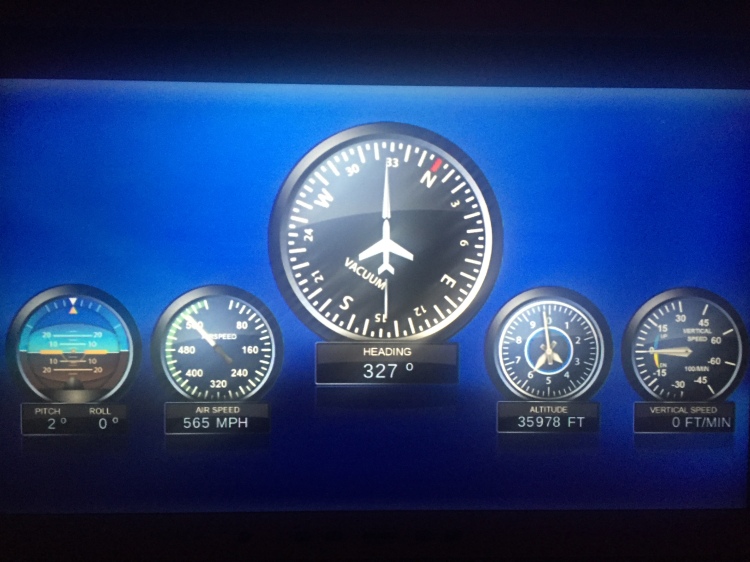 Emirates also has an incredible onboard entertainment system with thousands of shows and programs. You certainly won’t get bored no matter how long the long haul is. The screen are much newer and higher resolution than other airlines and even the outbound flight that I have took.  Furthermore, on board the planes, wifi is available and it is affordable. The first 10mb is free while an additional 500mb is only 1USD! Although the speed is barely usable, it is still good to be connected while 35,000 feet in the air. For the aviation fans and pilot to be in the future their onboard cameras and flight information screen are extremely intriguing for me. They had detailed information like true airspeed and mach, they also show screen grabs from the cockpits flight computer! I could see the heading, pitch. I especially love this screen shown above.

Something that I am really impressed was this crew that go beyond his duties. Late in the flight where most are sleeping, this particular crew came around with glasses of juices and water for those who are still awake. I especially appreciate his effort, since whenever I am flying, I get especially thirsty. Drinking alcohol onboard certainly didn’t helped too! Right before landing, they serve a small little snack. It was a choice between a beef pie or a cheese and vegs pie! The portion really looks miserable since it was only a small pie on a huge plate, like smaller than a olympic medal! Although with that being said, I appreciate the effort of them serving a pre landing snack!

Landing was smooth and I am so glad to be home in my country! Immigration was never going to be a problem for me and it is home sweet home. As much as I love to travel, it always feels nice to return home for a short while and rest. This marks the end of this Down Under To Mel trip series and I hope you guys enjoyed it and have been following through! Do give me comments and things to improve on and I will soon be back with a recent trip that I took to Bangkok! Stay Tuned. Adios!