A warehouse stocked with food? I literally mean like freshly bakes, poached eggs, avocado and a warehouse that smells of coffee? Your answer is right in the heart of Melbourne, right on Guildford Lane! You do actually have to screen the tiny laneway with your hawk eyes to find out actually where the cafe is. One of the greatest things about bars, cafes in Melbourne are the location their are housed at, with many in the numerous laneway that the city have in town. They simply hide in plain side and you will never realise how it’s like from the outside. It may seems desolated and quiet with totally no traffic on the outside, but once you enter them, it is a totally different oasis of itself. That is actually the case that I had encountered here at the Krimper Cafe. I arrived slightly before 11am in the morning on a weekday. There was no one outside and it certainly took me some screening before noticing that little little blackboard on the ground and also the mini neon sign. Disguised into the surrounding, with the 1980s kind of metal and wooden planks warehouse doors. There was even a punty Strictly No Admittance and All Enquires At Office wordings on the entrance. You just gotta push open and let your eyes be surprised. 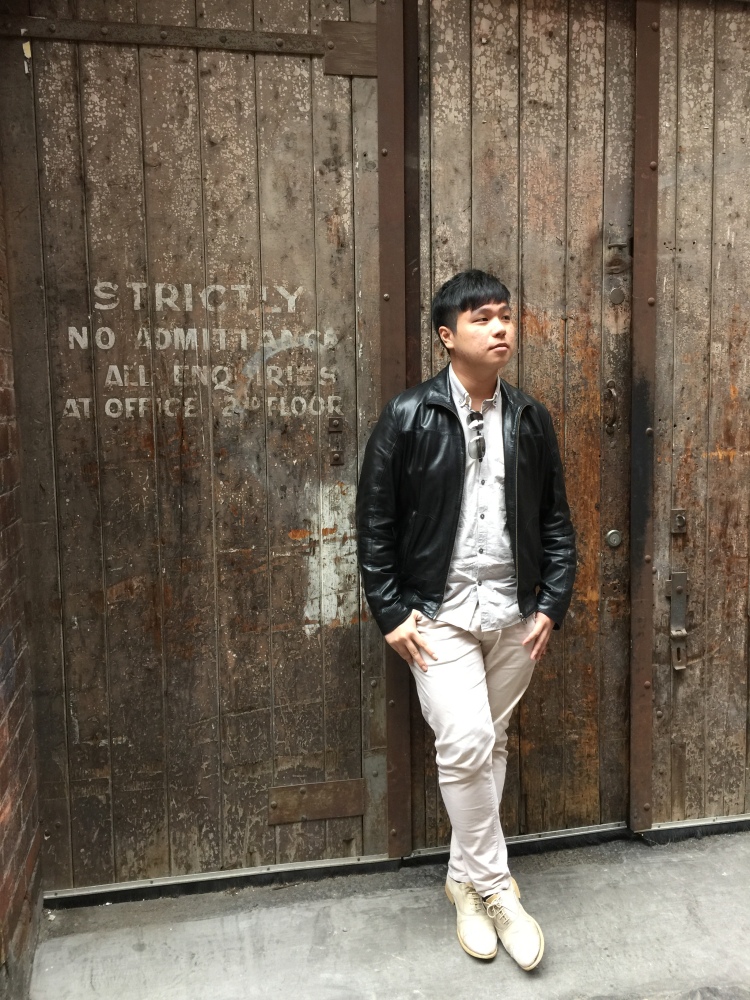 Red wooden brick building and the typical rusted metal and wooden door in a warehouse, you should be expecting some kind of underground fight club or some shady dance club. Instead you feel the warm homely vibes once you are inside, shield from the cold chills outside. There isn’t much renovation and yet the natural look of the warehouse turns out to be the selling point of the cafe, with wooden ceilings and even a portion of those old school plumbing system. The cafe also features a tiny window into it’s kitchen showing a little peak on the food you are going to be served. Then at the main counter you have the typical cashier and also the bar where coffee is made and the bakes are shown. There was no queue or crowd waiting for a table but it isn’t quiet inside too. With may of the cafe hunters like us snapping and trying out the food while the locals and business man chatting over a cuppa of freshly brewed coffee. The chitchats and scent of coffee greeted you once you are inside. Even though it isn’t decorated in classy chandeliers, mirrors and marble tables, the rugged, no fills metal and wooden furniture presented themselves in a flair of it’s own. It does represent and present the vibes and comfortableness of Krimper Cafe wish to show and create. 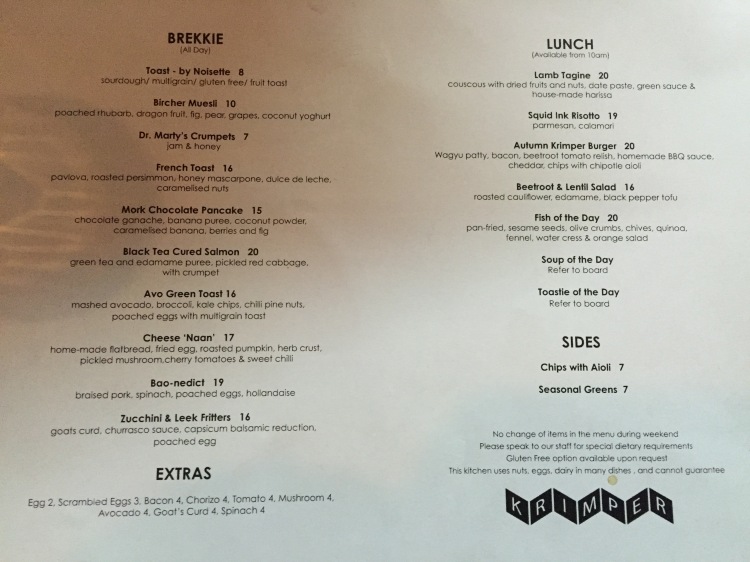 It is a short walk away from the nearest tram stop and really hidden in an alley, just look at he red bricks and pay attention to the little neon sign. Being shown to the table I had a look at the menu and quickly decided my dishes to order. Krimper is open from 7.30am till 5pm on weekdays and 8.30am till 4pm on weekends. Krimper does not serve up all day breakfast but also a lunch menu. Their menu is really varied and take into account of many concept from other cuisine, like Indian or even dim sum influences. A particular unique dishes caught my eye and I just went for it. Cheese “Naan” was the dish that I ordered and we also got another dish to share. Upon recommendation from the waitress, we ordered the Fish of the Day as per her recommendation. Above is a picture of the menu. It has since changed slightly and the most updated one can be found on their website. I also got a Chai Latte to accompany my dish.

Perhaps this could be said as the best pairing of my cafe journey here in Melbourne, the Chai Latte came spiced with strong flavours of ginger and cinnamon, it is perfect for the weather as it really warm you up. I like the little sprinkle of ginger fine sugar powder on top of the latte too. Furthermore, cloves, ginger is a perfect match for the dish that I ordered. The Chai Latte cost 4.5AUD. The dish that came can be separated into two parts, first of the naan, it came crispy on the outside and then it is well flavoured on the inner and tasty, I like how little goat cheese curds were sprinkled on it. The soft soft curds being smeared on the naan, it is really delicious. Then on the other side was a spiced roasted pumpkin and they were really sweet, I like how the tender pumpkin and the spices that was used. Then some caramelised onions and coriander were used to garnished the dish. I just feel that the dish seems separated and doesn’t complement each other. The Cheese “Naan” cost 17AUD.

The Fish of the Day came with 2 fish cuts that was flaky and the skin were well panfried, the perfect way to do it, then it came with a quinoa, watercress and orange salad. The dish was well seasoned and intend to be a light one, I feel that the fish was delicious and the salad also goes well with it, quinoa has many health benefits and the crisps of the watercress and sweetness from orange is really good. Even though some may not like it raw but it is really good. It seems that Krimper loves to utilise Chinese herbs and this dishes also had the usage of coriander. The cracked black pepper on the dish also elevate another texture for the dish. But at a price of 20AUD I really find it very expensive as the portion is really small.

For the Instagramers this place will be a heaven for them, a warm, low-lit cafe in a converted warehouse from a sawmill in the past to a cabinetmaking factory and then now a cafe. The tables, the bicycles feature and also the doors are all great photos spots, here you could still find old machinery bases embedded in the floor, an old staircase broken down to make up the tabletops. The place is great but the prices definitely isn’t gentle on your wallet, I find it a tat pricey.

Following on, I will be sharing my thoughts on the food, travelling and shopping in this city where it had always been voted the best one to live in in the world.