Upon hearing news that Singapore Airlines had recently renovated their lounge in Hong Kong, it gave me extra perks for my flight back home. To think of it now, sometimes fate is extremely mysterious, because of a decision I made it results in various happenings. It may be good or it may bad. But the decision to upgrade myself to Business for my flight back is definitely one decision that I will never regret myself and the 21,250 miles that I used was definitely worth it. Given the experience and a new friend that I made on board the flight, Josie. This flight was still pretty fresh in my mind. Cheers for many more flight that I could fly with her on board, it’s a even greater way to fly!

Given that I am currently spending 90% of my time in Tekong, watching those landing and taking off, my yearn for flying has never been that intense! Back to the review, 3 days prior to my departure back to Singapore, at the hotel, I was checking in on some of the availability and decided to phone up the Krisflyer Membership centre to upgrade to Business, why not? And this is a decision that I am so glad that I made. The upgrade was cleared almost immediately and my meal and seat selection was also made. I will be sharing about the flight soon and of course my experience with one of the greatest stewardess onboard, Josie soon! But first, let’s talk about the ground experience first. Given that SQ has many flights in and out of Hong Kong Chek Lap Kok, Hong Kong is a major base for SQ, with many flights daily to and fro and also as a transit point for their flights to the States, one of them being SQ2 to San Francisco. Thus it is clear to see why they decided to invest in their ground support and service, especially for the premium passengers, another great perks for Star Alliance passengers too!

After grabbing some of the most delicious Egg Tarts, from my hotel in MongKok it is only a short 30 mins taxi ride to Chep Lap Kok and I proceed to the check in counter in Terminal 1 immediately. It is worth noting that Hong Kong International Airport has 2 terminals, with terminal 2 being only a check in facility, so most full-fledged airlines will be housed at Terminal 1, with it being the bigger and also the more staffed and housed terminal. Being a shopping haven, the airport is also full of shops and restaurants, making last min shopping and souvenirs grabbing a mean feat. There was a couple of people queuing at the Check in Counter despite me being early, speaking about the number of flights they have, I was actually being served at the First Class check in counter since it was empty, I also saw them rolling out the suites carpet and signage since the next flight was the A380, which was the one that I am on! It probably too less than 5 min to clear everything and there lays the Blue Boarding pass, sparkling at my eyes. I recently received news that SQ have changed their boarding pass design, which was a meh for my since I prefer the previous colour coded one, damn, I don’t think I would have any more chance to collect the red and gold ones. There is something exemplary that I have to point out, which was the good service of the ground staff, I was previously turn away by the security since my mum had some brand new cosmetics products which was over 100ml, I was having a headache since I do not want to throw it away and my luggage is already sent off, the First Class staff were great as they went over their limit and secure the cosmetics safely in a box lined with plastic and cardboard creatively to prevent them from breaking! Although they can’t make any promises, but I can see their effort and hard work, with these, I can say that I am pleased. 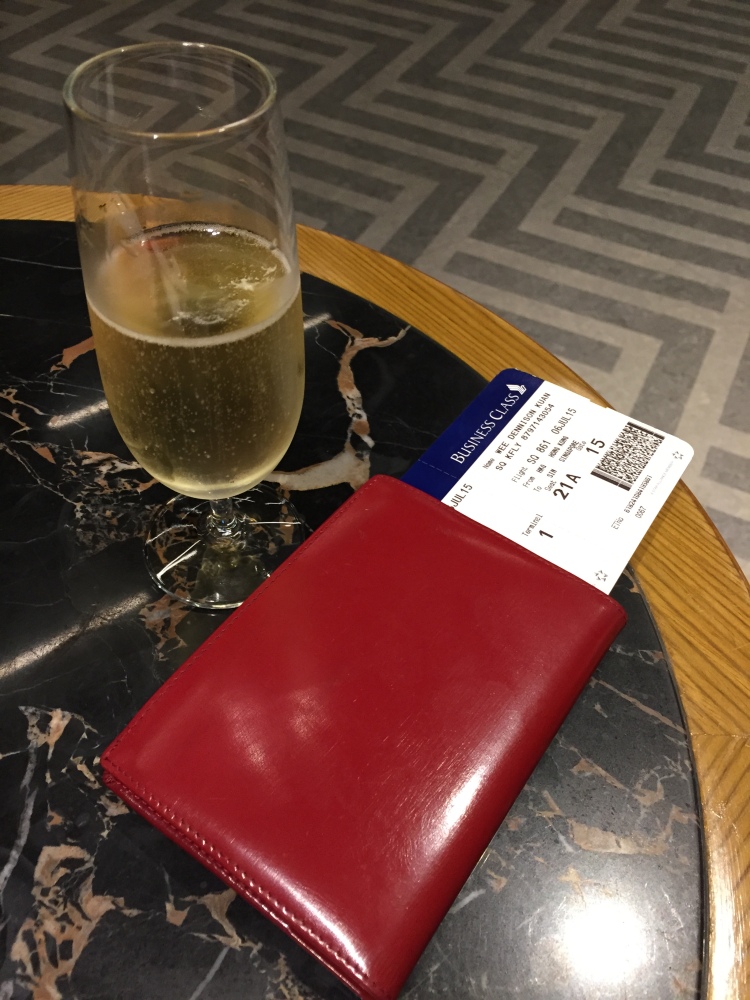 The lounge was about a 10 mins walk from the customs, which may be a little far but given that it is directly opposite of the departure gate I am pleased with it! The lounge look fresh and new, with the typical décor of SilverKris, white silver marble. There was 2 agents seated at the reception, they just briefly glanced at my boarding pass and I was addressed by name and in I go! At first I was quite disappointed by the lounge since it felt dark and gloomy, since it was all coved up, without any natural lights and view of the tarmac or the terminal.

After settling myself down at one of the seats I went over the take some pictures and also it time for some pre flight feasting, without having lunch earlier on, I decide to feed myself but also careful not to over eat given that there is a great meal waiting for me onboard too! Seeing that there is a manned bar in the Lounge, I walked over to look at some of the selection and settled on Champagne, I guess there is nothing better than Champagne buffet going on! Piper Heidsieck Cuvee Brut was served which was perfectly drinkable, although it aren’t as good as the Moet of the Dom or Krug obviously! This is something that I was pondering at the time, Why does an outside lounge has a manned bar while their flagship one in Changi Airport doesn’t has one? Perhaps something for the management to look at! A plus point for the Hong Kong Lounge!

The food option was also great having many hot dishes with also fresh fruits and juices, there was also canned drinks and bottles of water, perhaps another plus point, there was Haagen Dazs Ice Cream too!!! Being a Singaporean, whom has been either traveling or working abroad it is great to see some of the local food in the lounge, allowing me to savour it before even reaching home, this is a plus point that I wanted to point out! Definitely kudos! There was Laksa and Wonton noodles being cooked to ordered! It’s quite nice when I see Singapore known delicacy abroad our shores, being famished, I had a Wonton Noodles ordered to go along with my Champagne, hey I guess that pairing works perfectly well! If unsure in Hong Kong, always go for Wonton Noodles, you could never go wrong with it as everyone cook them well! Aladente noodles, packed full of shrimp wontons and a great broth to go along! 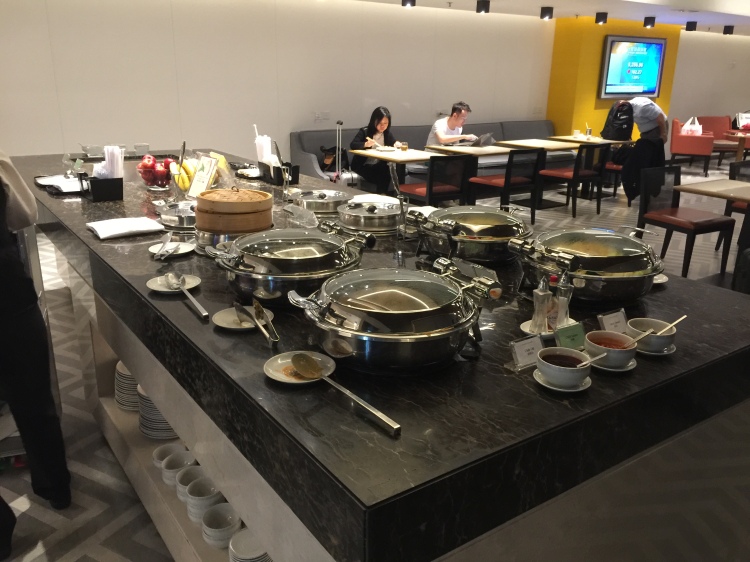 After the meal I guess its time to take a look and review the toilet before I leave, nothing impressive, but clean and well maintained I would say!

To conclude, it is a perfectly well lounge, although it can’t be compared to the great Istanbul Turkish Airlines Business Class Lounge! Some points to ponder includes the Bar issues. Stay Tuned for my next review, which will be my best business class flight back to Singapore with Josie on Board!