Continuing on my Champagne adventure, I am particularly interested in what is coming next. A private visit to Dom Perignon and the Moet Caves Cellars which is the largest and most expensive among all champagne house as well as in the area. Moet & Chandon can also be said as the most famous champagne house of all time! Furthermore Dom Perignon, the world class famous, highly prized vintage only champagne! I haven’t been this excited in a long time. For those who might not know, Dom Perignon is a champagne brand under Moet & Chandon. But it is released under its own branding Dom Perignon itself. Think of it like a BMW M Cars and normal BMW. They share the same facility but have different cellars masters as well as release. The Moet & Chandon Champagne house is located in Epernay, the other major champagne town in the Grand Est region. It is just a short walk from the train station and located on Avenue de Champagne! Can I live on this street?

First and foremost, I will like to express my gratitude to Dom Perignon as well as Joelle for arranging this Dom Perignon private VIP cellar tour and inviting me over! Do note that while you can walk in to the champagne house and check out some of the common areas as well as walk in for tours to the normal Moet, Dom Perignon tours are strictly by appointment only and I will recommend you to reserve it 6 months in advance, they are highly popular. Tours start from 115 to 250 Euros for Dom Perignon and from 25 to 45 Euros for Moet & Chandon. Dom Perignon are private tours only while Moet are group tours. While you will visit the same cellars, you will visit different parts of it as well as knowing different information respectively for Dom Perignon or Moet & Chandon.

I am so happy to be visiting one of my favourite champagne brands in the world. This time around, I will not share so much on the making process but rather the unique points of Dom Perignon since my Taittinger post is rather extensive already! It was a charming building on Champagne Ave, when you enter the Moet & Chandon house, you will see a status of Dom Perignon, the well known iconic Benedictine monk who made important contributions towards the champagne that we drink today.

The interior is modern and super grand. While Taittinger is old school, this seems to be like a luxury boutique. There was a nice welcome and our tour was verified. There was a wait while they called up our guide and I took the opportunity to check out some of the history. The champagne is exactly named after this 17th century monk!

Our host is a nice knowledgeable guide, Evan who introduce himself and then brought us to the cellars. He was really engaging and even wonder why do we like Dom Perignon so much. We started out with the history of Dom Perignon once we enter the cellars which is so comfortable.

Despite the sweltering heat upstairs. It is still constantly cooling down here. We learned that the ageing for Dom Perignon is a minimum of 8 years and it could even go upwards of 45 years for the Plenitude 3 series. This shows how much hard work towards a bottle of champagne and why it is so expensive. In comparison the laws only require a basic 15 months ageing! DP was first released in 1921, with only 47 vintages released to this date. Dom Perignon are only released when the cellars masters determine that the currently year produce is good enough for the requirement of a Dom Perignon, if not no production will take place. The currently release is the 2008 vintage and the current release of Dom Pérignon Rosé is from the 2006 vintage.

As I mentioned the tunnels and caves of cellars here are the largest in the world and in the Champagne area, there are around 100 KM of it under and around the city. We then share a lot about the chalk and how these chalk are crucial to the production of Champagne. Vines here are never watered and only gets water naturally by the rain and when the weather is dry, the vines will pull out moisture that is being retained in the chalk.

The first DP, 1921 was first sold to the US market. The champagne house also owned more than 1200 Ha of vineyard in the area and the other supplies are from other grower in the region. You will see that the cellars here are nicer and a little renovated after all they are more touristy that the rest. 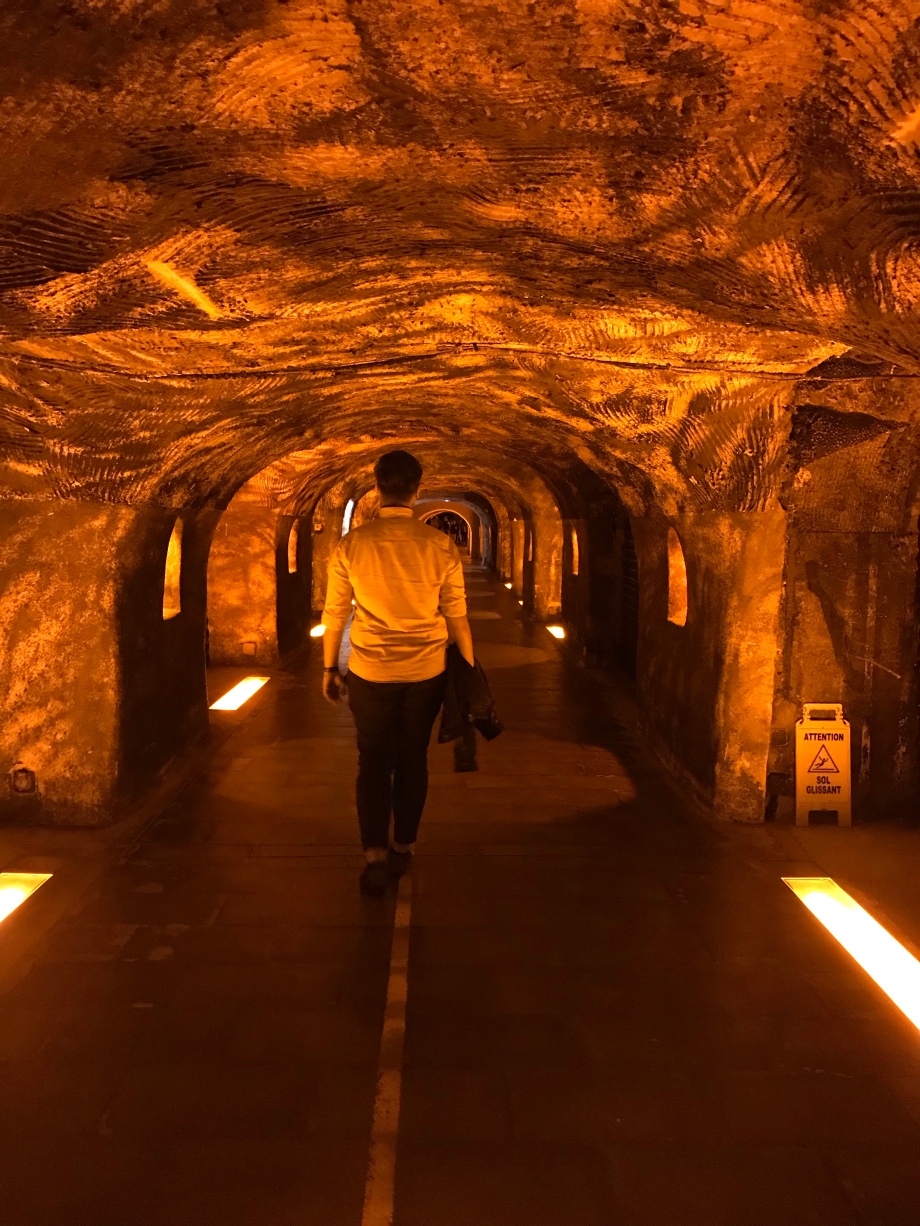 DP also only use steel vats, this also prevent oxidations. This might explains why you usually do not get a nutty depth or smokey tasting notes since no oak cask are used, unlike Krug. Dom Perignon is a blend of Pinot Noir and Chardonnay, the combination are not fixed nad you can always taste the minerals from the river soil and chalks. Dom Perignon prized on being fruity, crisp. The Cellars Masters focus on the word “Harmony” which is constantly being stressed. The difference in the production process differentiate itself from other prestige champagne and the oxidise makes it retain its harmony as well as fruitiness. They use a majority of Grand Cru grapes and a percentage from Premier Cru. All about the ideal blend. 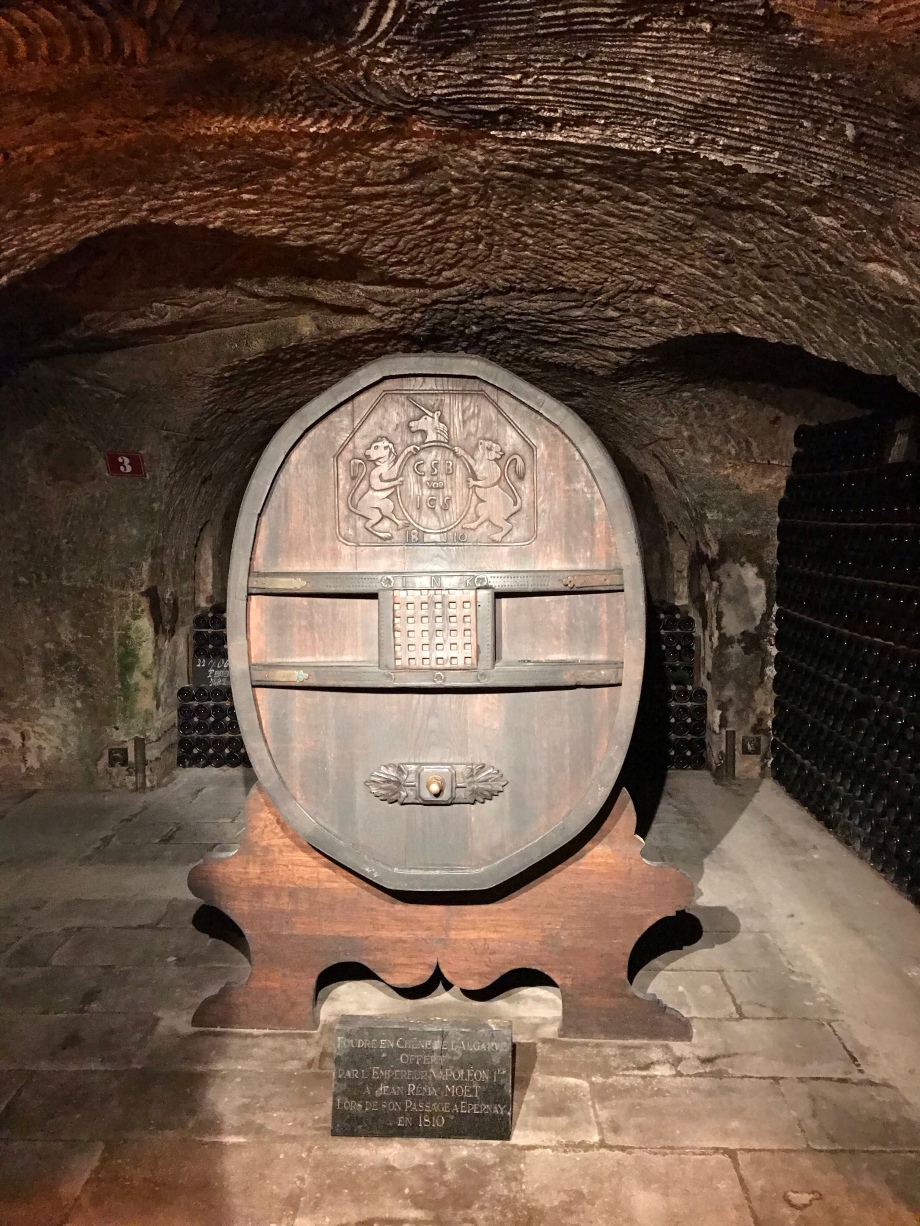 What is impressive is the bottle fermentation which goes from a minimum of 8 years. For the normal series, known as the P1, they are being sealed with a crown cap as per usual. But less than 3% of the production, are being selected for the Plenitude Series or for late release known as the P2 and P3 are sealed using a cork straight up to allow it to aged better at longer period of time. The cork preserve the freshness and vibrancy of the wine. Some larger bottle ageing over here.

These wines are left also aged differently, after the usually flat ageing for 8 years, these later release vintages are then turned upside down to aged. This period can be up to 25 to 30 years for the P3 series. Every bottle of P2 or P3 is also disgorged by hand and then tasted. Strict quality control here. P3 are also the most expensive champagne in the world and the rarest of all Dom Perignon. A bottle of it can go for thousands of dollars. It is interesting to see the difference in process from Taittinger previously. I am loving seeing all this millions of bottles in the cellars. I would love to be one of those that get lost here.

Before we end of the tour and head to the tasting, Yummy! Evan also show us some of the rooms in the house including one that a French King once drank the iconic Moet resulting in the Moet & Chandon Imperial Brut NV that is sold world wide. He is also responsible for why the champagne has an “Imperial” in the name. A Champagne fit for the kings!

The rooms are pretty, like those of a palace. We are probably thirsty after sharing and talking so much. We went to the private garden where the tasting will be prepared for us. Another staff came by with the bubbles and join us for the tasting. 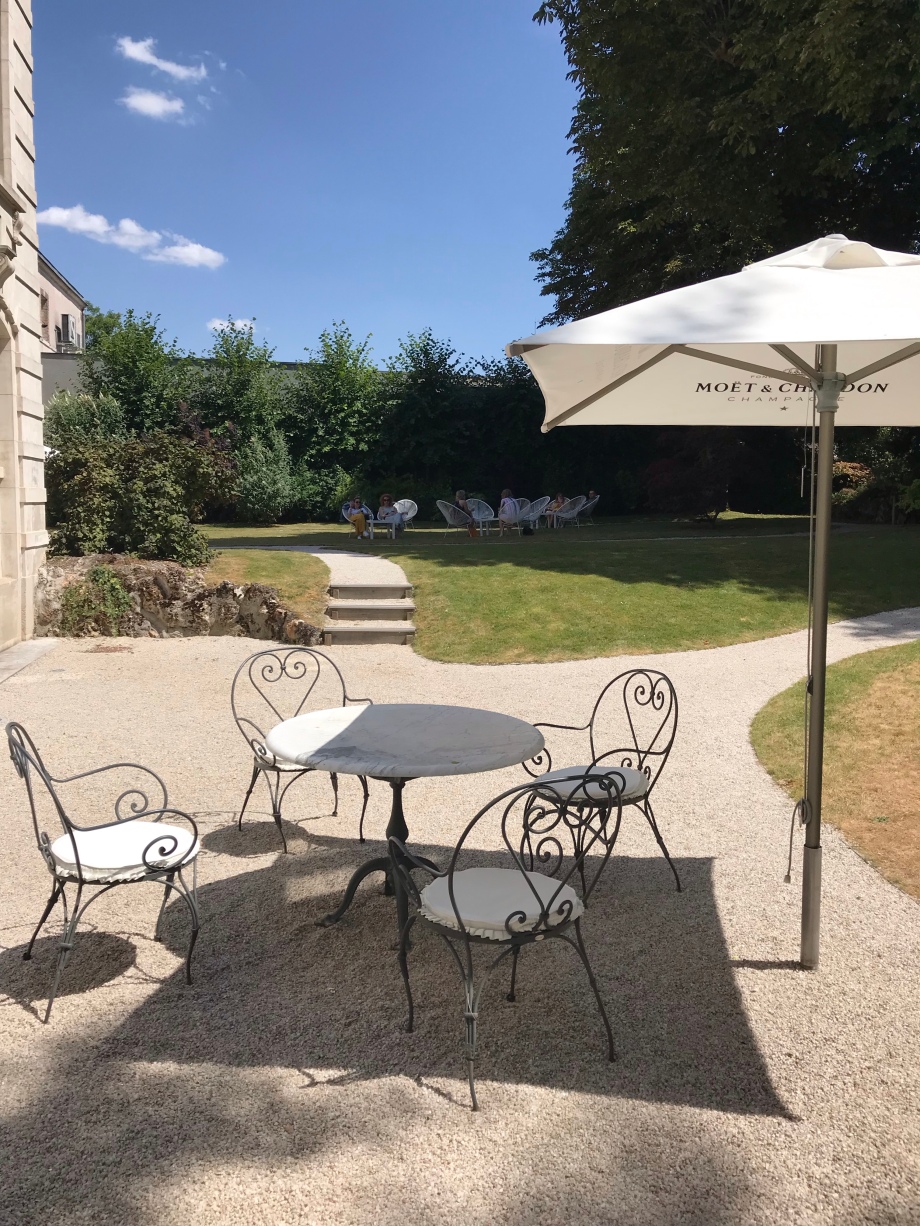 In the meanwhile we had a nice chat with Evan who shared with us about him and the job. Evan also joined us for a glass or two, what a good job he has. Free champagne anyone? The tasting was served with some water as well as snacks as well to clear our palate after each tasting.

We started with a bottle of Dom Perignon 2008 which is the current latest release. This is also known as the first expression, the “normal” P1. Aged for a min of 8 years on the lees. It is best served at 10-12 degrees. Another unique point of this 2008 vintage is it the first release after a change of Cellar Masters. You can see that it is a lighter in color and very crisp as well as refreshing. Fruity with notes of apples and lemon as well as flowery notes. I can feel what Evan mean by the harmony. It is one of the best vintage in recent times. This is a bottle of champagne that goes for around 300 SGD!

Then for the cream of the crop, we taste the P2 2000 Vintage next. This exclusive bottle is aged for a min of 16 years in the cellar. It represent the second period of maturity. You can tell by the color and the depth of the wine. It is much darker than the first one that we tried. It is much heavier, deep and complex. Definitely delicious. I can’t help by having a second glass of it. A bottle of the P2 2000 goes from around 750 SGD in Singapore and 370 euros at the champagne house. The P3 is very exclusive and even not available at the house currently.

Even shown us to the boutique and we bid farewell over there. I really enjoy this excellent tour of Dom Perignon. It have a very different feel to the family owned Taittinger that I visited earlier. It is also interesting to know about the unique part towards the creation of a Dom Perignon. While the tour is not for everyone since it is rather pricey, avid fans will still certainly go ahead. The cellar caves are the longest in the world. I am very thankful to Joelle as well as Dom Perignon for the invite. As well as Evan for the kind sharing. The whole tour took about 2 to 3 hours, we certainly took our time and laid back with glasses of champagne. If anyone is willing to share a glass of P2 and P3, please hit me up!