Although not bearing any Michelin Stars, Shin Yeh is one of the most try while you are in Taiwan. They are a local brand that is famed for serving up traditional Taiwanese Cuisine. It is a household name right over there. There are numerous outlet of Shin Yeh located throughout the island and in Taipei itself, however the most famous well-known one got to be the Taipei 101 outlet since it is located right up 85th Floor. This is definitely one of the highest restaurant that you can dine at in the world. At first, I was weighing up the options of whether to visit the Taipei 101 observation deck, seemingly since I am a first time visitor to Taipei. Pondering over it, I was thinking, rather than spending 600 TWD per person for a ticket up to the deck, I might as well just spend that on a meal itself. There comes Shin Yeh in mind.

Instead of just spending like an hour walking around the observation deck and paying 600 TWD, I choose to sat for a fine dining right by the window, enjoying my food and tea with a view 85th floor from the ground. Reservations are considered easy enough, especially since the restaurant was that huge. 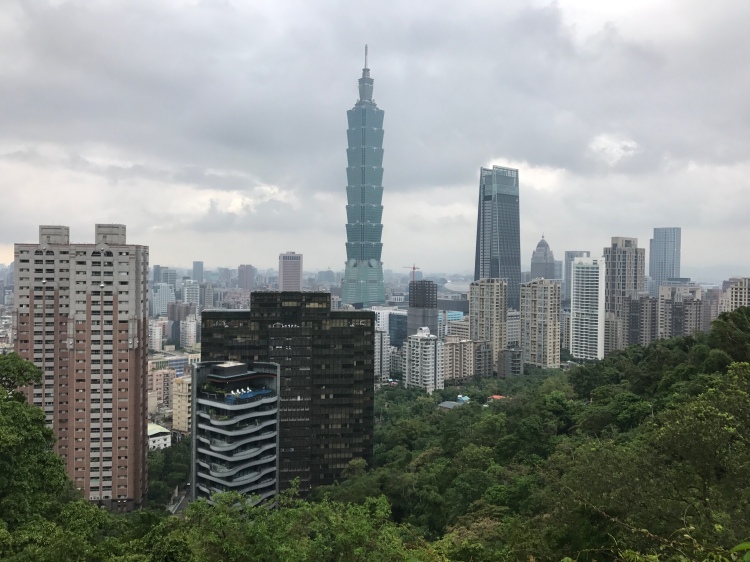 However, with that being said, the place is actually popular and not just a gimmick since when I was there, many of the locals were having their family lunch. I still recommend reservations to be made, especially if you are trying to score for a window table. In fact, I think for the most of us, the tourists, you should only go for a window table. Reservations was easy enough, you can make a booking online and within hours, the restaurants will contact you back. Shin Yeh do install a min spending per pax, which is 1080 TWD for non window seat and 1800 TWD for window seat. Even if you go for the non window seat, you will still have an amazing view and certainly you can get some photos taken. 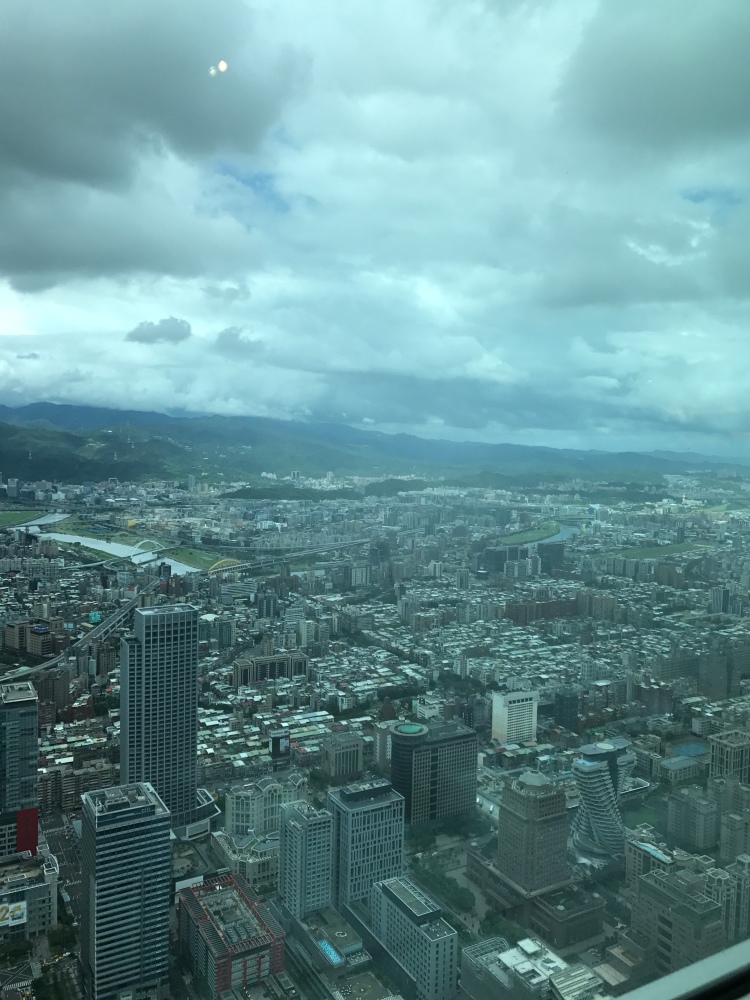 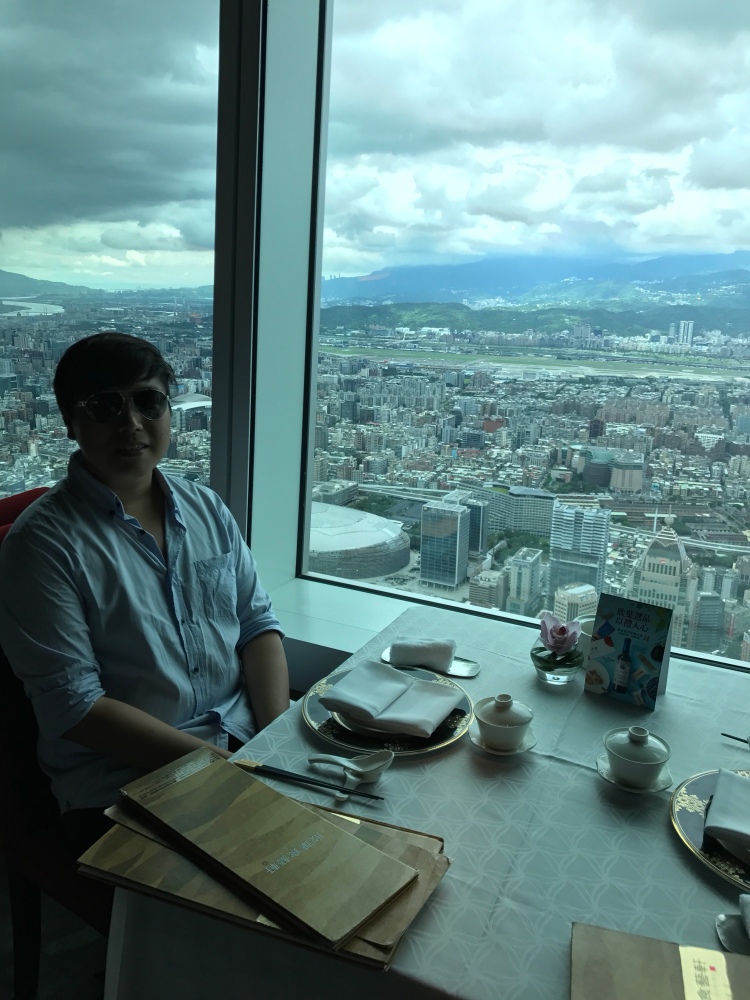 I made a Sunday lunch reservations and it was sure each to get to the Taipei 101 via the MRT, just bear in mind to head for the main office lobby instead of the mall. There you can find the reception where you reservation will be checked and then you will escorted to the express lift. It does feels very exclusive and private. You do reach in mins in those express lifts that makes your ear goes pop. We were then shown to our window table that just look far into the city and even the hills nearby. It is amazing. We quickly took some pictures as the weather was still clear! 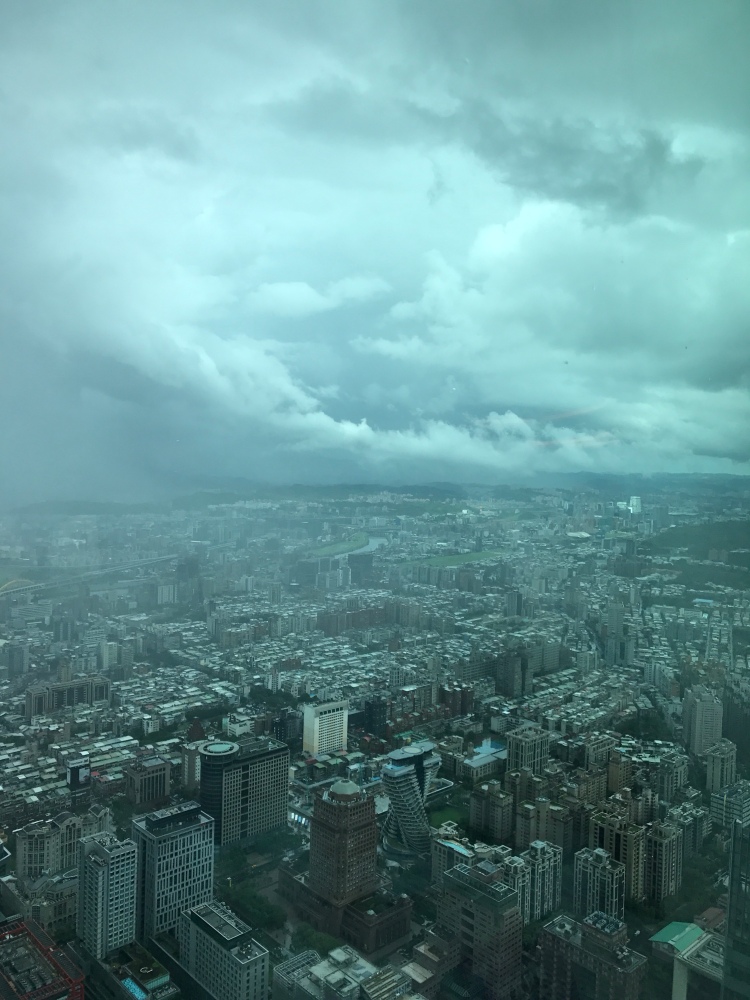 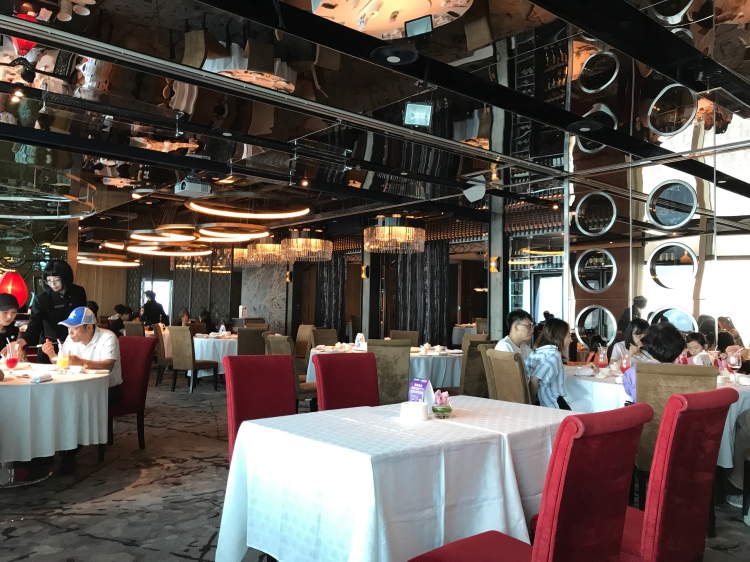 There was a ton of menus, including different options of set lunch. Here are the menu as shown. 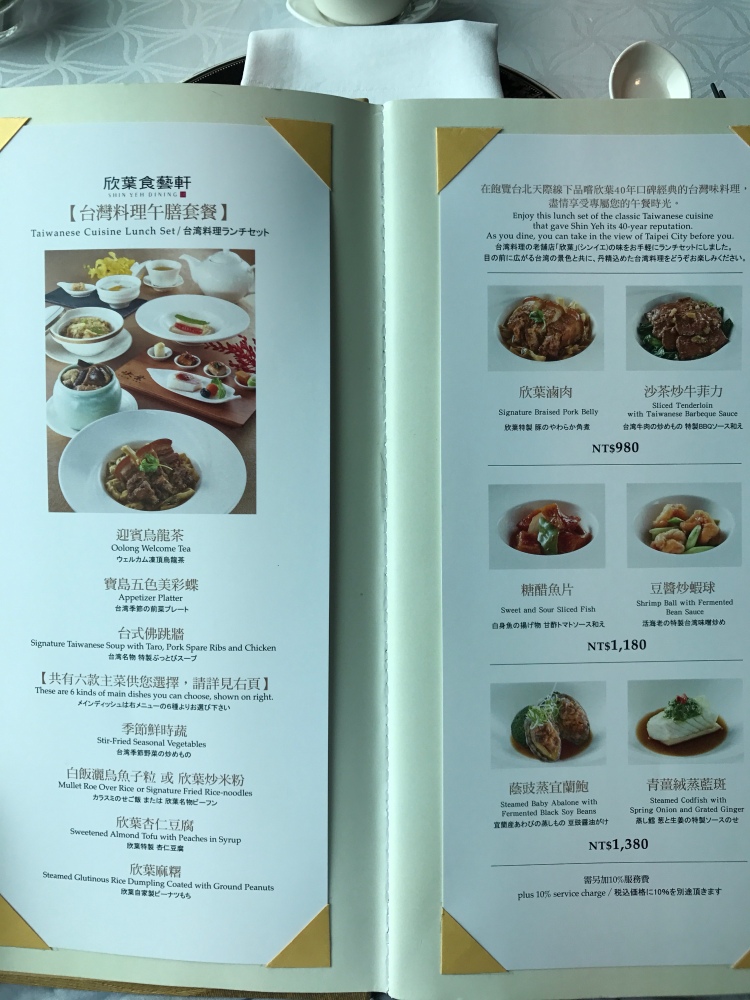 We instead went for the 1800 TWD 8 course Formosa Set Meal and then made up the rest of the min spending with orders from the alacarte menu. Specifically we order the Fried King Prawn Coated with Puffed Rice and Chicken Wings that seem so special. This dish cost 880 TWD. Then we also got the Garlic Fried Pomfret since we were craving for some fish. This came in at 1200 TWD. We got a pot of tea to share.

While waiting for the food, we took the opportunity to get some more pictures. I have to say that the restaurant was super grand and spacious. The service of the staff was also friendly and courteous. 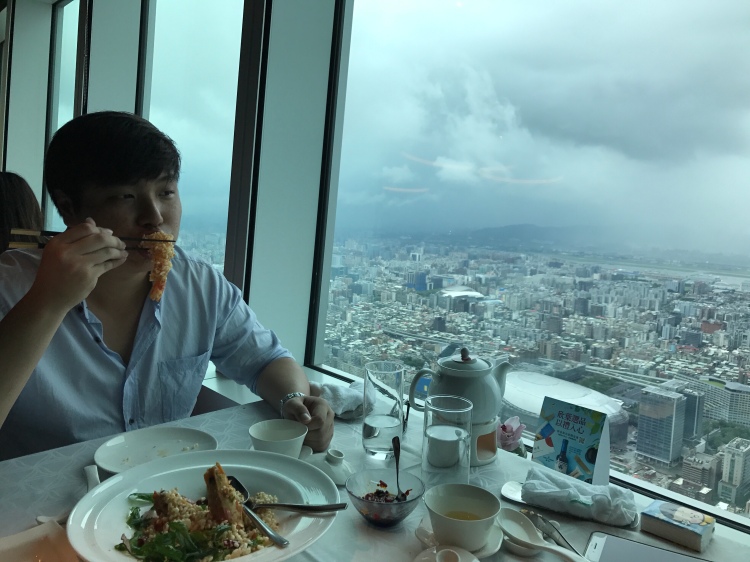 Here are the pictures of the Set Menu. I shall not go into all of the dishes but what really caught my taste buds was the appetizer which is really special. It is so unique and exquisite. Very simple and fresh. 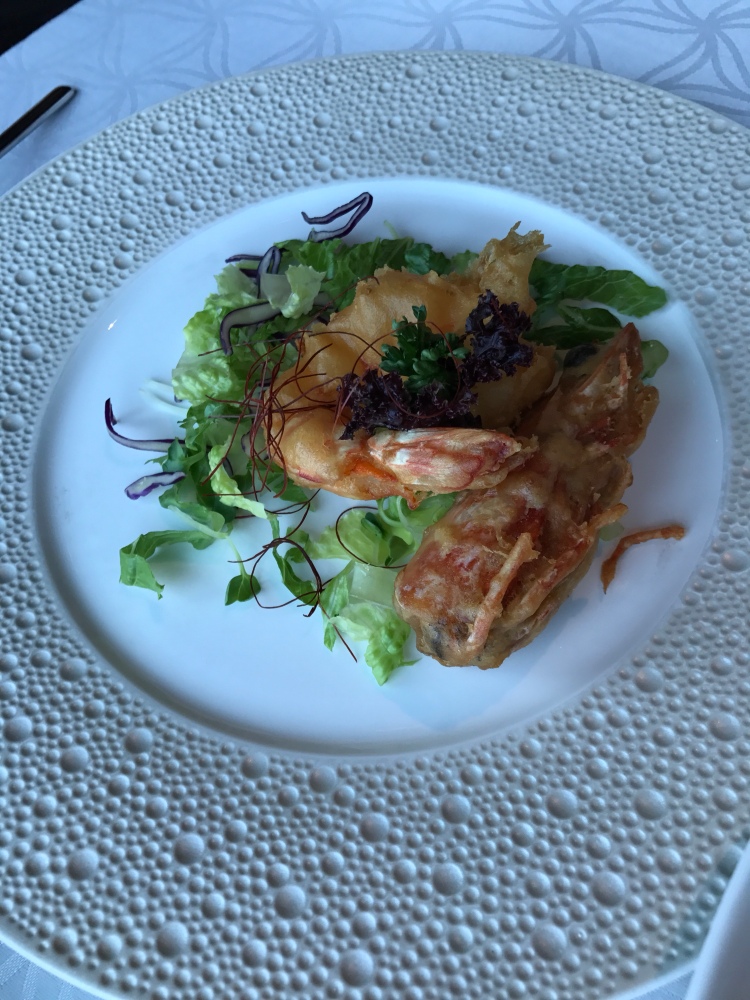 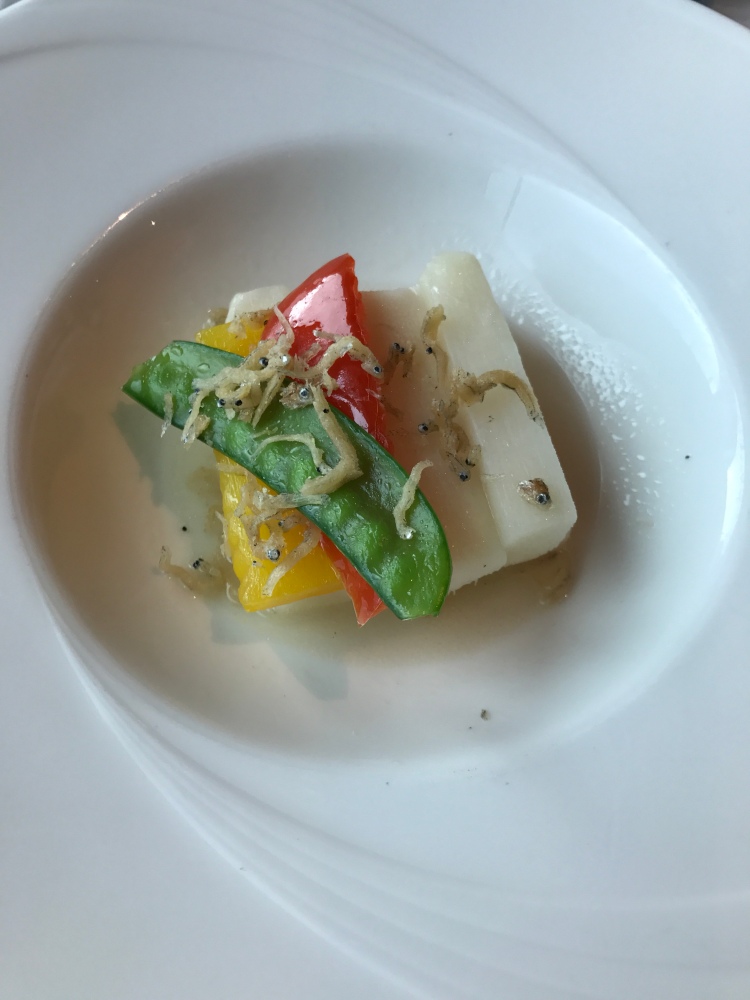 I was also amazed by the Abalone Soup with Sea Cucumber, Pork Ribs and Chicken. The soup was so clear and flavourful. It is certainly one of the best I had in my life. Soup was clear, an indication that it was boiled with slow fire with time. 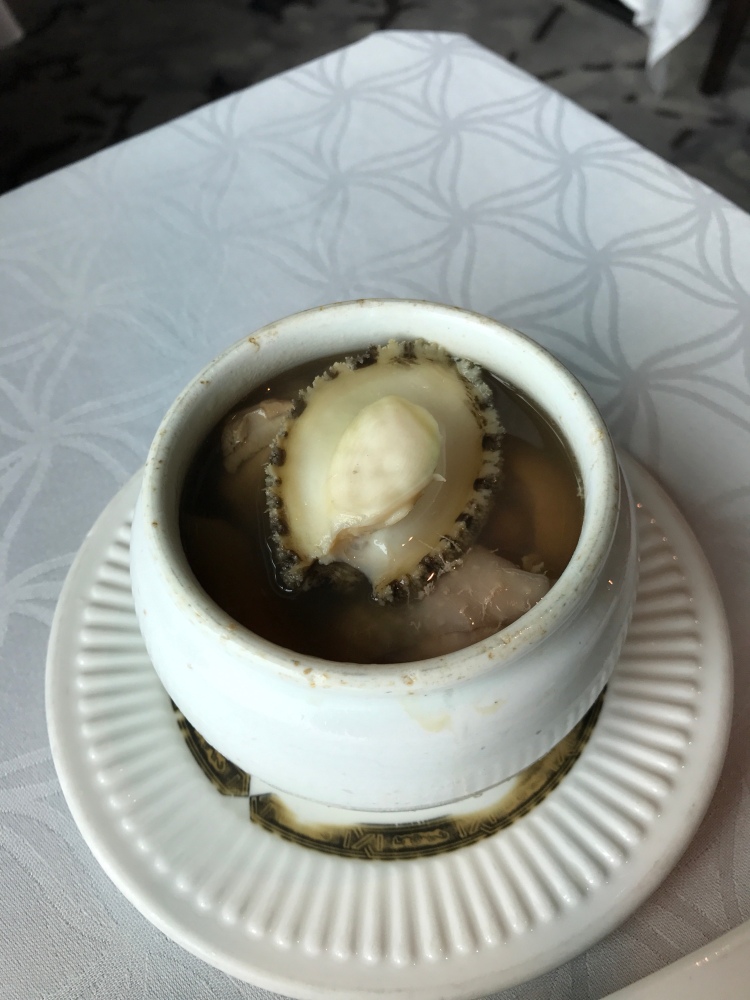 Similarly goes was the Taro Rice Noodle Soup with is so good. This is one of the well-known Taiwanese dish and it is so special. I love the stock and the taro. Loving how simple and yet awesome they are.

Both of the alacarte dishes that I had been awesome. The Pomfret was good and delicious.  I love that it is very well seasoned and fried. They had a crispy crust and yet the meat was tender inside. It is not fried till it is all dried. However what was even more amazing was the fried garlic slices that came with it. Together with a pinch of lemon juice before serving. You get that sour salty taste. I love it. Pricy, but delicious. The dish goes so well with that homemade chilli padi dip that you have to get from them.

The other dish was the Puffed Rice coated prawns and chicken wing. In comparison to the fish, this is more disappointing. At the very least the prawns was fresh and huge, the idea was also very novel. Perhaps at this point, we were too full. I felt like it was a good take on cereal prawns. Perhaps a healthier version.

Lastly, the meal finish with some traditional sweet soup and also fruits, they were unmemorable in comparison to the rest of the meal.

To sum it up, it was perhaps the best meal I had in the whole of my trip, certainly worth every cent. I think that Taiwanese cuisine pride on simple cooking, nothing too fussy, with using fresh ingredients being the key point. The view was amazing and the food is good. I am glad that we order a set meal and then supplement it with some dishes from the alacarte menu. It did allow us to meet the min spending and then also tried a number of their dishes. Personally, I am not a fan of min spending since they all so much constraint, you got to meet it and then you choose to order stuff that barely meet it since you do not want to over spend. Budget about 100 SGD per person. I was surprised by the number of people dining here.