Yeah, Yeah, Im’ma up at Brooklyn, now I’m down in Tribeca

Right next to DeNiro, But I’ll be hood forever

I’m the new Sinatra, and since I made it here

I can make it anywhere, yeah they love me everywhere

I used to cop in Harlem, all of my dominicanos

Right there up on Broadway, brought me back to that McDonald’s

I guess New York City is everyone dream, it used to be the place and the symbol for freedom and independence and it is right now still a place for anyone to express your views and ideas without fear. New York City, the Big Apple is definitely one of the most culturally diverse place that I have ever been, it is nice to see how people from all places and different background coming together in this community. I guess I can finally say that I have been in NEW YORK CITY! However, this is also one of the most touristy place in the world, and, it is definitely not a cheap place to travel! New York City actually consists of 5 main borough, Manhattan, Brooklyn, Bronx, Queens and Staten Island. Personally I guess most of the people would want to stay in Manhattan or Brooklyn. Although everywhere is well connected by the Subway, which is also the best way to get around town. I choose Manhattan since it was close to the action and then of course it is also nearer to everywhere in town. I was with my parents so cutting down on the travels is much better. I chance upon The Westin New York Grand Central which is right smack in 42 St, near the Grand Central Station!

I have actually booked the hotel a while back prior to my trip. It is definitely not cheap but for that location, I think the price is okay. We got a double queen room which was good for the three of us. The cost was about 300 SGD per night and I stayed a total of 6 nights. I used the complimentary 4th night free benefit from the Citi Prestige Card and that brought down the total cost to 1539 SGD, that is around 256 SGD per night which I would say is not too bad for a hotel right in midtown! I was there around 1pm, the hotel was crowded and traffic was always bad in Manhattan! The hotel was definitely bustling, very packed and crowded. Our room was also not ready yet! We did however completed the check in and will be back later later.

I would say that the hotel, although being a Westin aren’t as fancy as it sounds, or perhaps this is the standard in this part of the world. To me it felt like a basic 4 star hotel. I will share with you a little more later on as to why I think like this also. Our room was ready after we were back and the staff sort of sprang on us that we will need to pay a 25 USD per night of “Destination Fee”. This was not known to us at the point of booking and frankely only started recently. If I had known of it, I will definitely factor that in to my decision when booking. Although right now it is not like we had a choice or anything. This has actually become the thing now for most hotels in New York City, hotels are actually just making use of this to squeeze more income. For example, here, the destination fee includes:

Frankly speaking it will only be worthwhile if you use everything, but which tourist will do so. Reluctantly, we will just try to grab something from the lobby bar everyday to use the F&B credit so that we will not just waste it. I will share on this later on. 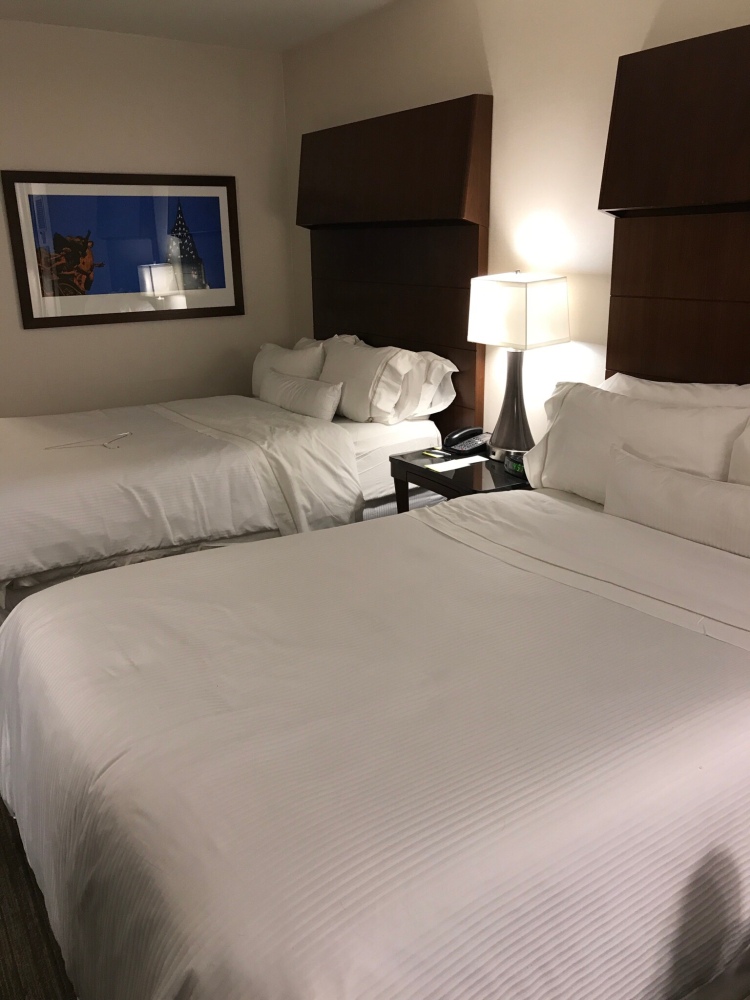 I would say that location wise, this hotel is awesome, it is right on the fringe of Grand Central, easy access to the Subway and practically walking distance to anywhere in Manhattan. Times Square is a couple of avenue away and roughly 10 mins on foot. The ride from JFK took about 40 mins. Mcdonalds is a street away and a supermarket is a couple streets down. There is also a shake shack nearby as well.

The room that we had was of a good size, especially how I have heard about how hotels rooms in the city were tiny. After all, NYC property prices are skyrocketing. Our room was on the 8 floor and the walkway looks fresh, that is a welcoming point of the place, everything doesn’t look too old. There isn’t much of a view in this part of the town anyway since you are probably going to be just looking at the person in the skyscraper across the road.

Immediately after entering, the wardrobe is on the right while on the left was the toilet. Then there is a huge mini bar and tv console area that was linked together to the desk alone the wall. 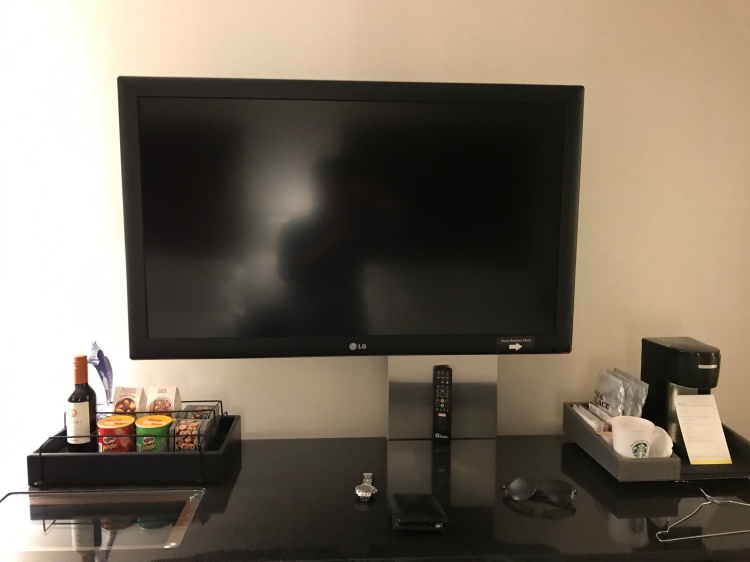 There was a huge flat screen tv on the wall which was high definition. I love watching american tv channels. Then opposite it was the two plush queen bed. I feel that the size of the room was ok. Along the window then was a coffee table and two sofa arm chairs. The best part of the room got to be the bed. It was plush comfy and lush. I love americans bed. The Westin Heavenly bed sure doesn’t disappointed. The bed was higher than what we asians are used to as well so that is something special nice that I find. 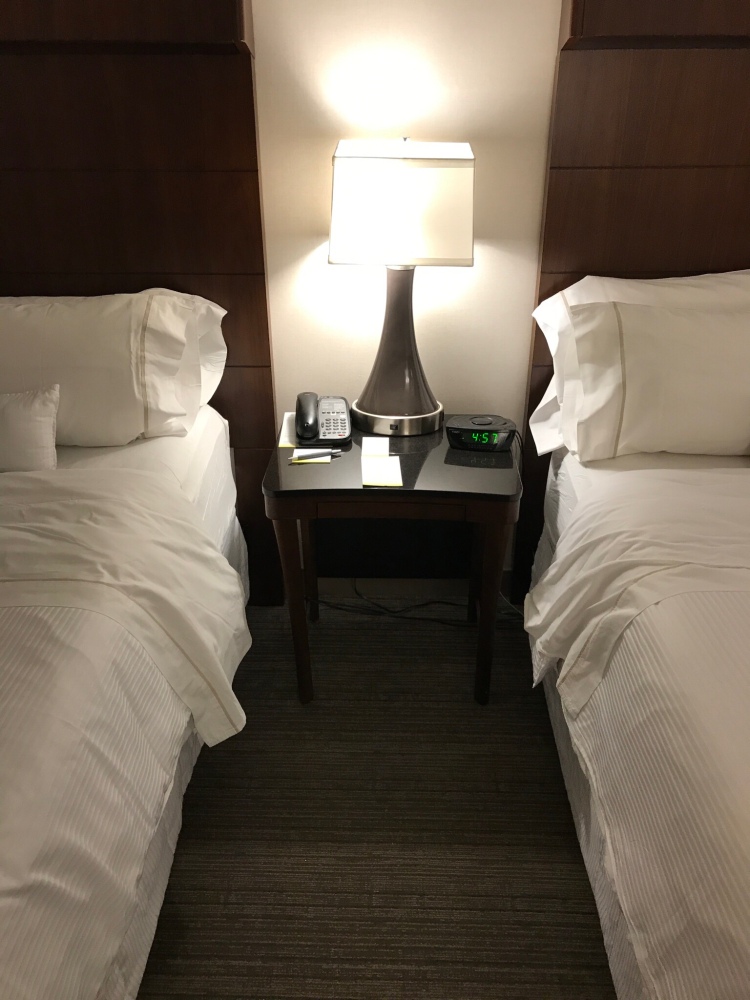 The wifi was fast and the room also had power sockets that was well appointed. I love that they are considerate enough to think of this point. There were plugs right on the side table between the two beds. Next come to the bathroom. This is the most underwhelm place of the whole room and it is also the point why I think the hotel really have to improve on. For a Westin and a luxurious hotel, I am able to find used soaps, half filled open bottles in the toilet? Clearly the staff missed it! How disgusting to get a room when you realise that the room is not fully cleaned after the previous guest? Yucks! After staying in quite a bit of hotels, this is still the first time that I have encounter such incident! On the bright side, the bathroom was of a good size and the water pressure was awesome. It also had a rainforest shower head which is nice!

Overall, it just felt like a solid 4 star hotel. At almost 250 SGD, it is definitely not on the cheap side. If you throw in the destination fee it is close to 300 bucks! I can’t really blame the hotel for doing so since most of the other hotels in the area are doing it as well. Thankfully during check out, we mentioned it to the staff and told that it was pretty unfair, she then told us that actually since we booked it prior to the implementation, we actually do not have to pay it and opt out. So it was clearly a mistake by the staff checking us in. Thankfully the charges were waived! Will I return again? Probably not since I would rather try out some other hotels in the vicinity! Service was average and the staff could probably do something more on their standards!