Welcome to another series of my flying! This time around I am continuing my journey around the world and flying to the United States of America on Singapore Airlines in the Suites. The Frankfurt to New York City 5th Freedom route is definitely one of the best way to cross the atlantic. The 8 hours flight was definitely too fast! Especially when you are in the Suites. I am fortunate to be able to do this way. A slight disclaimer, I may have fall asleep for 3 to 4 hours or so on the flight as well. I was actually doing this leg of the journey as part of a single ticket that I first flew on back two months ago, where the first leg took me from Singapore to Frankfurt. All in all, I paid 120,000 Miles and about 400 SGD in tax, this is definitely the way to fly! 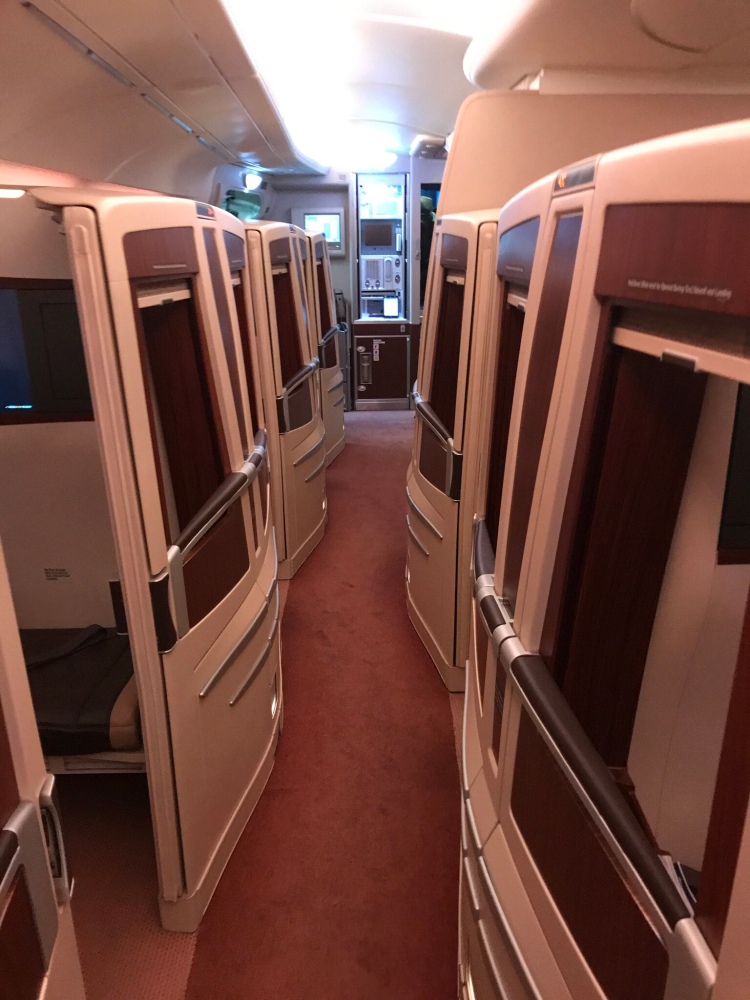 Despite it being not my first rodeo, I am still like a little kid that got so excited when flying! I guess the smile on my face was definitely one of the brightest the moment that I board the flight. Flying to the States require a little sort of interview or soemthing with their agents, where they will ask you qns like, did you pack your bag yourself, what are you doing there blah blah blah! Then they will sign off on your passport. So for the readers here, NEVER NEVER THROW AWAY THE STICKER THAT THEY PASTE ON YOUR PASSPORT! The ICE Police and TSA will look for it when you arrive in USA! 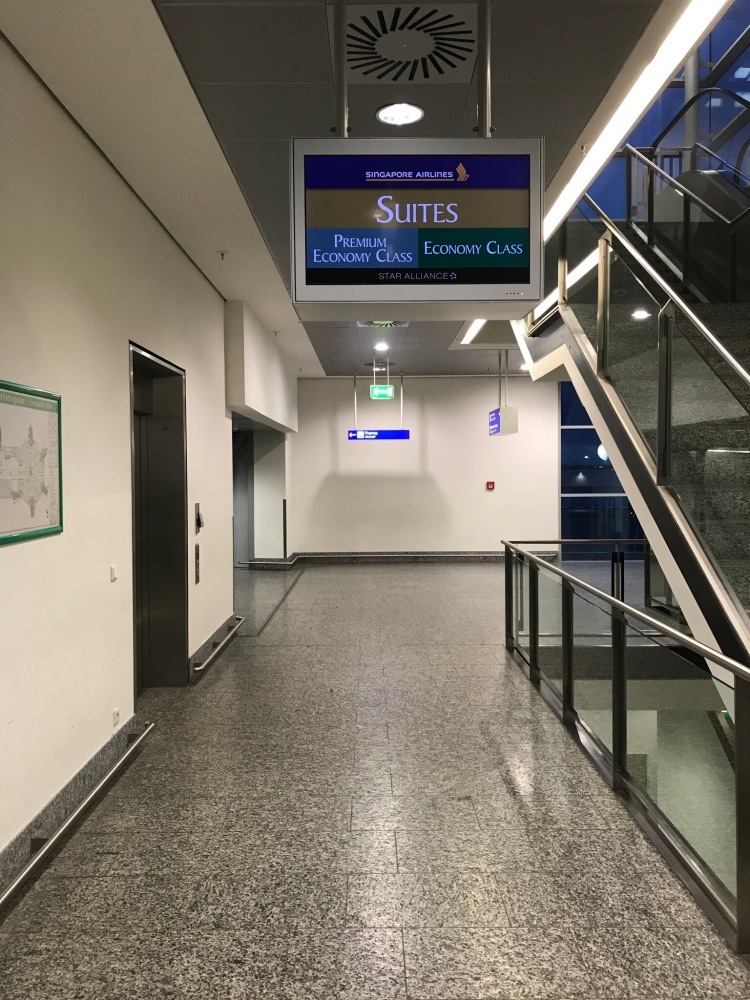 I was one of the first to board the aircraft when boarding started! It is surely nice to see your country airline livery after spending almost 2 months in Europe! It kind of make me a little homesick, seeing so many Singaporeans and as well as while interacting with the crew onboard this flight, SQ26 from Frankfurt to New York City! The Inflight Supervisor welcomed me onboard and escorted me to my suite, 4A. The two ranking crew, a leading stewardess and a chief stewardess who were working the Suites Cabin also extend their welcome. It was surely a delight to see them.

Surely, the standard way to start a flight onboard the suites in Singapore Airlines was definitely telling them Champagne when they say, Mr Wee, can I offer you a welcome drink? Surely, after that you get one of the best reply in an airplane! Krug or Dom Perignon! This got to be one of life greatest decision ever! My preference is actually towards the Krug! I love the intensity! Surely, it is never too early for a glass of Champagne even though it is only 8am in the morning right now!

More amenities were follow throughout the boarding process, newspaper and magazine were offered as well as pajamas and the amenity kit. I love the pajamas which would always be oversize, making it so nice for lazing. Get a small one! Even for a person of my size, M is still a little too large for me! Singapore Airlines offer a Salvatore Ferragamo amenity kit which is very awesome. There is wipes, lip balm and a whole size of cologne which is so great! I am still using the Cologne at this moment! Other amenities were provided in the restrooms. You really love the touches everywhere, the leather menu, the finishing. The Bose noise cancelling headphones, everything was well kept. Here are some photos of the cabin as well! 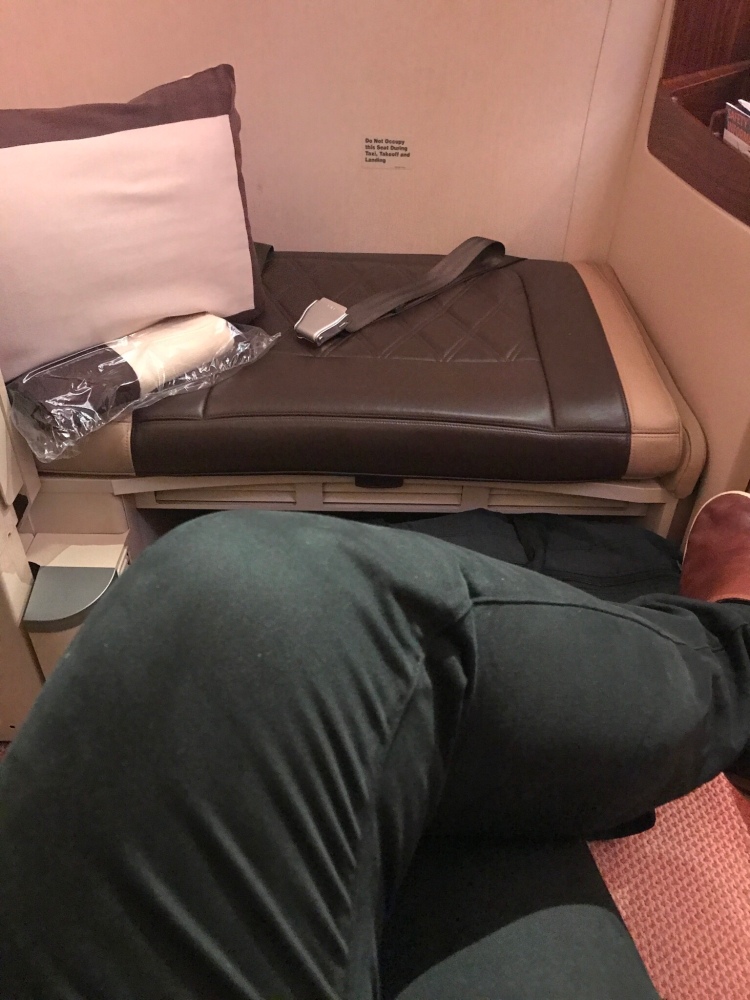 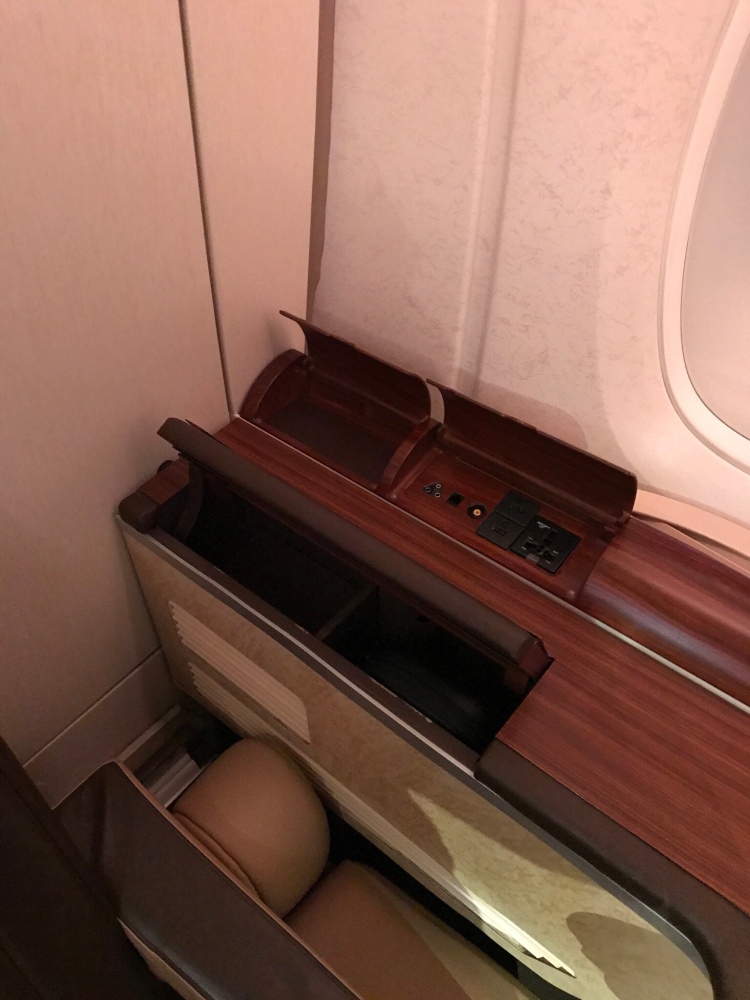 The stewardess kept my glass full throughout the boarding process and it even stayed with me when the plane was taking off! My meal orders were also taken, prior to the flight I have already use Book The Cook to choose my mains for the flight! The cabin crew confirmed that the order was confirm and ask for my preference for the after takeoff drink! Surely it was the first time I experienced sipping champagne when you are travelling at 300km/hr! I am really lucky to be travelling in style!

For those who are interested, here is the menu on the flight itself!

I actually realise something, after a while, the inflight entertainment didn’t actually turn out to be the best accompany for the flight at all! I would rather spend most of my time, playing around the cabin, gazing out of the much more interesting window, checking out the views rather than watching some videos that I could have just watch anywhere else! 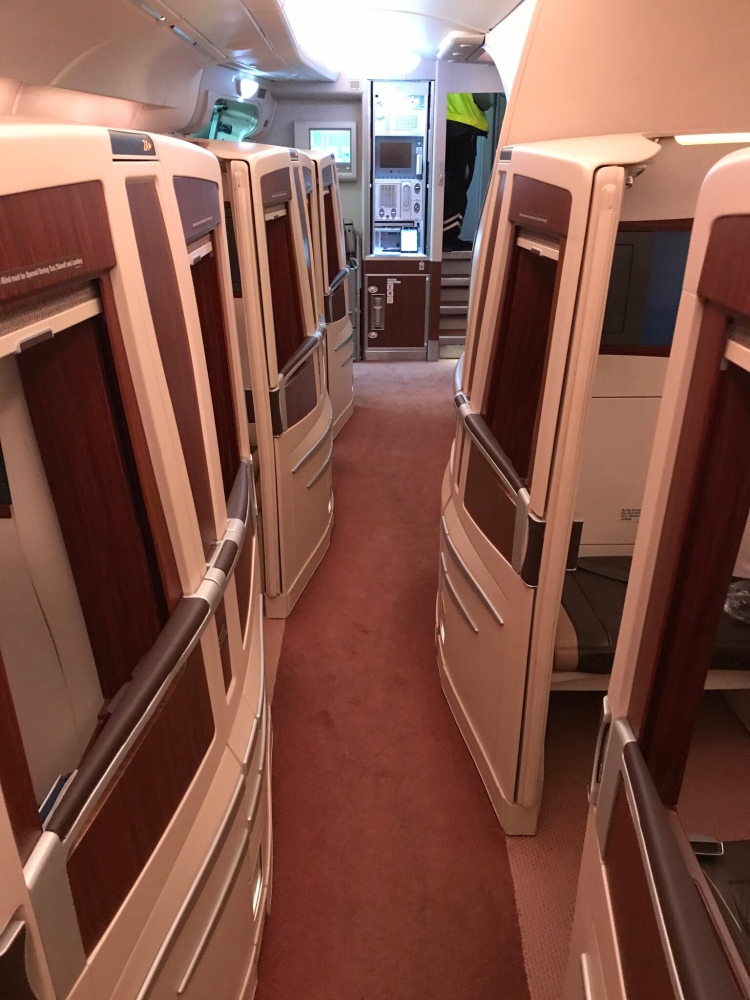 Upon leveling off and starting the journey, the crew also immediately started the service! I continue having my glass of champagne! This time around, I opt for the Dom Perignon instead, seriously! I couldn’t find a preference between the both of them! The leading stewardess kept my glass filled everything they pass by. It is surely a gem to see how polished their service are, the way the champagne is being poured is one of life’s greatest sight! 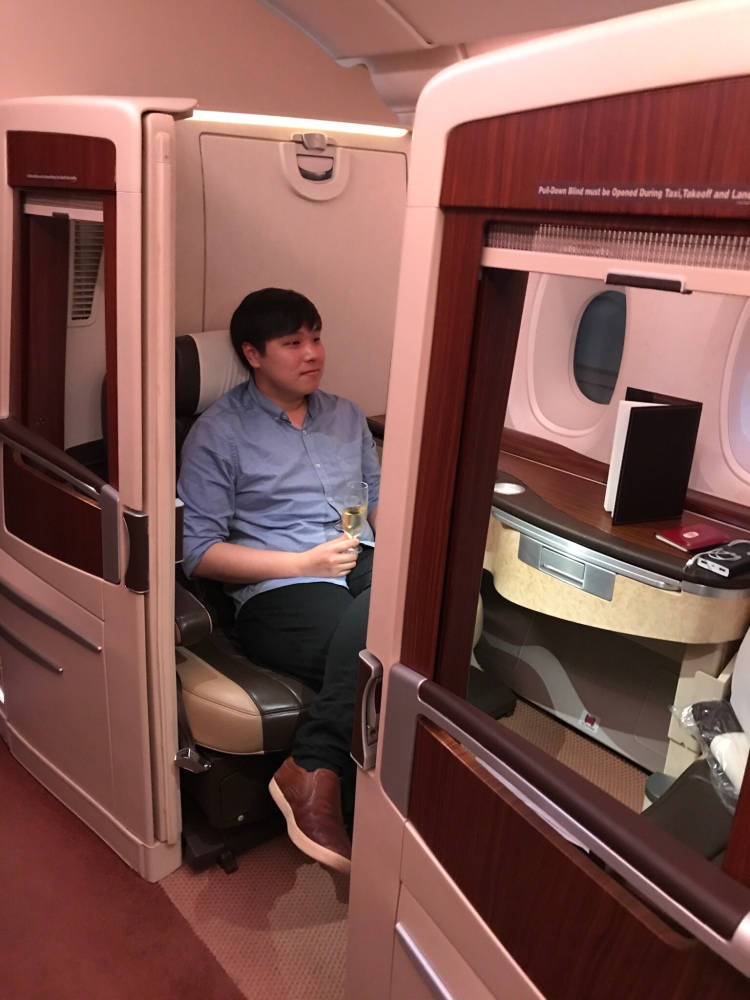 While you can dine anytime you want throughout the flight, I opt to dine right away to optimise the amount of time I could sleep on the flight since I was really shagged and tired after spending the night at the airport. I also took the opportunity to dine together with my parents. It had been a good 45 days since we ever did so together! What a way to break that by doing it in style and dine at 36,000 Ft in the air with champagne and fine dining. Both of the crew served us well and we also had a great chat with the chief! I would like to say that this Suites is so good for dining together, I sat at the ottoman opposite my mum seat and it was comfortable. The table was also big enough to dine together.

I got the fruit plate to start which was nicely decorated. Of course the champagne continue as well to keep thing hydrated. I paired my breakfast or brunch I would say with a fresh croissant as well!

Opting for something light, I choose the Halibut in Lime Sauce. It was served with fingerling potatoes and some spinach. The fish was pretty fresh and flaky, however it was pretty tasteless in all. I wish there was more of a sauce or something to cut off the blandless. I guess it was really hard to produce a good fish dish in the air!

While my dad had the salmon with rice. 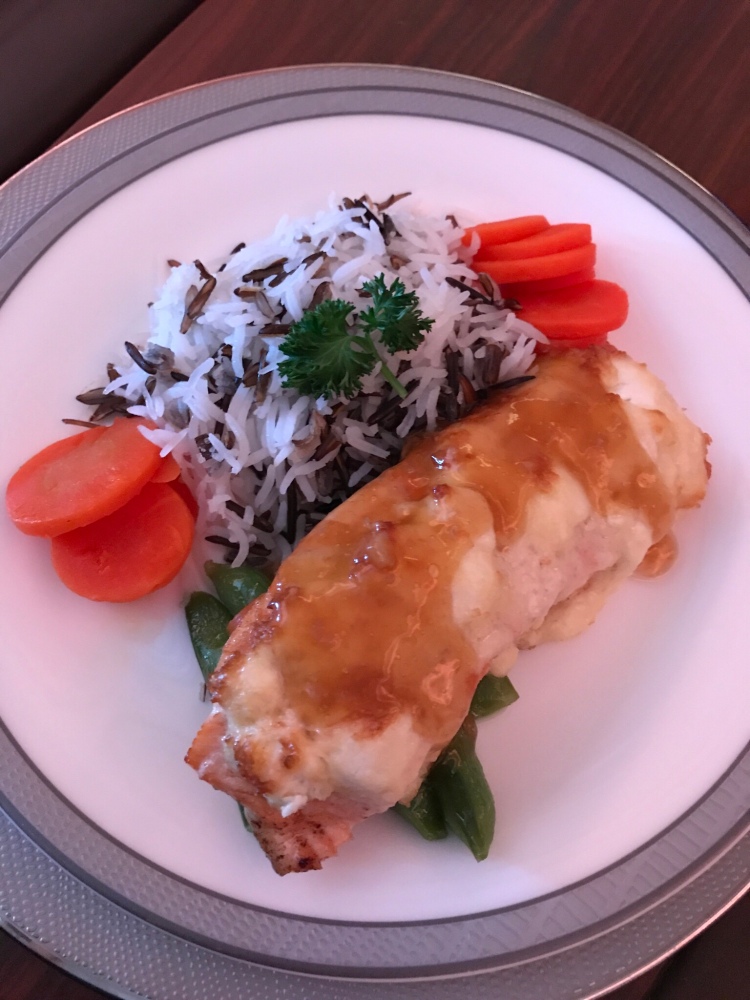 Something that I really have to commend for Singapore Airlines in the Suites was how they execute the dessert dishes onboard the aircraft, of the various dessert that I had onboard, each of them were so nicely presented and decorated. Definitely worthy for a michelin star. I had a little coconut dessert the last time around which was spectacular! Similarly, on this meal was a Bombe Chocolat Poivre, which was sort of a chocolate tart. It was a dark chocolate mousse that came with a nice almond biscuit and then with some berries on the side. The tart berries was a nice combination with the heavy chocolaty dessert.

I asked for the bed to be made immediately after the meal since I was dead tired, probably not the most healthy thing to do on earth but I would like to hit the ground running when in NYC. I changed into the pajames and then hop on to the bed. I have to say that the personal space is definitely one of the most spacious one there is out there. Some might complain that the bed is a little to firm for liking but to me, personally, I love hard surfaces! Row 4 might not be the best suites there since my preference is the Row 3 since you get 3 windows there, Row 4 turn out to be pretty not bad also. The seat was extremely private since it actually faces the wall and there is not much traffic there too! A 35 inch seat and a 23 inch huge tv. What a way to fly. Truly A Great Way To Fly. 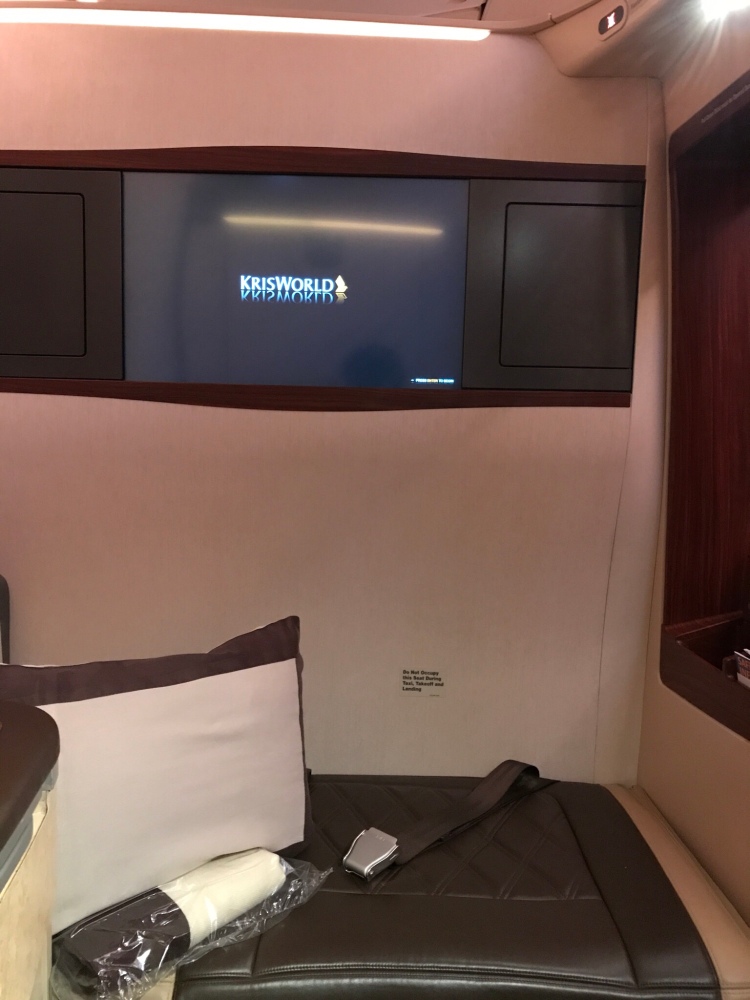 I got a good 3 hours of sleep and continue on lazing in the bed after waking up! What a good rest that is. The crew were like hawks. I had no ideas how they would know that I had woke up at all. I asked for a double blue mountain espresso which was definitely the way to do so! Having a sip of the coffee while gazing into the clouds, if only time could stop right now! I managed to catch up on a movie later on also.

Soon enough lunch was served and I asked for the bed to be made back to the seat. When you know you are having lunch in Singapore Airlines, there is only one thing that you should do, get the garlic bread! SQ garlic bread and satay are one of the most divine stuff onboard.

We start out the appetiser which turns out to be my favourite part of the meal. It was cold lobster medallion with puree of eggplant, capsicum. I love the sweetness of the lobster and the puree blend was so sweet and delicious. Check out how appetizing and vibrant the dish is! 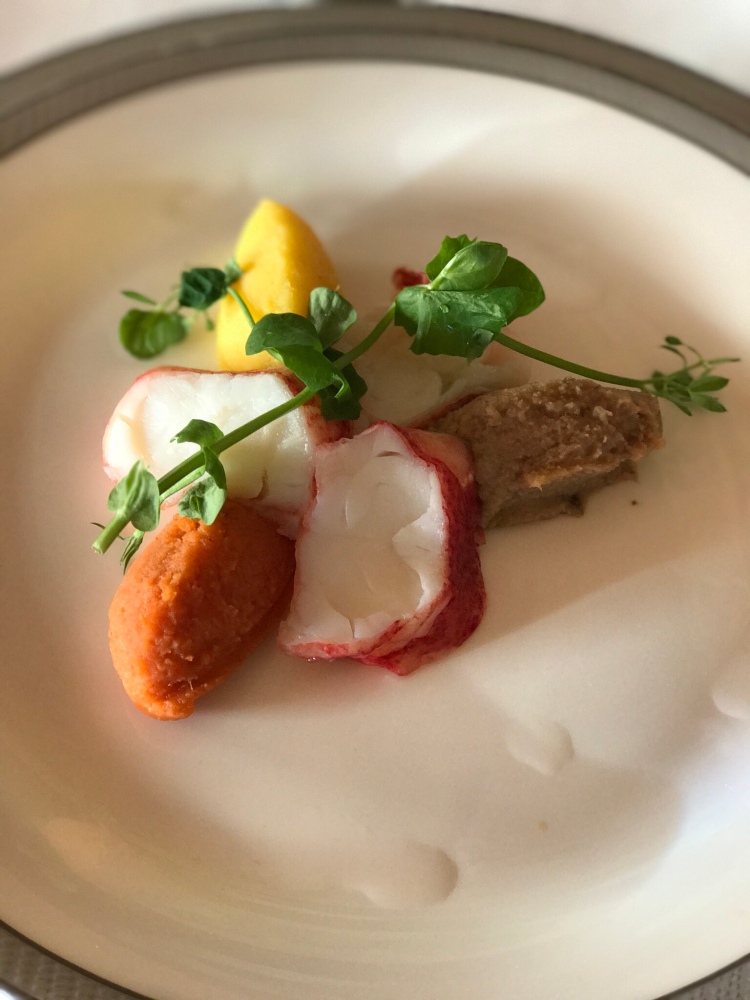 Then I had the Bresse Chicken with Morel Polenta, which was what I ordered. The dish was okay, it was pretty average although nothing spectacular to talk about! For a pre cooked dish, I would say that the chicken was pretty moist and I love that they had this mushroom like feeling between the skin and meat that add much flavour to it. Moreover the Polenta was surprising very good and creamy. Overall between this dish and the Halibut earlier, the chicken was so much better! 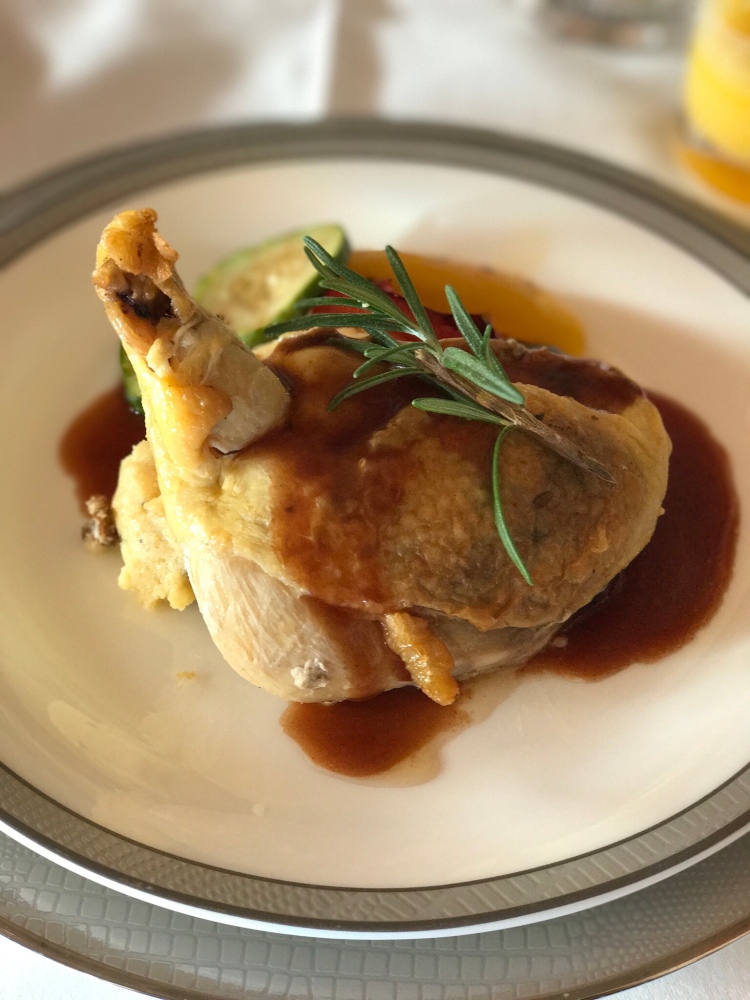 We ended off the meal with a little pancake, cake kind of dessert, out of all my dessert this was one of the underwhelming ones. It had piped cream on top then a little syringe that contain rum and vanilla. It was pretty fun squeezing all the syrup over the cake. Here is something to improve on! 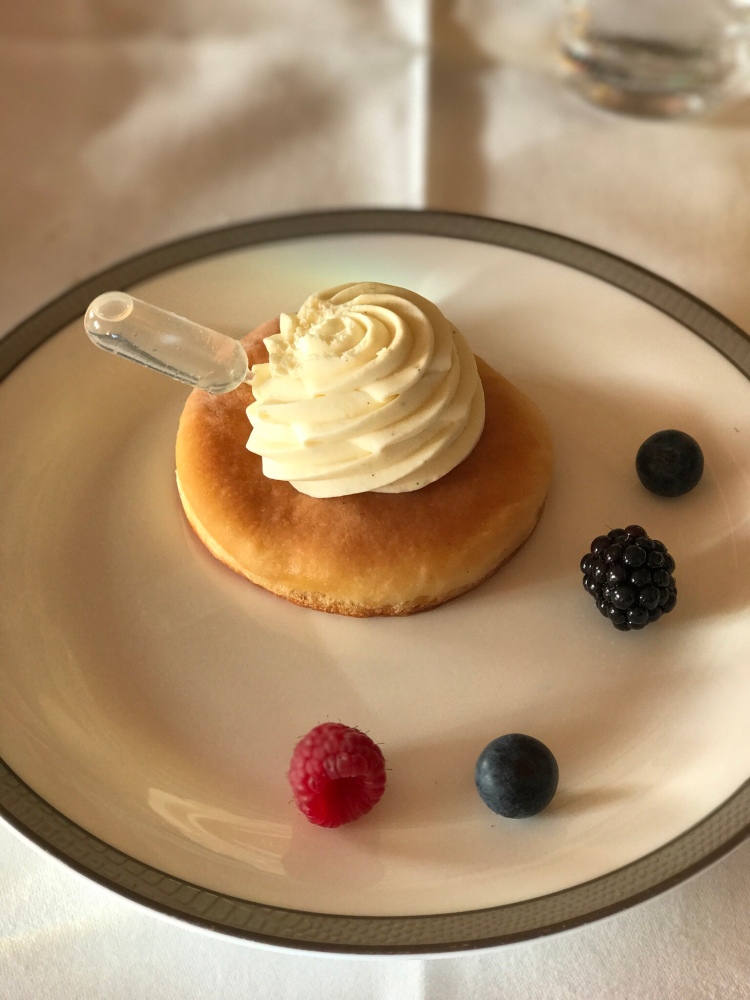 Surprisingly, very funny, the IFS leading the crew on this flight was Dennis who was pretty surprised and smiling when we exchange complementaries and I told him my name was Dennison. Prior to landing, we even had a great conversation that probably last close to 30 mins, talking about his job, my travels and as well as how he used to work in Raffles Class in the past. He is really attentive and polished, do give him a shout out when he is on your flight! 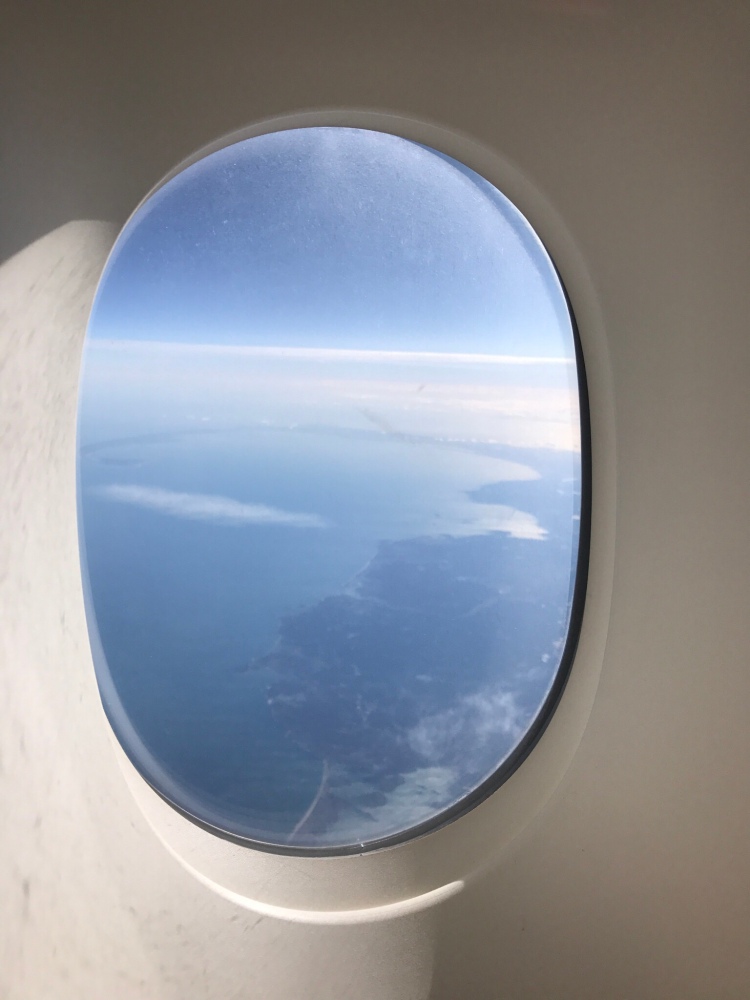 While awaiting for the jet bridge to be connected to the plane. I overheard this American lady which was also in the Suites. She exchange a few words with the crew and told them that she was actually connecting to head to Vegas. She choose to fly Singapore Airlines instead of some German or American Planes since the Suites was such a great way to fly! I was a little proud to hear that since others love my country product and will rather take the effort to do so instead of a much more easy way! Singapore Airlines and IFS Dennis! Well Done. It was surely a sad goodbye as we say our farewell to the crew! Hello New York City!