While I guess for most of the tourists, taking a plane is one of the most exciting part of the travelling. I still remember my younger times where I will frequently get so excited the night before and couldn’t fall asleep, simply because I am flying to Bangkok for a family trip. In the past, my family did not have much spending power and we will just take a trip to Bangkok or Kuala Lumpur. Travelling wasn’t that much of an easy thing way back. This plane ride surely doesn’t fall in that category. Boarding my flight to Paris, and then Frankfurt signify that my time in Europe have comes to an end! What lies in wait is Trip de Americae which is coming right up after I finished this series of Trip Reports. Continuing on where I left in the last post, I was flying out of Bologna airport which have planes just part on the tarmac, meters away from the gates. It is surely a delight to witness the beauty A320 right in front of me with the gigantic engines and the gorgeous Air France livery on it. 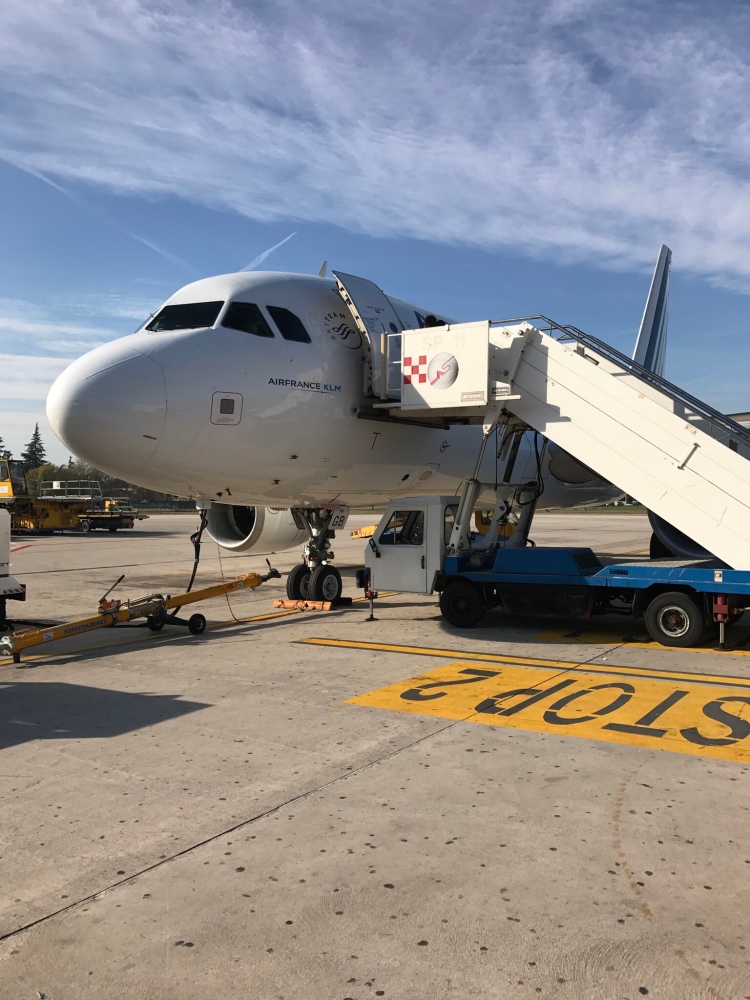 This was in fact my first flight on Air France. I have heard much stories on it. Be it one that was pretty humourous by my poly lecturer on how a flight attendant pluck open her eyelids while she was sleeping to double confirm if she wants breakfast. Rest assured, nothing of such things happen in this flight. To share a little, Of course it will be much ideal to flight direct to Frankfurt, however the cheapest flight I could find from Bologna would require a transfer in Paris with Air France. It turns out to be a delight during the transfer, which you will definitely find out later on. Everyones knows that the true delight on an Inter Europe Flights are the extra leg rooms seats, it even beats the Business Class. While I tried for on while checking in, they didn’t had any available although she inform me to check on board. 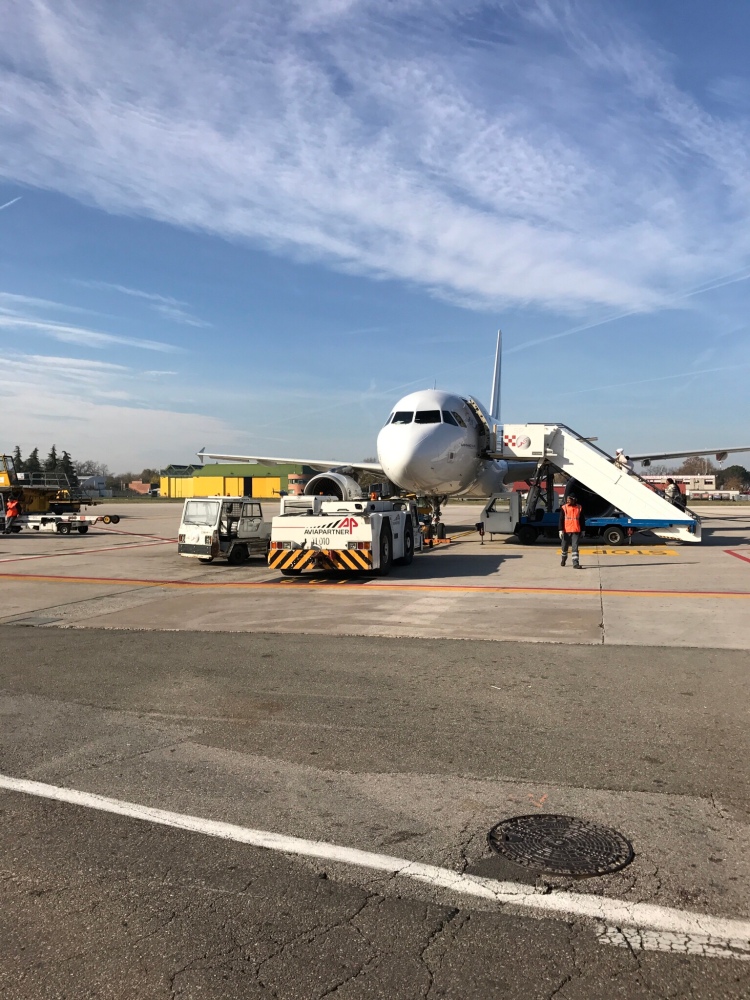 I boarded through the front stairs, the A320 is a single aisle plane and sure enough the flight was pretty packed. I went right to the back of the plane where one of the attendant was stationed. I simply just went all out and ask very politely if there is an extra leg room seat available. The lady was nice and say she would check, she pull up the seating on her ipad and told me that there is a middle seat available. Even though it was a middle seat which means you are sandwiched by two other person, I jump at the opportunity. This brings me up to another tip from Seeing The World In Steps. NEVER BE TOO ASHAMED TO ASK!

For those who are unsure with how flights are within Europe. Airlines are all on these slimline seats where the seats are thin and the cushion are negligible. Although the strategy said is to cater for more leg room, the real idea is to squeeze in more seats. The whole plane have the exact same seats, Business class are just separated by a curtain and leaving the middle seats empty. This is to allow customization depending on demand. So the true legends are the extra leg room seats. I would say that the seats are around 30% more spacious. Around 20 cm more of legroom. Really precious, even for a short flight of less than 2 hours.

I had a very smooth flight all the way to Paris. In the middle there is a snack and drink service, there was a pre packed bun being given, it had some cheese and ham in it. The other choice being a veg wrap. I also had an iced tea. Really kudos to them for having a service at the min. I think some airlines like British Air don’t even provide a snack anymore. I arrived at Terminal 2G which is far from Terminal 1. I had a long layover of 7 hours. Which I spend doing up my tax refund at terminal 1 and then head to the Star Alliance First Class Lounge. Stay tuned for how I managed to get on with that. 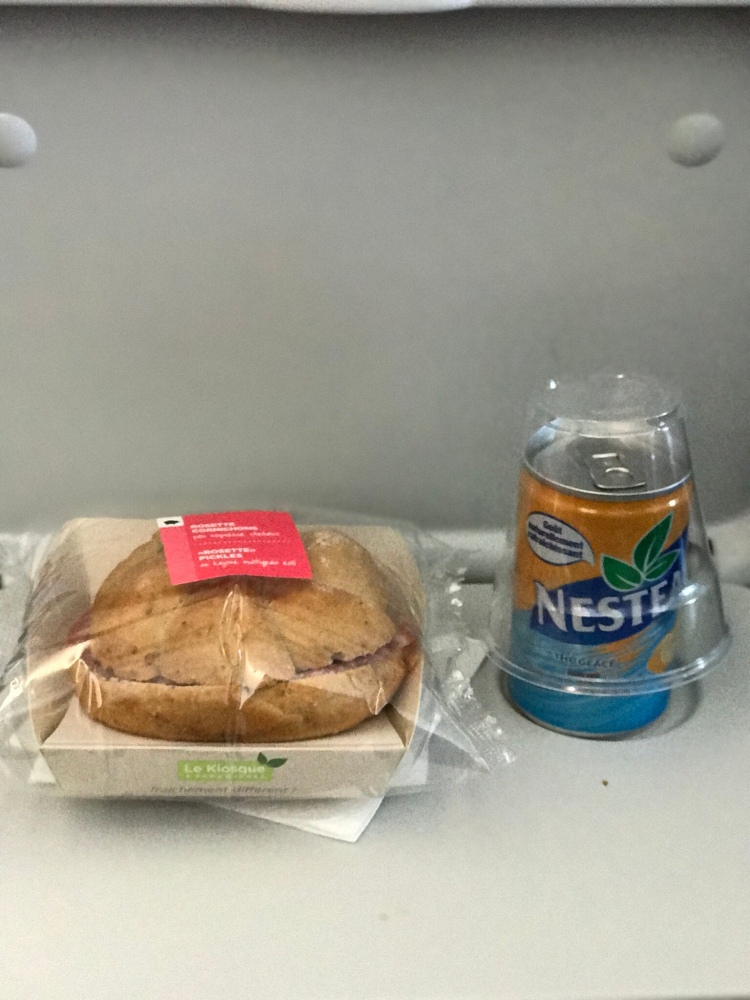 The 7 hours actually pass by pretty fast and I made the long journey back to Terminal 2G again for my next flight to Frankfurt. I had some fast track card from SQ, more on it later, which allows me to pass by security in no time. There was no queue at all in that line, thankfully.

The flight was actually departing at a remote stand and the bus ride must have been at least 20 mins. I get it that the airport was huge, but being packed in like sardines and driven for like I could have gotten to London was no joke. It is kind of embarrassing that Air France could not get an actual gate at their hub? That is crap. Sadly this time I failed to get an extra leg room seats on board since the flight was full. Everything was the same like the earlier flight so I shall not share much more. For comparison, this is the leg space I had in a normal seat. What a stark difference!

I still managed to survive it and landed in Frankfurt just past 10pm. I am all ready to hobo in the airport till 5am when I can check in for my flight to New York City in SQ Suites. So stay tuned for my experience in that!