What are your chances of meeting your friend at a place 3000 over miles away from home? Despite my little humble achievement of having travelled to 19 country and many more cities. I have never ever met any of my friends overseas till this trip. It definitely did hype up my Melbourne trip when I realise that one of my friend from poly would be there in town as the same time as me! I am really shocked and surprised but super excited too! That must be some luck though, same city, same airline, same flight number! Just short by a day, me arriving earlier and her coming back later. While another friend of mine, whom, wait for it, wait for it, whom I have not seen for a decade! Heard that I would be travelling to Melbourne, we immediately agreed to meet up! Such an awesome city for a little catch up right ?

I would first share a little on my meet up with this great buddy of mine, Roy! We both agreed that, come to think of it, I have not seen him since he decided to migrate to Melbourne back when I am in Primary 5, close to a decade, 10 years, I really can’t believe myself. It means that we are going to have a ton to catch up! At first I was slightly afraid that it might be a little awkward since it had been such a long time. We managed to match our time and next up, I got a nice sporty BMW SUV waiting for me at the lobby. Pretty Cool right! According to my friend, probably most of the locals have a car and in a family like for him, both his parents and him all got their own car. Yep, throughout the night, besides catching up on each of our lives back home we also talk about cars and definitely COE. Cars are such a great convo starter with people living abroad. Just something to share, A Porsche Cayman cost 160 thousand only in Australia! Yep Only! He first brought me to a nice little chic restaurant for dinner. I have asked him to surprise me and also promise I can definitely blog about it!

We went over to the docklands! Docklands are meant to be a new generation of development by the government to ease the congestion and hype up a new city centre area for the people. There are many new buildings, tons of new condos around the waterfront. However it is not really successful and most are empty. This area is also quite quiet a little too creepy at night for my liking. Although I did quite love the chic and peaceful vibes at night in contrast. Docklands are a little off from the CBD area, so I am pretty glad Roy brought me here! If not I won’t had the chance to see it! This area is just like a super quiet Clark Quay in Singapore! We went to a restaurant along the water area called Berth! We both decide on Pasta, the food was okay but chilling with Roy and catching up was awesome.

Following on, since we couldn’t do drinks, coffee it is and Roy had a great location in mind. Roy actually stays in the suburbs, roughly a 30 min drive from the CBD, he is currently doing his bachelor in University of Melbourne, currently interning for a biz consulting firm too. Comparing, I’m still stuck in NS. We went to the Italian Street and it is absolutely vibrant. The great cafe that we are headed to, Brunetti, was absolutely crowded! I was quite amaze since even in the CBD area, at night was pretty quiet. 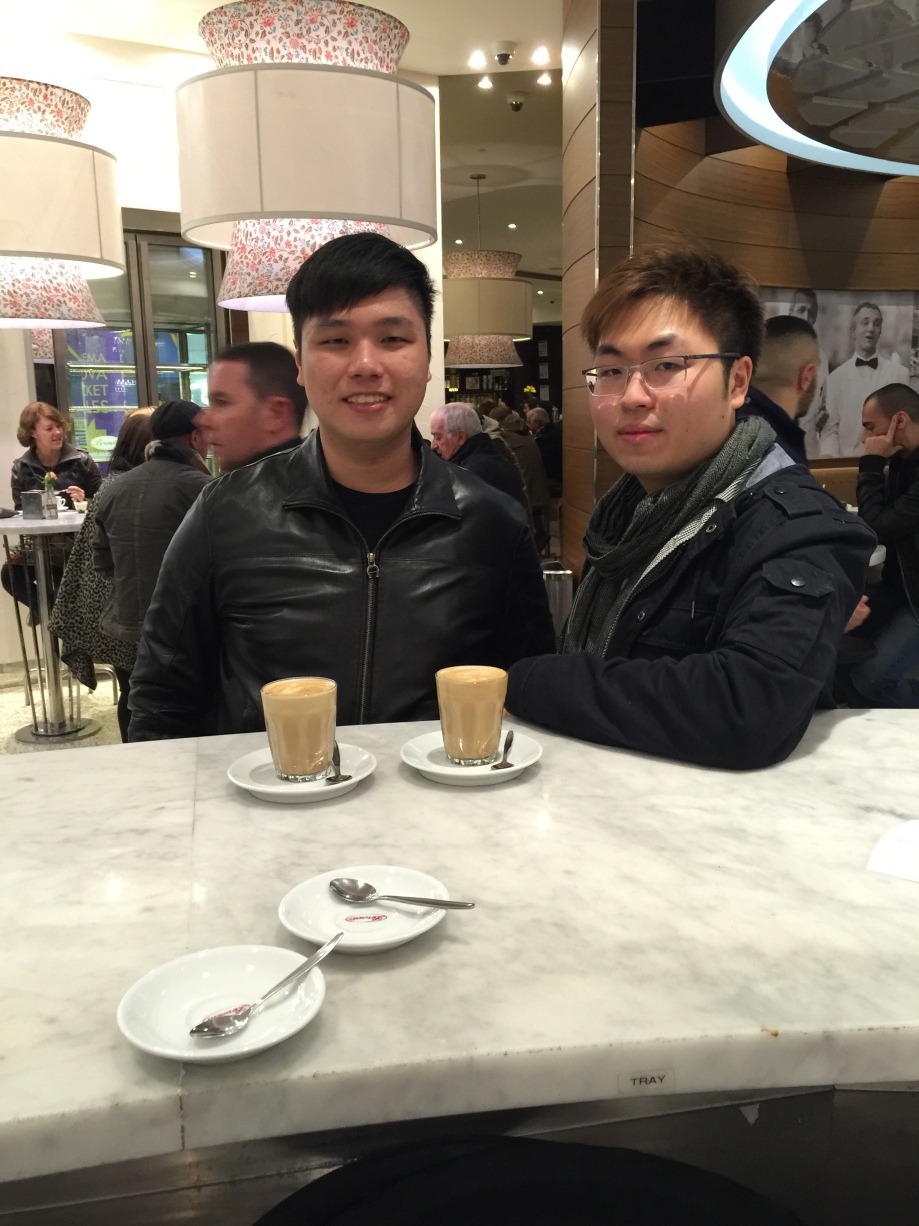 Brunetti serves up awesome coffee and the cakes here looks heavenly too. You can’t beat having some latte and the cold breeze around you. We share a little of the city we are in and some catch up. Our lives, schools, work and also places of attractions in Melbourne. Ah, I might have also learned a little about driving here from him and also knowing how to read the parking signs, since street parking are pretty common here and the charges are quite complicated. 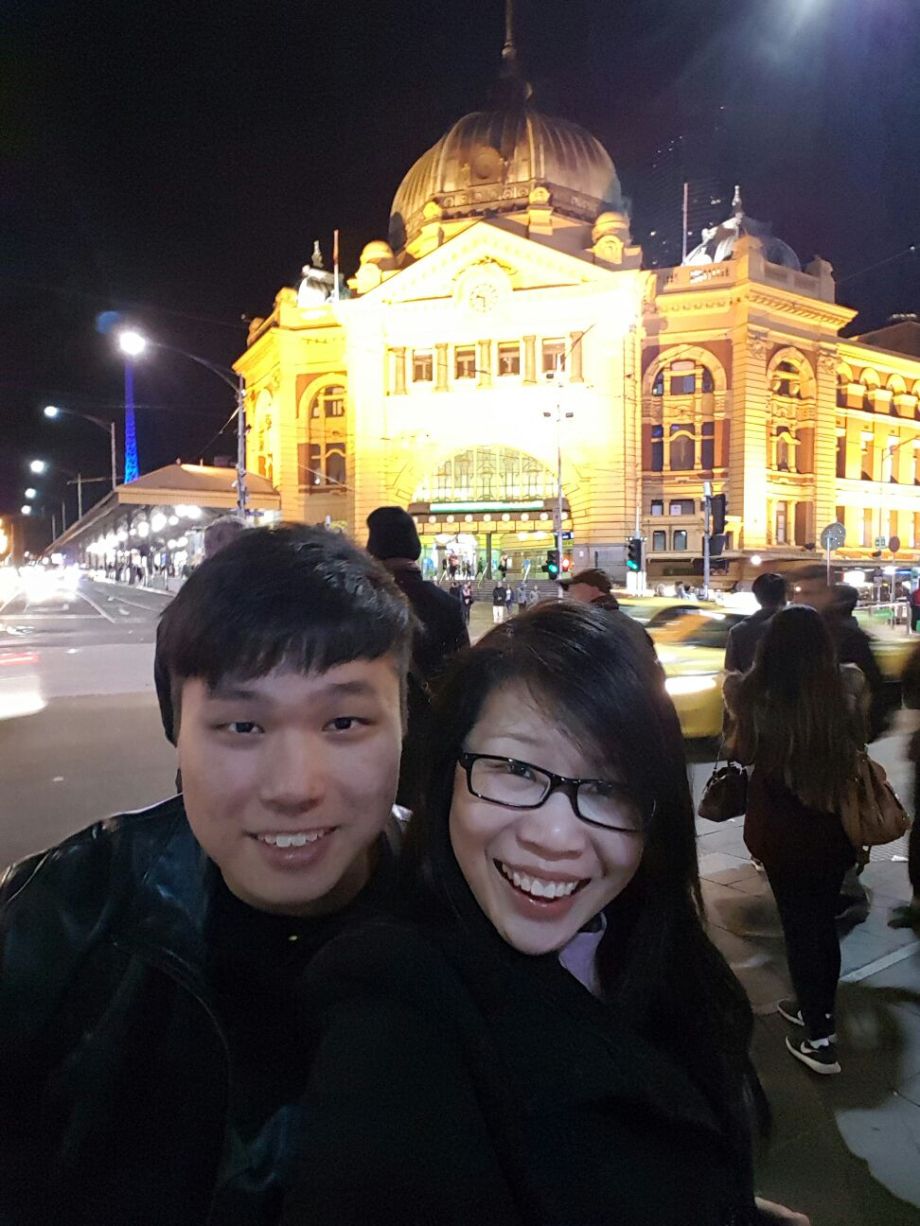 On another night, I met up with Siying, my friend from NYP, it’s such magical that we are in the same city at the same time, even our hotels were minutes apart only. After meeting up at her hotel, we went for a little walk around town, doing a little night exploring and see how the city is at night. We had actually thought of getting something sweet but were too full for it. But we are definitely hands down for pictures and many many snapchats too! With the gorgeous architectures in this city we can’t do us justice if we didn’t stop by all the attractions and pose for photos. Ahha, we might have do some shots on the tram line too!

We also did stop by Coles for a little late night supermarket shopping! I always do love walking through markets overseas and I am so glad to have Siying with me this time around.I have also asked Siying to share a little on her views and thoughts in this gorgeous city.

“As I walked along the roads of Melbourne, captivated by the mix of new and old architectures, amazed by the old tram systems, intrigued by the beauty of the city, I hear “Hey, how are you?”, “good morning”, “have a good day ahead”, greetings after greetings from strangers. It’s really lovely to receive such simple gestures from people that you’ve only met for the first time. Although it may be nothing unusual in Melbourne and some of the other cities I’ve been in, it certainly is something that I’d love for us to cultivate back in Singapore. Melbourne is certainly a beautiful city with many friendly people.”

I hope both you guys, Siying and Roy are reading this! I really enjoyed the night walk in town with you, Siying and hope to do so again. And, Roy, It was really nice to meet up after a decade and I hope the next one won’t be another decade, anyway we had a pact to meet up either in Melbourne or Singapore. A dedication post to the both of you and life is great!