The name definitely lives up to it’s reputation and glamour, The Refinery is a sophisticated French bistro set in a old opium manufacturing plant, probably why it’s quite secluded and hard to find. It’s a great place given the atmosphere and price. Make your way through a seemly impoverished and rundown entrance, you will find a nice and relaxing courtyard that trees are lighted up in the evening, making the place so much better. In the courtyard, besides The Refinery, there are similar elegant restaurant and beer gardens. Although without pre reading and research it will be impossible for me to find this gem, despite it being only a street away from my hotel in Saigon. Despite the abundance of French food in Ho Chi Minh, The Refinery seems like a popular place, full of people by the time I get there, I had actually wanted a outdoor table to soak up this great environment, a pity that it had all been taken up L. You do find that the location was actually a selling point of this bistro, while enjoying my meal I had actually managed to get away from the madness of this city, the traffic, the continue horning and people. Furthermore, I am feeling so refresh after that amazing body message.

The Refinery is open daily from 11am till late with brunch service available from till 4pm on the weekends and set lunch on the weekdays, I have read many reviews that their brunch are actually quite popular, with complimentary chocolate fountain and a dedicated kids corner with a baby sitter provider. It seems like the key selling point for The Refinery to be relaxing and also a place to get of some stress. This is probably helped by the comprehensive bar with more alcohol that you can ever, this is an amazing choice of 17 new and old world wines that you could be ordering by the glass. Look at that ! It’s probably everyone dreams.

Although prices for the food and the alcohol are probably higher than what most of the locals could afford it is pretty affordable for the tourists with around 12-15 SGD for their main courses. I would think that the price range is pretty good when compared to what we would be having in Singapore. Although the atmosphere is better outside J, inside the restaurant is actually not bad, after all you get some pretty good fresh air. We ordered 2 starters for the four of us to share which are the Crispy Chicken Strips with Garlic Mayonnaise Dips costing 90,000 VND and the Sesame Chicken & Swiss Cheese Crostini from the Bar Menu costing 75,000 VND. Pretty hefty right? It equates to about 6 SGD and 5 SGD. I would say that the chicken is pretty normal that you would expect, crispy and tender but the dips was definitely a plus point. It was really good, in fact it actually taste like a cheese dip, it was creamy to a just right extent and also allowing you to taste the fragarence of the garlic. The Crostini was just normal but filling.

To complement these I had ordered the Milkshake costing 85,000 VND, it was really satisfying, given that at that moment I had a sudden craving for some thick American milkshake and these definitely fits the criteria. FYI, it was actually mentioned that the ice cream used in the making of their milkshake are fully handmade by their restaurant, so is their breads…… I actually wanted something alcoholic but decides to skip it since I had quite some drinking during lunch earlier. Oh blame the cheap beers you can found everywhere in this country! While my friends had the Homemade Lemonade costing 25,000 VND, it is just normal and super sour for a reason which I think might be due to this. My friend actually ordered this because it is cheaper than WATER! Water actually cost 50,000 VND double the price of the lemonade, and since lemonade as mention in their menu consists of Lemon Juice, Mineral Water and Sugar, I understand why it’s so Cheap. Something for the restaurant to reflect for.
Soon after some exploring of the restaurants, taking pictures and chatting our main course arrived. I had ordered the Fettuccine with Chicken, Bacon, Mushrooms & Roasted Tomatoes in Cream Sauce (235,000 VND) while my friend had the Pork Cutlet with Apples and Radicchio with Mushrooms, Bacon and Cream Sauce (250,000 VND) and the Gourmet Cheese Burger with Roasted Shallots, Bacon & French Fries (260,000 VND) which according to his is awfully satisfying given the size of the burger. We had to even finish the fries for him. The Pork was actually quite hard but the apple sauce was really excellent, just excellent. In the end this fantastic dinner came to about 1.4 MILLION but it was great and here are some of the pictures of the dishes. 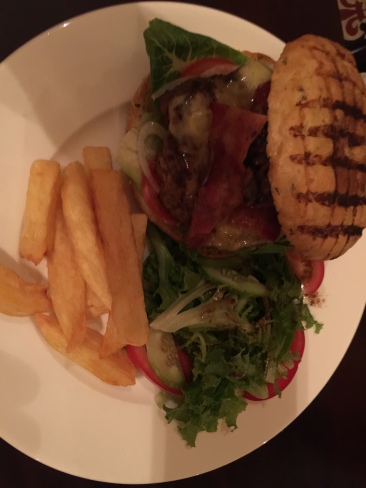 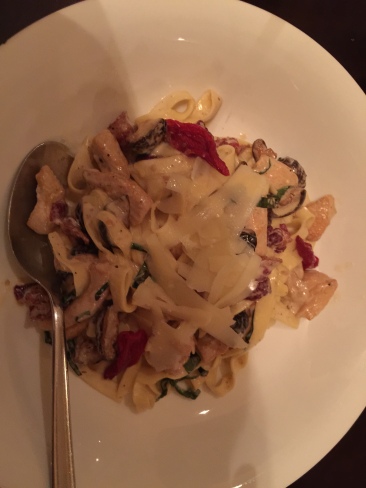 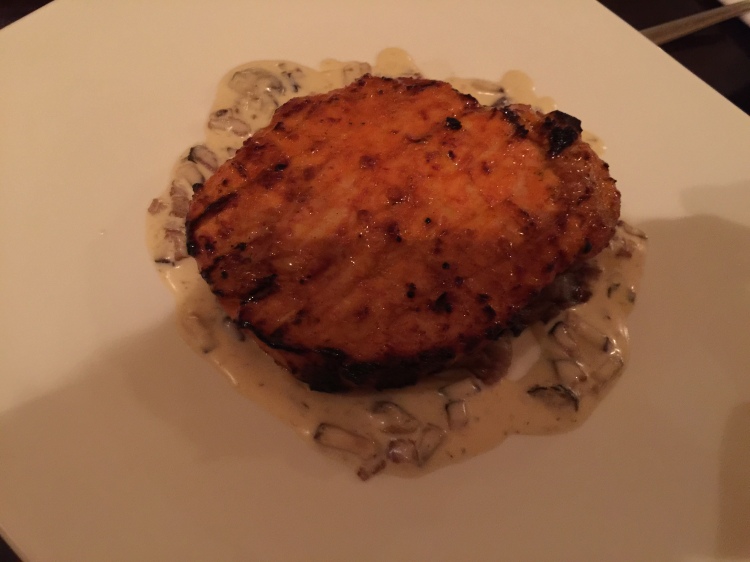 To conclude, I won’t say that it’s really super outstanding or anything, like my lunch at The Ledbury in London but really worth making a trip down to enjoy your night here, besides the restaurant is nearby all the main sights in Ho Chi Minh. To end off this are the rest of the menus from The Refinery. Stay tuned for more stories from Ho Chi Minh City.